To be more detailed, the 393 has a larger form factor and consumes more current than the 269, but the 269 motor has roughly 70% of the torque that a 393 has available. Last year, the limit of 393s was removed. My team used all 393 motors this year, but it required the use of some preplanning and a power expander to help divvy up the electrical load. (could someone explain the cortex circuit breakers?) A fair trade off may have been to use 4 269s on a subsystem and saved the weight of an additional battery, as well as reducing the risk of brownouts or blackouts.

I don’t think there’s any reason to use 269s aside from cost, maybe? Also, I guess if you don’t have a power expander, you might hit breakers with 393s. Nonetheless, using the 269s will put you at a major disadvantage. In Gateway and other previous games, you were only allowed 4 393s (I think,) but now you can use 393s for all 10 of your motors, so there’s really no point in using 269s.

Changing out the gears depends on what you want to do with the motors. You can do either torque or speed. Completely depends on the application.

And we got a power expander

so that’s not an issue

Now is there a link on how to change out the gears for the 393’s?

Ill look on the PDF on the product website

Switching the gears is easy. Just unscrew the the four Phillips screws on the output side and the gears are right there. I don’t see why any team should opt for anything less than 10 393s, sack attack has certainly proven to us that if you make sure you don’t run them all at once too often you’re not going to have issues tripping breakers. The power is worth it.

If you want speed rather than power, yes. It’s easy, though.

Just to go into more detail about current draw:

A 393 will in fact draw *less *current than a 269 if they are both under the same torque load. Where issues arise with 393s is when you stall them, because their stall current is higher than that of a 269. You should be trying to avoid stall in your design anyway.

According to the president of VEX Robotics:

the 393 motor was designed to be a superior motor.

Credit for these graphs goes to jpearman. Both the graphs and the quote are taken from this thread:
https://vexforum.com/t/motor-torque-speed-curves/21602/1&highlight=motor+torque+speed+curves
The graph for the 393 motor may be out of date, as described here:
https://vexforum.com/showpost.php?p=309781&postcount=40

A 393 will in fact draw *less *current than a 269 if they are both under the same torque load.

Here are the torque-speed and torque-current plots according to the information on the motors’ product pages:
https://vexforum.com/attachment.php?attachmentid=7470&stc=1&d=1368082974
The red and black lines are for 393s, the blue and green lines are for 269s.

So what I should have said was: for a given torque load, a 269 motor will draw a bit less current but (except at low torques) a 393 motor will rotate significantly faster.

At low torques (less than about one inch-pound) it looks from the graph like 269s are better. 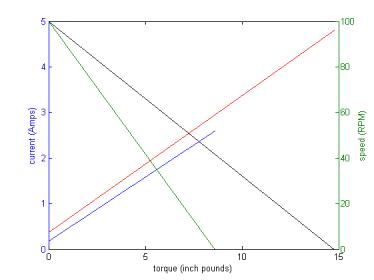 Here is a graph that better illustrates the point above about 269 motors being better under small loads: The point at which the 393 becomes the better option is when you want to use more than 2.38 Watts of power or when you have more than 1.1 Amps of current available.