Have you guys seen anything other than tray bots or tower bots? At the last competition my team went to, at least 80% of the bots were tray bots.

I’ve seen a couple of interesting designs, but none that are quite effective yet. The main reason being that none of them can hold more than 1-2 cubes at a time so people end up opting for a cube tube or a claw or just a tray bot. I saw a team use a mini cascade with a claw, and I’ve seen other teams make intricate lift designs with claws but nothing more than that. However, it is also early season here in NC so we’re yet to see what will come out of it.

Same thing happened over here in NJ. We had some very nice tray bots, but all the bots with lifts failed pretty bad including ours.

In TN, trays rule. I’ve yet to see a lift find much success. Except one 8 bar that is decent. I did however see an x-drive cascade lift with a mecanum intake and that was cool. And a passive wall bot.

Wait. How did this mecanum intake work?

For non-meta bots I’ve seen pushbots and clawbots here in CA. Now I never said they did well (except one or two that may or may not have gotten carried), all I’m saying is I saw these non-meta bots (and quite often lol).

it had two mecanum wheels on each side oriented so that the cubes would be forced up a vertical tray thing when they rotated. They were a decent tower bot. We scored well with them in our qual match together and they gave us a run for our money in the semis. Shout out to 3631J.

there was a bot that just sat there for 2 mins

traybots and lift bots are so broad that they encompass almost every possible competitive design. in a season like this where design convergence is very prominent, I’d say that any robot that isn’t a goofy is off-meta. even if its still a tray.

One of my sister teams has a cascade lift with a ratcheted intake that is made up of mecanum wheels. They have the intake vertically take in cubes into a tray, then they stack the cubes with the tray, and then stack on top of the preexisting stacks. They can also do towers really well.

In N Central FL, we are dominated by tray it’s and some push bots. Most of the robots with claws are 4 or 2 bars, but I have seen some DR4Bs with claws (one has an expanding claw). But the best robot by far is a tray bot. 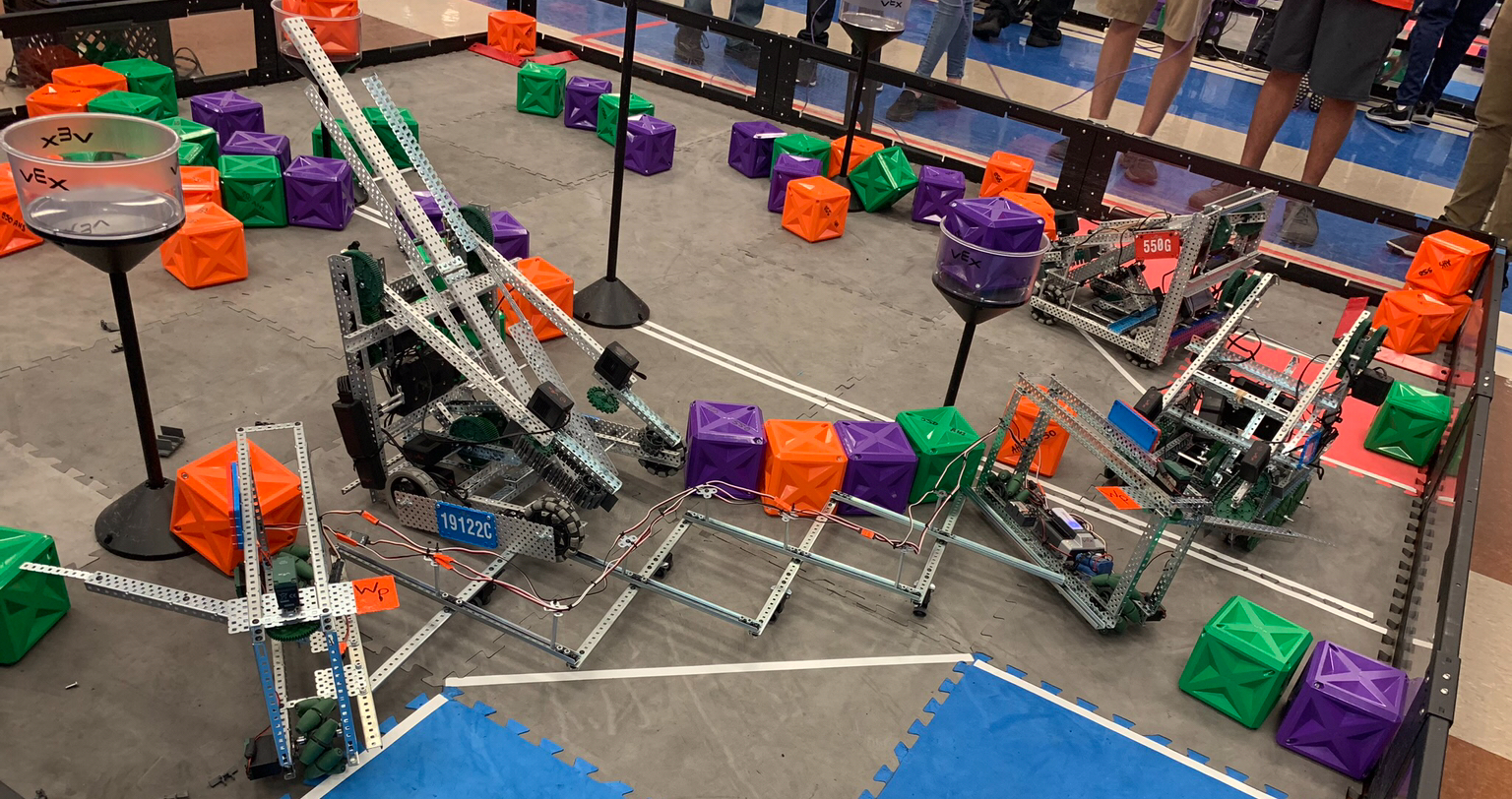 At our most recent competition we saw a somewhat off-meta robot - a RD4B with a tray. Here’s the catch - it was not combined, so the RD4B had a claw attached and was on the side of the robot with the tray in on the other side. It did not work very well as the design was not implemented the best but it was definitely an interesting design.

Wall bots can be good this year, but in Ohio. It is only Tray bots or pushbots. We have a towerbot that is good There are other but they don’t work. Non meta can be good.

I use to have a simple tray + wall that blocked off the big zone but it was bad because people can just block you.

Reason: I am in this photo

there have been bots with a tray but instead of intake on arms intake bolted to tray and the tray tilts from the where arms are usually mounted. If you want to see that look up the SC vex JLMann livestream vid, audio isnt great but video good

combined, so the RD4B had a claw attached and was on the side of the robot with the tray in on the other side. It did not work very well as the design was not implemented the best but it was definitely an int

I CALLED THIS LOOK AT THE DR4B VS TRAY THREAD