Our experience with Ratchet Mechanisms in Change Up (62X)

Our team started using ratchets this year and thought we’d share our experience with them, what we used them for, and some problems/solutions we came up with.
disclaimer: these mechanisms were heavily inspired/mainly designed by these videos:
https://www.youtube.com/watch?v=VskZwlPGRRg&list=PL4EEOIgibqOv_e8FHXL4WJ3WTaYPjU3KQ (they only let me put 2 links so here’s a playlist)

We used ratchets on 2 mechanisms: one in the intakes, another on the back rollers.

In the intakes, the mechanism allows intakes to rotate outwards and increase its angle, although it sacrifices the ability to outtake. The intake motor is on the axis of rotation of the intake arm, which powers a gear. this gear has a ratchet flap on the intake arm pressuring on it, and it’s configured such that it simply intakes when the motor spins one direction, but when it spins the opposite direction, the ratchet flaps placed locks in, and spins the entire arm outwards, widening the angle of the intakes. We used 36 tooth flaps as the gear and for the flap, made it with a cyan screw with 1 spacer and a keps nut (the gif is outdated sorry) on a collar, which is secured on a long screw at the intake arm’s c channel with another collar+ long screw being pulled by a rubberband. we’ve tested a lot of combinations and found this to work the best, although it can also work well enough with the 6 tooth sprocket with different flap configurations. This is particularly useful when intaking multiple balls on the field at once or getting the intakes out of the way to decrease interference with field elements, though the downside is that it can’t outtake, and a strong rubberband suspension on the intakes can cause the motor to overheat, which may be solved using a torque motor (but we haven’t tested this out).

https://drive.google.com/file/d/1lWOSyuZBXlEjq6bDAGwT0rNWnaOc_BkB/view?usp=sharing (sry they only allowed 1 image)
But to compensate for the inability to outtake at the intakes, we added an outtake mechanism on the back rollers with our second ratchet mechanism. which is made possible operating only on 1 motor (we assigned 1 motor to front rollers and 1 motor to back rollers, since that way if one of the motors burn out for whatever reason that happens quite frequently with us, it can still potentially bring the ball up and work), thanks to an additional ratchet mechanism that spins the bottom roller in 1 direction no matter which way the upper roller goes. the motor directly powers the upper roller and the axle it’s on, which also has 2 ratcheted gears:
by ratcheted gear, I mean a gear that only spins when the axle it’s on spins a particular way. this can be done by having a small gear (in our case, a 6 tooth sprocket) spin with the axis while having another big gear (24 tooth sprocket) be free spinning (circular hole instead of square, independent of axle) and with a ratchet flap pressuring on the small gear with a similar flap as the intake ones. the big sprocket now only spins when the small sprocket moves in the direction that makes the flap lock in and spin the big sprocket.
there will be 2 of these on that axle, each locked in to spin the direction opposite to each other. one that spins the way you want the bottom roller to spin will directly power it via chain, while the one that would spin the opposite direction will have to change direction via gear to gear interaction and then be chained. so far, the outtake mechanism has been working without problem.

Since no one has said it already, you guys did a great job with the animations. Really detailed work that illustrates the functionality of this mechanism. How have frictional losses affected the performance of the intakes?

Thank you so much!
So far there really hasn’t been any noticeable frictional losses when intaking, especially since the flap only needs to apply a little bit of pressure to work (about 1 rubber band worth), and even less when you use the gear instead of a sprocket

How is it that your intake arms rotate inward but also starts intaking after?

Setup:
On the intake, there is a ratchet gear that it coaxial with the motor and it’s shaft. The intake pod is placed below it, and there is a ratchet tooth connected to the intake. The ratchet tooth is rubber banded so that it remain in contact with the ratchet gear. The intake is not connected to the shaft, that is, it free to spin back and forth without the ratchet. The sprockets and chain that power the intake are also coaxial with the motor and it’s shaft.

Here is how my team did our ratchet intakes: 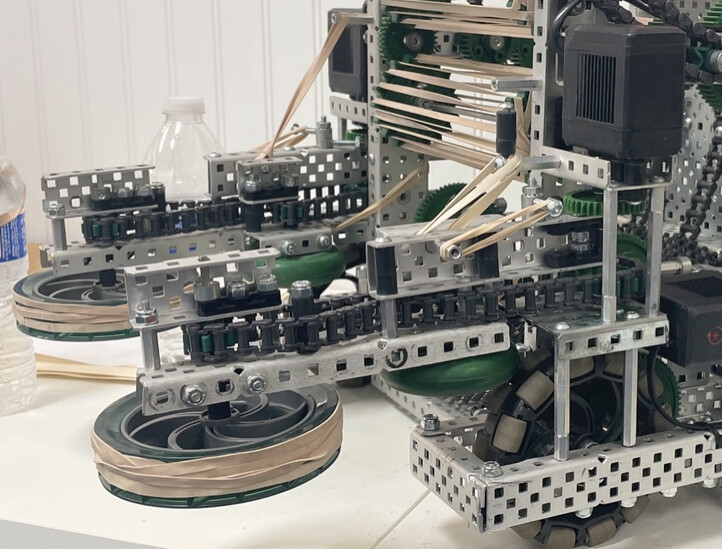 *Note that there are several ways to make the ratchet and we didn’t add a gear ratio as we wanted instantaneous actuation (I would not recommend having an actuation rpm over 200 rpm). * 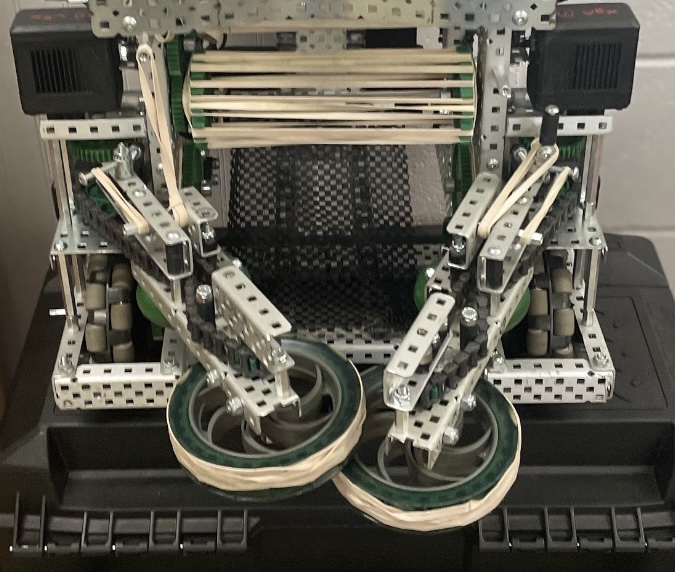 Upon actuation, a simple mechanical lock folded into place. This is what allowed the intakes to intake without having to actuate. Now they have become flipped out, and ready to intake. 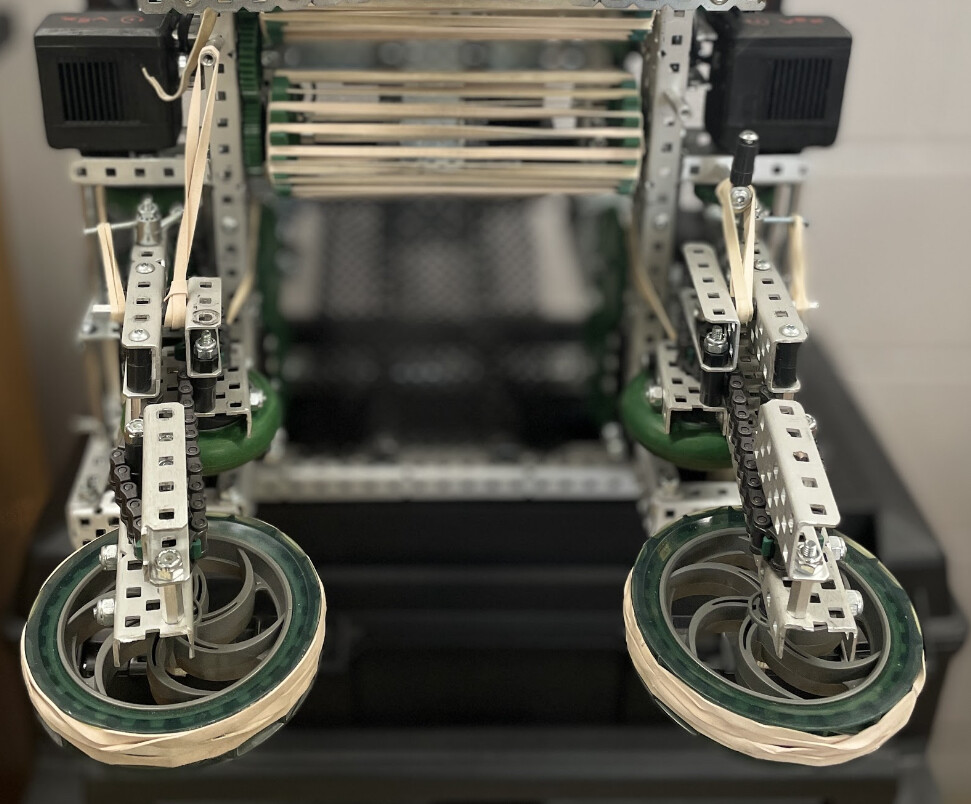 Thanks for the explanation, but I’m still unsure—perhaps I’m misunderstanding.

My understanding of your design is that when the motors spin outwards (that is, as if they were going to outtake), they engage the pawl and the arms fold outwards into place (and then are locked there). When the intakes spin inwards, the pawl slips over and the intake wheels spin intended. Am I getting this right?

In the GIF that OP provided, it seems like they not only can fold the intake arms outwards, but can also fold them back in (until hitting a hard stop at which point the intake wheels will spin). This second part is what I’m confused about and I believe that is distinct from what you described. (I watched their video and confirmed that their intakes can fold inward as well, though whether it’s by the same mechanism I’m unsure). Maybe it is just a case of it being easier to fold the arms inward until the hard stop is hit—though I wouldn’t know as someone suggested.

arms fold outwards into place (and then are locked there).

This isn’t quite correct- they aren’t locked there. They should hit a stop, and the pressure of the ratchet will hold them there.

In the GIF that OP provided, it seems like they not only can fold the intake arms outwards, but can also fold them back in (until hitting a hard stop at which point the intake wheels will spin).

Basically, if you built your ratchet correctly, the motor should find it easier to pull the intakes back inwards than to spin the wheel, as it would be fighting against the ratchet to do that. Once it hits the stop, it becomes easier to push the ratchet arm back and spin the gear than to push through the stop.
Does this clear it up?

Does this clear it up?

Here’s a video of our intake actuation (excuse the horrible quality, school iPads have terrible cameras) that should hopefully clear some things up. 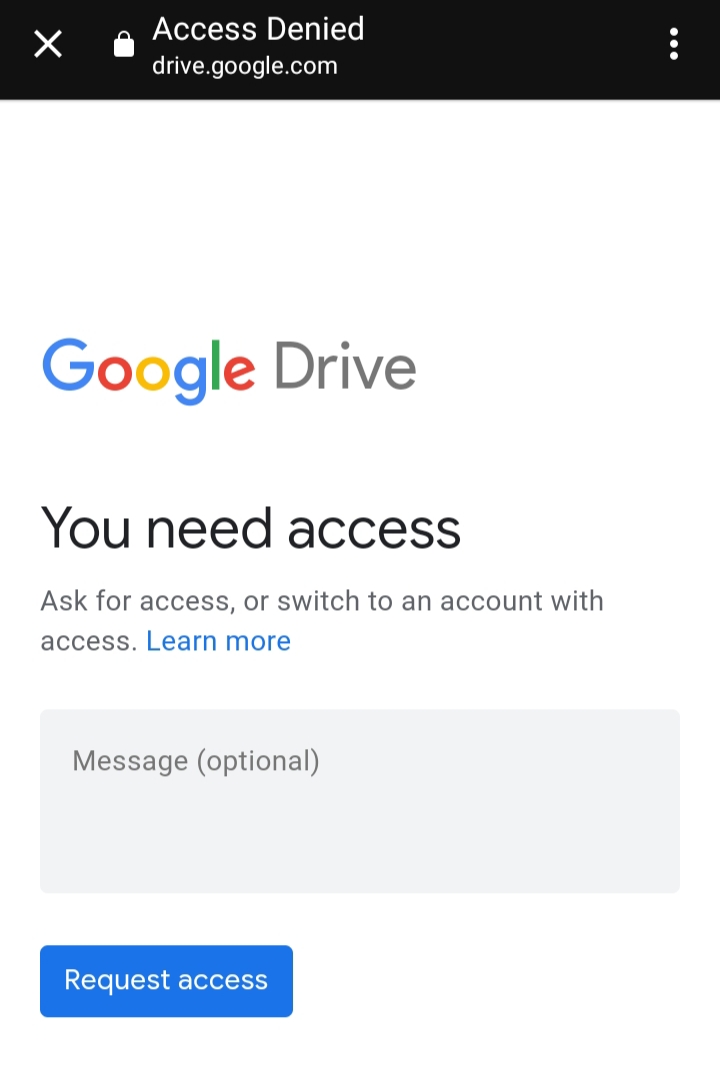 Link should be working now