Teams 20785A and 10955M are proud to present a collaborative idea that works alongside VEX’s new Live Remote Events - VEX Remote Queues (VRQ)!

What is it?
VRQ is a community where teams can communicate to create practice matches (both casually and competitively) around the world in an unofficial manner that utilises the Live Remote Event software. The community is in the form of a discord server, which can be accessed here: VRQ Discord Server

Why did you make it?
VRQ was developed following the Town Hall Webinar (09/16/2020) and announcement of the Live Remote Events. We noticed the highly competitive aspects of this new system, with teams being able to practice and compete virtually, and how big of an impact it will have for teams competing this year. Combined with the fact that many teams will be unable to attend as many competitions as previous seasons and may be stuck at home due to the COVID-19 pandemic with not much interaction with other teams, we have tried to develop a community that everyone can use to help in practising and communicating with others both nationally and internationally.

Who is it for?
The system is currently made for Middle School and High School teams competing in VRC Change Up, and will be developed for VEX U upon further information being released on the 1st October 2020.

How does it work?
In short, teams can either join Casual or Random Queues on the Discord server.

The queues will be open 24/7, therefore no matter what timezone you are in, your team can still practice. We also hope to hold multiple virtual scrimmages throughout the season.

A more in-depth explanation (including rules and a step-by-step method for using the queuing system) can be found on the Discord server.

What are your aims for VRQ?
We hope to bring together teams from around the world to continue practicing and competing unofficially in the same manner as previous seasons, despite the limitations we may all face. Our aim is for the queues to be utilised extensively, so teams can be as prepared as possible for their official competitions.

We do understand that it is early for something like this to be developed, however we want everyone to be as prepared as possible this season. With VEX releasing more information about the Live Remote Events within the next few months, we will adapt our system accordingly. Furthermore, we would appreciate any feedback or suggestions about VRQ, which can be done through the Discord server or here on the forums.

Thank you for taking the time to read and learn about VRQ!

Tomorrow from 1PM-2PM EST, we will be hosting a livestream on the discord server (https://discord.gg/NeWMJUF) where teams will be practicing in driver skills and a make-shift virtual driver-only playoff. We will also be integrating with the community and answering any questions you may still have concerning the server and queueing system – a FAQ of all questions asked during the livestream will be released shortly after.

Why are we holding this event?
The aim of this is to try and integrate with the community more and allow teams to become familiar with the streaming system and potential setup prior to the release of the Live Remote software on 10/02/2020 - we want everyone to be as ready as they can be for the release date so to take advantage of the queuing system as much as possible. We are also aware that many teams are unsure of whether Remote Live Events are as enjoyable as normal competitions, so we would like to show you how fun they can really be!

Participation in the Livestream
If you would like to practice and compete unofficially in this event, please message me on discord (dqew#9469) and join the Discord server . Participating will definitely give you the most familiarity with how the system would work. Requirements to participate:

If you would not like to participate but want to watch the livestream, then you are more than welcome to! All general voice channel rules will apply, and you may stay unmuted at certain parts of the stream as long as you are sensible. We encourage you to invite team members and friends too.

Thank you for reading and we hope that you enjoy the event!

EDIT: We understand that we have given very short notice about the event, however the reason for hosting it tomorrow rather than next Sunday is that VEX release their software on the 2nd October and more people are likely to be available on Sunday to integrate within the community. We want to give teams a good amount of time to be prepared before starting the queuing system. We understand that it may not be convenient for everyone, but the earlier we start the more teams can take advantage of practicing through the queuing system.

Seaquam Robotics up in Canada is super excited to participate with this if we can! We have a field set up and ready but we are having trouble with the practice match system. Are you using the REC foundation’s practice match system for these matches or are you just running it through a discord video chat?

Hello, I apologize for the late reply. You are most welcome to join! The VRQ system will be using both Discord Voice Chat and the RECF Software. We are currently testing out the software this week so we can use it in our future scrimmages and see how it can be integrated well with Discord. A discord queuing bot has also been made in the server so that your team will automatically be brought to a voice chat to practice with other teams around the world. It would best if you contact RECF if you’re having trouble with the software which is located at the bottom of this link: https://www.roboticseducation.org/documents/2020/10/live-remote-practice-match-system.pdf/ , create a forum post or email your RSM. The VRQ discord server can be found here: https://discord.gg/NeWMJUF

On 11/21/2020 from 3PM-5PM EST , we will be hosting a scrimmage through VEX’s Live Remote Software where teams will be competing unofficially in practice matches, taking advantage of VEX’s new form of competition. The whole event will be livestreamed, and a recording will be available on YouTube later.

Participation in the Livestream
If you would like to practice and compete unofficially in this event, please message me on discord (dqew#9469) and join the Discord server. Participating will definitely give you the most familiarity with how the system works before the real thing. Requirements to participate are those listed by RECF, and joining the VRQ Discord Server as this will be an alternate form of communication to you.

If you would not like to participate but want to watch the stream, then you are more than welcome to - a Twitch link will be released on the day through the Discord server.

Thank you for reading and we hope that you enjoy the event! 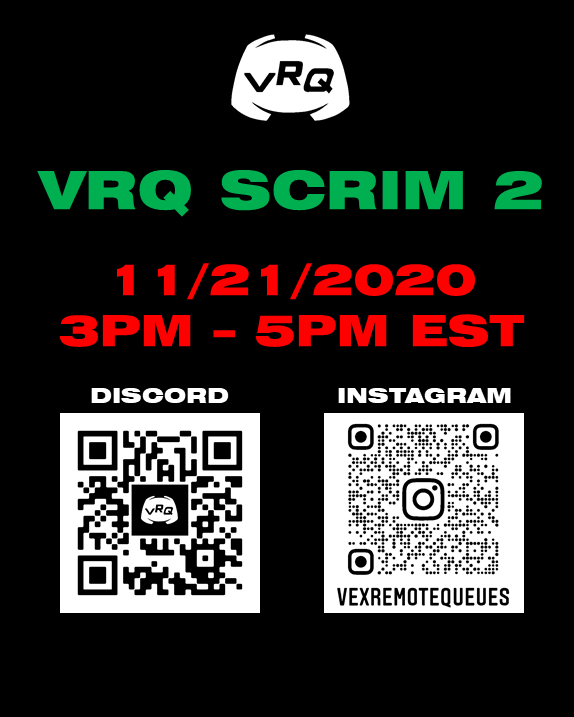