Do you think the highest possible score of 315 points will be achieved in Slapshot?
(only official events count)

I found it interesting how he treated the green bumpers as obstacles and not opportunities.

They cast shadows that are hard to get the pucks into

Yes, I read his post. My statement still stands.

Following up, since there’s interest.

I also made a mistake when accounting for clearance around the green obstacles.

The actual non-shadow, direct-shot area is thus 329.46 square inches, which is enough to contain 45 discs with optimal packing.

The following drawing shows how I computed this area (represented by the cyan hatched area). The red lines are the direct shadows of the green obstacles. 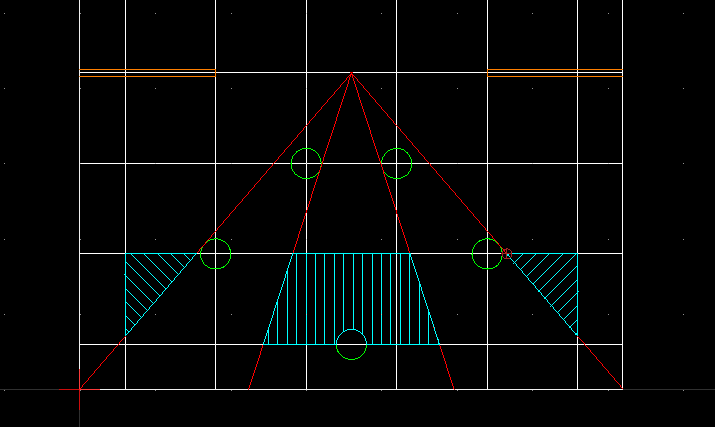 But you can move side-to-side; you don’t have to shoot from the center.

Might be, but even without an h-drive, you just drive not quite into the center and all of a sudden his lines aren’t accurate any more.

Yes, and it turns out that the center doesn’t even offer you the largest non-shadow direct shot (no bounce) area in the 4-point zone.

This drawing shows another angle, which lets you reach 419 square inches. 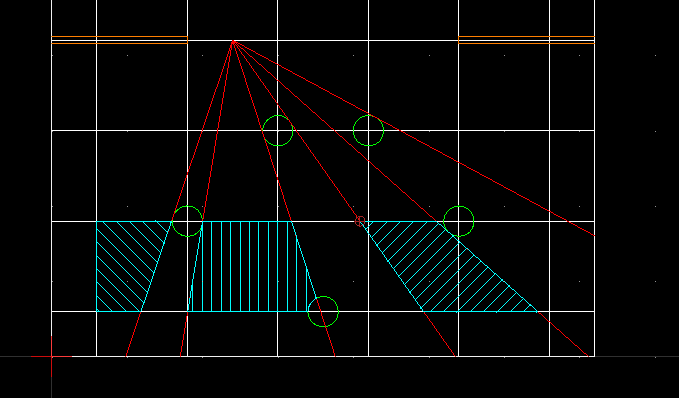 And yes, you can move around to reach even more area. However, moving between shots takes time.

It’s interesting to compare this to Pitching In, where some of the best robots could hold 6 or even 8 balls, and shoot them 2 at a time from the same ideal location (back up against the glass). They could literally drive to the right spot and then press the “shoot these all in” button on their controller.

Whether you are parked in the center of the rod or the edge, you at least will need to aim the robot between shots here, and possibly move as well.

Though perhaps there is a “perfect” location and angle from which you can take 45 consecutive shots and have them all bounce/land in the 4-point zone… a kind of perfectly controlled chaos.

I graphed out a bunch of possible shot spreads under the assumption that collisions are going to put some amount of discs in the adjacent zones. So, the assumption is that if you’re targeting the 3-pt, about half of the misses go into the 4-pt and half go into the 2-pt. If you’re targeting the 2-pt, I put all the misses into the 3. Then I modeled each target zone for the following spreads:

And the 4-pt target zone numbers surpass the 3-pt so quickly that you only need to hit 35 in the 4-pt zone (missing 5 into the 1-pt and 5 into the 3-pt) in order to pass the maximum score for a 3-pt targeting robot. 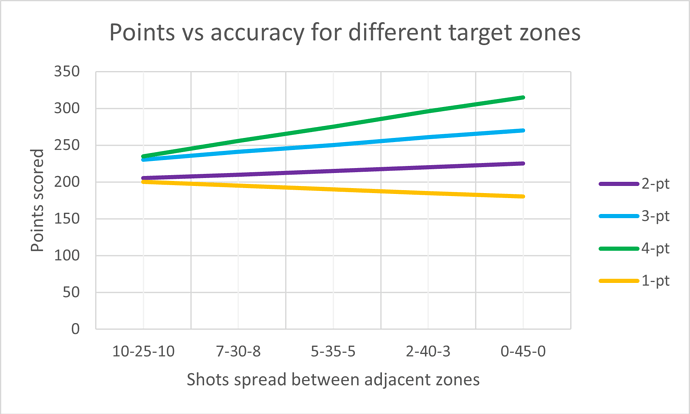 Now, I also think getting a perfect in teamwork is also a nope, just from the sheer odds. Maybe in a local tournament where you get paired up with folks you practice with relentlessly.

Yep, the max score is 315. I made a public spreadsheet for calculating scores, if you want to try it.

We are talking about max score for the game, not for a particular robot. Right? Otherwise, I guess I don’t know how I was supposed to infer that he was talking only about 3-point robots.

You caught me. I forgot that both robots could trigger the +1 bonus in a teamwork challenge.

Could a wiling and helpful mod please edit OP to show 315 is the true top Teamwork score?

My apologies, I thought you were referring to a different reply.

You are the poster so you can edit it. (If you don’t know how it is Described in the basic user guide)

you can’t edit OP after a certain amount of time (not sure how long, but i think that it has been to long for @mtaylor to edit it).