Stacking on stacks And Usagi: A Manifesto 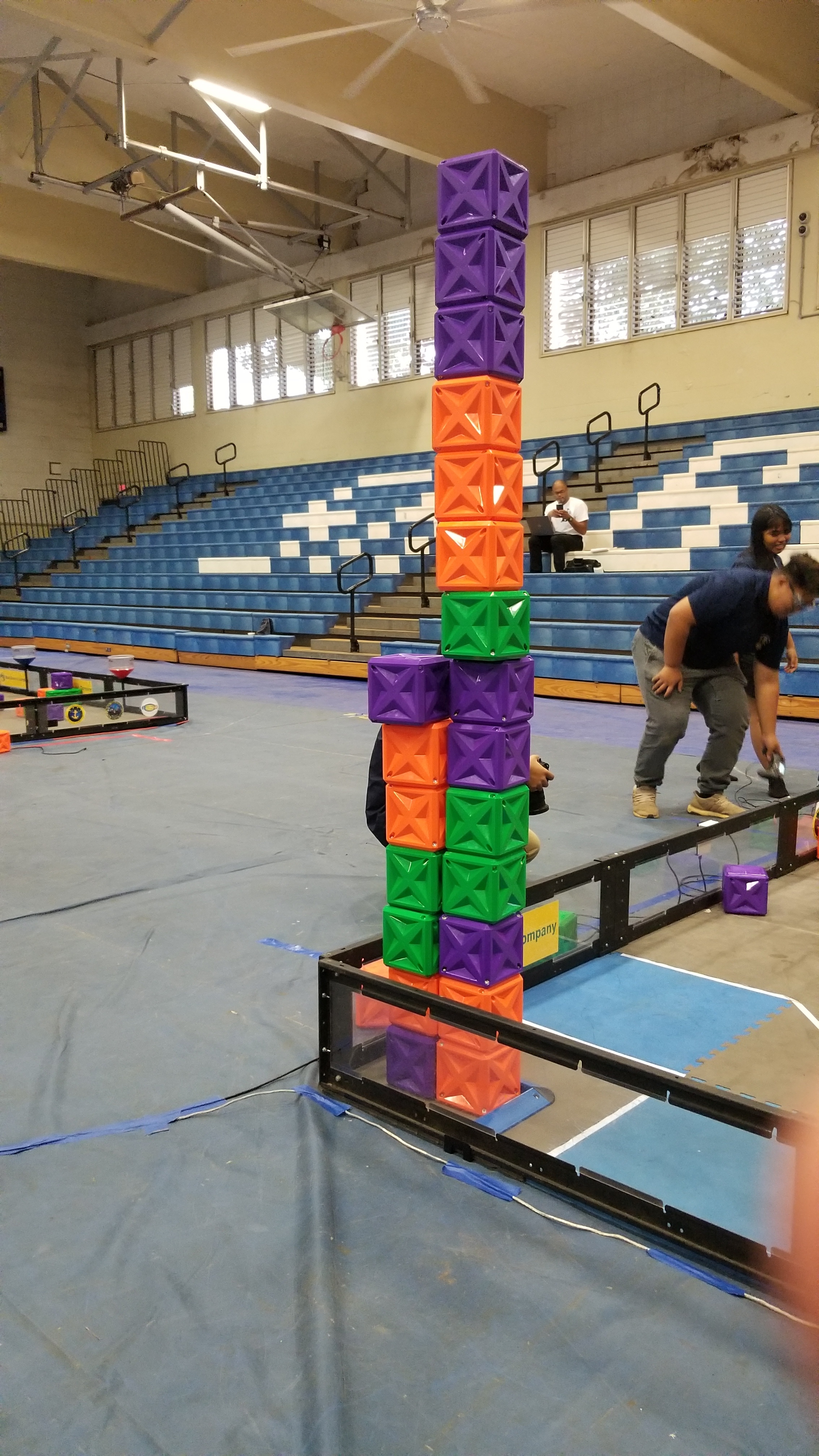 14 stack done in practice in Maui by Usagi 2 (There was a fan above, as the event was held in Maui High School’s gym. The stack was slowly moving side to side due to the draft by a few degrees)

13 stack done in the shop done by Usagi 2

I’ve seen stacks as high as 17 from Lift Trays. The main limitation was the ceiling height.

Match based:
Stack on stacks is the future of high-level competition in Hawaii. Usagi style robots are highly specialized to swap towers and dominate the field. Their main limitation is tray size (11). -I believe that at higher levels of competition Usagi will capitalize on available scoring space with stacks on stacks. Also, Usagi gives more versatility and strategy options. They can play the role of a stacker and in the last couple of seconds go around the field swapping towers. Their ability to hold multiple cubes allows them to dominate towers without having to chase cubes around.

Skills-based:
Alright, so not so much of an argument for stacking on stacks but rather an argument for Usagi. Stacks on stacks have less relevance in skills as skills are more tower-based. In skills, Usagi can score multiple towers in a row without having to find more cubes.

Here’s a match as I see it:

Usagi A starts closer to the wide zone. It deploys as it moves towards the second to left premade stack and quickly intakes the stack. It then strafes over to the left and grabs the other 4 stacks, creating a 9 stack. It moves into position or even scores the stack into the corner as the autonomous period ends.

Usagi B starts closer to the small zone. It deploys before moving towards the second to right premade stack. It grabs 3 of the cubes on the ground before swerving to grab the other 4 on the ground to its right. It then stacks or prepares to stack those cubes before the autonomous period ends.

In driver, Usagi A finalizes its stack and moves to create a solid stack of “alliance color” (Orange for Red). It stacks a second stack before the 1:00 mark. Then Usagi A moves to score green cubes into towers (high tower first) If the opponents lack a towering robot or have a clear advantage in all colors then a stack on the stack may be warranted.

Usagi A could be replaced by a normal tray robot but as I see it at high levels of competition longer tray isn’t a benefit in auton because of the number of cubes that can be reliably acquired in that slot by normal tray robots. As well, I prefer the Usagi robot’s tower swapping ability.

Usagi A is likely to be a more tower oriented variant, with a 1m lift and 4m drive base to dominate towers. Stacks on stacks with this variant may be limited to 6-5 cubes.

I believe that’s a bridge which is easy to cross. I’ve gotten stack on stack decently reliable to where I’d be comfortable to do it in my matches next week (10/26 West Oahu LCC) Stack on stack technique differs from team to team but I believe that by January Hawaii teams will consistently stack on stack.

To be perfectly clear: I’m projecting. Hawaii states are in January.

I’ve seen stacks as high as 17 from Lift Trays.

Quite a robot! You guys are ahead of the curve. I expect stacking on stacks will become more and more commonplace as designs begin to converge on the singular meta.

Stacking on stacks allows for versatility, especially in quals when you haven’t a clue who you’ll be with or against ahead of time.

At some point, we’ll see the point of diminishing returns between tray size and intake speed. If we still want larger stacks at that point, we’ll need to stack on stacks. Additionally, having the capability to do so means that you can very quickly intake about 7 cubes, rather than having to slowly intake 14.

However, a point against stacking on stacks, which its opponents have adamently pointed out, is that there are only 66 cubes on the field. Ideally, you want to stack most of them for yourself, but your opponents will get quite a few for themselves. An average 6 stacks of ten is 60 cubes, leaving 6 for tower play.
So that could be a point against stacking on stacks and the extra motors required to do so.

Despite this, however, I do think that stacking on stacks and the versatility it allows is worth the aforementioned drawbacks thereof.

Have you considered beyond the design capabilities? Such as the 2-3 motor drive? That would be a severe disadvantage with how much defense is being played in some areas. How is this in Hawaii?

And then, as presented above, what about cube limitations on the field? With infinite cubes, the traybot lift (which I perfer over Usagi because it’s more intuitive; I also hate “schlong”) is definitely superior. But, really, larger trays can clear the whole field, I think.

Again, as above, the versatility of the tray lift design is amazing.

Another downside to large trays is the maneuverability of Them. I don’t have any firsthand experience thereof, but a considerably long robot could be very hard to maneuver around towers and the like.
(Another reason a small traybot on a lift is better in my opinon.)

To be clear, I am in favor of the lift traybot design. I am merely pointing out counter arguments to address.

And assuming you didn’t know what a Lift Tray was, it’s a tray mounted on a dr4b

In Hawaii, defense is pretty sparse. I don’t think it’ll be a problem in terms of Usagi being weaker drive. Schlongs use 3m drive with the middle as a booster wheel, giving them ~75% of most drives. In my team there is a one motor lift tray robot.

I believe that while yes longer trays can stack more, in autonomous the amount of cubes we cam reasonably expect to be gathered is limited to 8 or 9. As for the rest of the match, Usagi don’t suffer in maneuverability. They’ll just use their towering ability to make up for a shorter length or stack on stack.

As for maneuverability, I believe it’s a moot point. If anything, lift tray are able to get away with shorter trays if they stack on stack. Turning and moving, they are just about equal if not better than robots in my region. If there’s one thing it’s that lift tray are harder to squeeze down to size, with few exception (Sarah).

IMO I think it would be nice if we could test usagi and any normal traybot with a four motor chassis and have them pushing each other to see how big of a disadvantage one less motor is, or even if it is a problem.

I’ve done that with a sister team. My bot is an “Usagi B” so it’s fine to have a weaker drive. I’m easily pushed by 4m 200rpm 4" wheeled drivebase. I can resist from the front and back through. For Schlongs and “Usagi A” they’ll have 3m or 4m straight drive so it shouldn’t be an issue

E: for towering I’ve not had any problems with defense even against my D team, who can be a bit aggressive

What’s the difference between usagi A and usagi B?

Check original post. It’s a difference in the role that each robot plays. For Usagi A it’s less of a deal breaker to have limited or no stack on stack ability.

I personally think that the tube claw thingy on a DR4B will be the meta simply for how fast it can pre-stack as well as how accurately and quickly it can drop its stack.

good design you have going, I have a few teams who are trying similar ideas.

I agree. It’s way too dependent on having a good partner

I disagree, it’s just hard for most cube tubes to keep up with trays. Even if they get the prestack in autonomous, the most I’ve seen a tube bot hold is 6.

For skills, I agree that long claws can succeed. They are able to take advantage of those prestack and have less variation for autonomous. Their outtaking method is more reliable as well.

Claw>tube. The tube is slow slow on the deployment with having to go over the stack every time you deploy.

i can see that the practice stack is 14 high, which is great but why go a usagi rather than a massive tray and mega compression on a traybot? I recently saw a video of teams in china getting 12 stacks and having to fight over the remaining cubes

Surely, there is a better term that can be used.

tray dr4b is probably better because it’s possible (though uncommon) to put a tray on 4 bar or cascade or other kind of lift.