Starting a new class w/ VEX IQ and EDR - What would you suggest?

More coach’s feedback and discussion on running teams will come your way if you join the VEX World Coaches facebook group. VEX has quite a bit of available
curriculum on their website, and there are some other groups like Robot Mesh and Visual Edge that have curriculum and classroom stuff to look into. I’ve attached a white paper with some CAD information. CAD for VEX Robotics.pdf (80.3 KB)

VEX does not offer programming curriculum, but third parties do.

I work for Robot Mesh, which publishes Robot Mesh Studio, a complete programming environment for VEX robots, from VEX IQ to VEX EDR V5. The same interface can be used for all robots, which makes the teacher’s job simpler. For IQ and EDR Cortex, students can start with Flowol or Blockly and proceed to Python. For EDR V5, we offer Blockly, Python, C++ and JavaScript.

We have people on staff who have been working with VEX robots and STEM teachers since 2006. Please contact us with any questions you might have.

as a student who participated in vex classes/clubs for 7th, 8th, and now 9th grade, I can say that it isn’t really necessary to start 7th and 8th graders with vex IQ, it may be better to go straight to EDR. may also save a bit of money/effort since you only need one system.

Yep. Even elementary schools in my area compete in EDR

When you design your room try to make plans to elevate your field, this will give you much needed storage room.

Not sure what area you are in but it is always good if you can visit some one and see their setup. I am always willing to have other teachers and coaches who are just getting started come visit my classroom and talk with me about things that have worked and things that didn’t. If you are in Socal message me.

I think storage of all the parts was one of the biggest challenges I had in the beginning. I can always send you some pictures of what I have come up so far.

As for curriculum, I use PLTW engineering program and robotics is after school. My high school students spend about 10 hours a week. It is a direct correlation between time spent in robotics and how well they do.

Anyways, welcome to the fold.

may be better to go straight to EDR

Depends on the student population and the support environment they have, in my opinion.
IQ vs. EDR

I can always send you some pictures

@cmaricic, I too would like to see more examples of how work spaces are arranged and parts are stored.

in particular advice on room design

VEX does not offer programming curriculum, but third parties do.

Actually, there are some programming units in VEX’s STEMlabs
https://education.vex.com/eduvex/edr/stem-labs/

Thanks everyone for the replies thus far. Numerous posters have commented on available curriculum.

Back to my original thought… would it generally suffice to make the curriculum materials available and let teams work at their own pace going through these as needed? I know that we need to have some general plans on getting this done by this month and that by that month, but is jumping into the competition at the beginning a good idea?

Thanks for the CAD handout and the suggestion re: FB!

Yes. As long as you have the budget for the competitions ($50 per team per event on average) start as early as possible. I’d give the teams at least a month to build before their first competition, and at least 2 weeks between completions 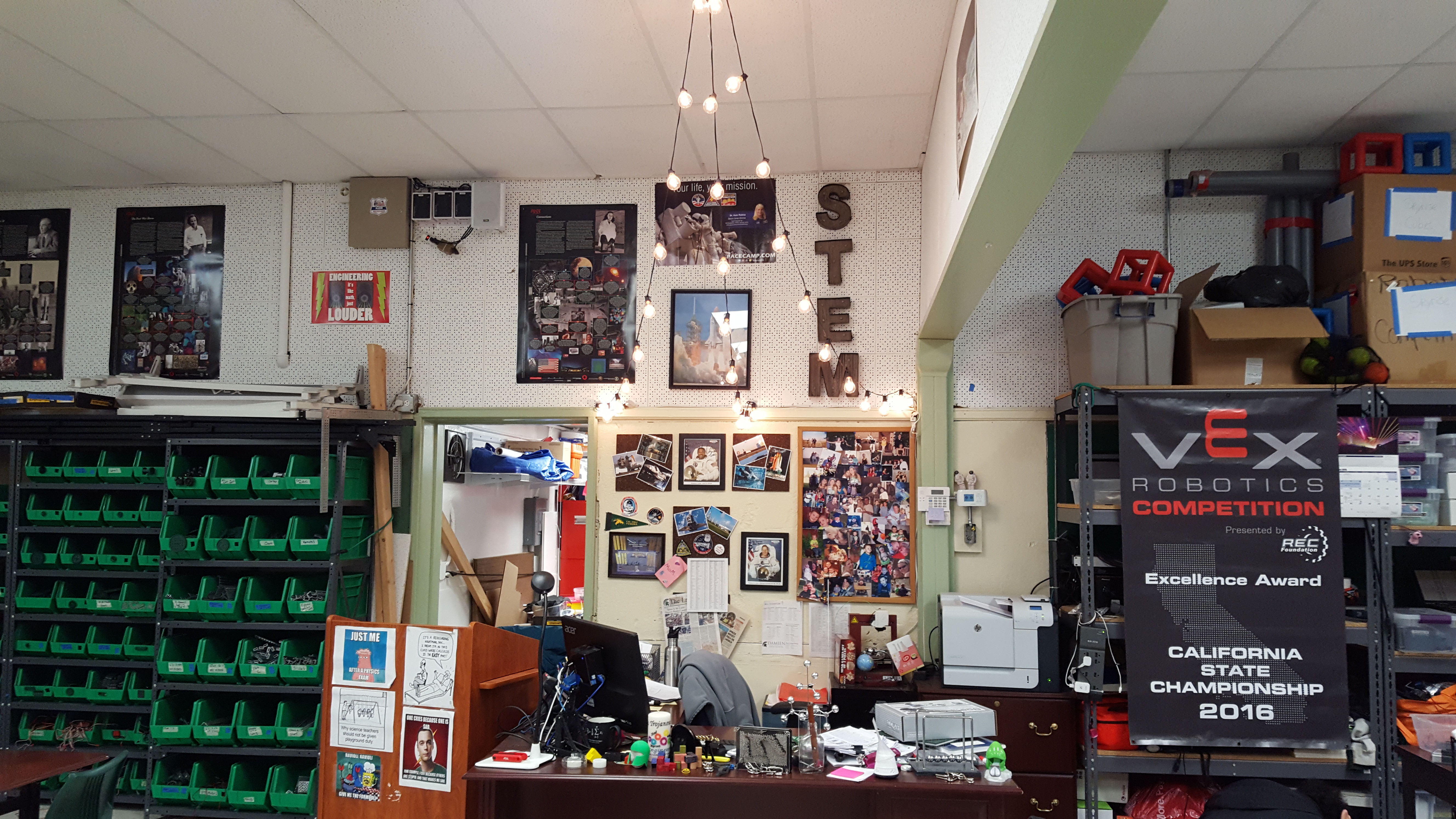 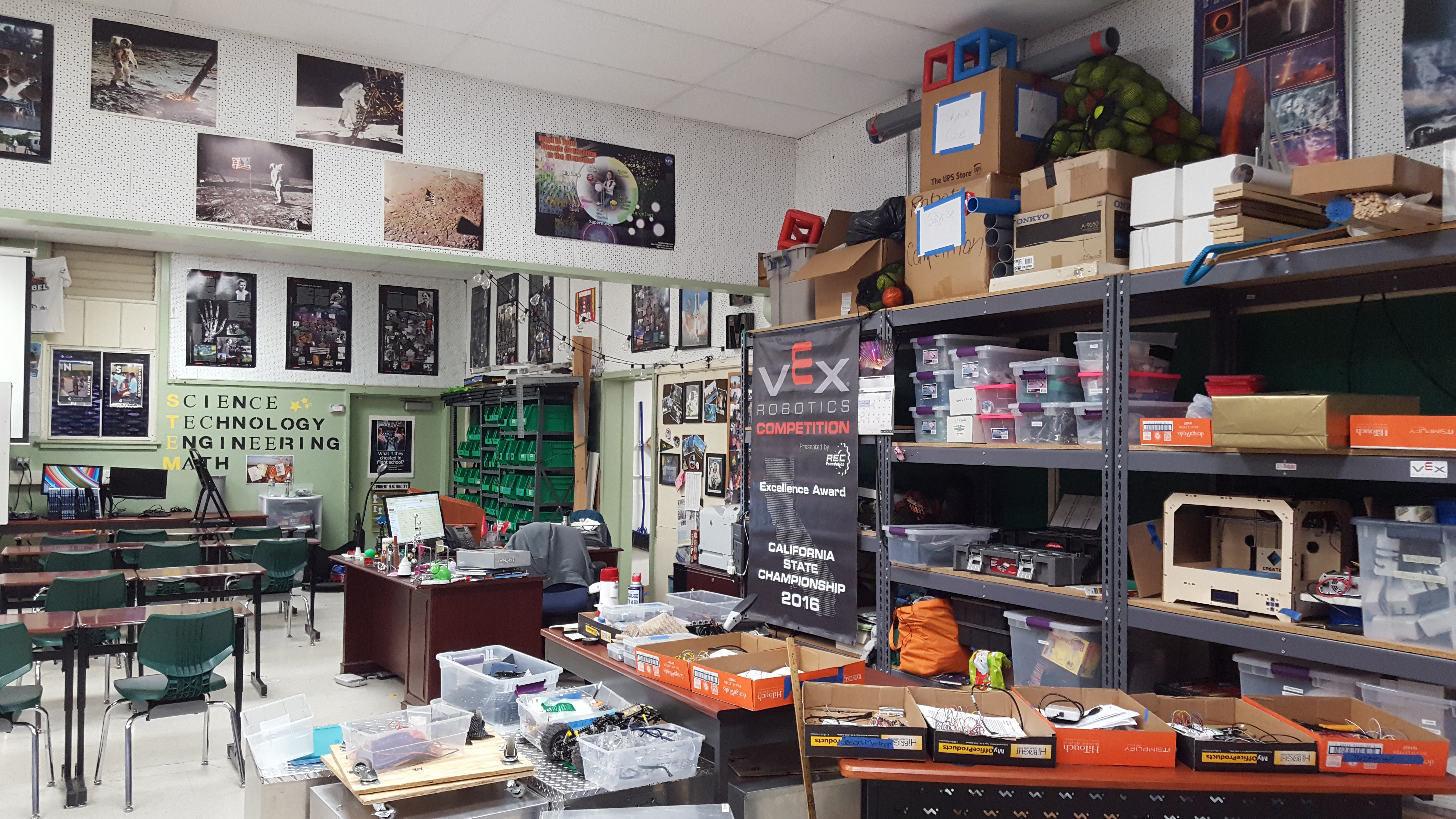 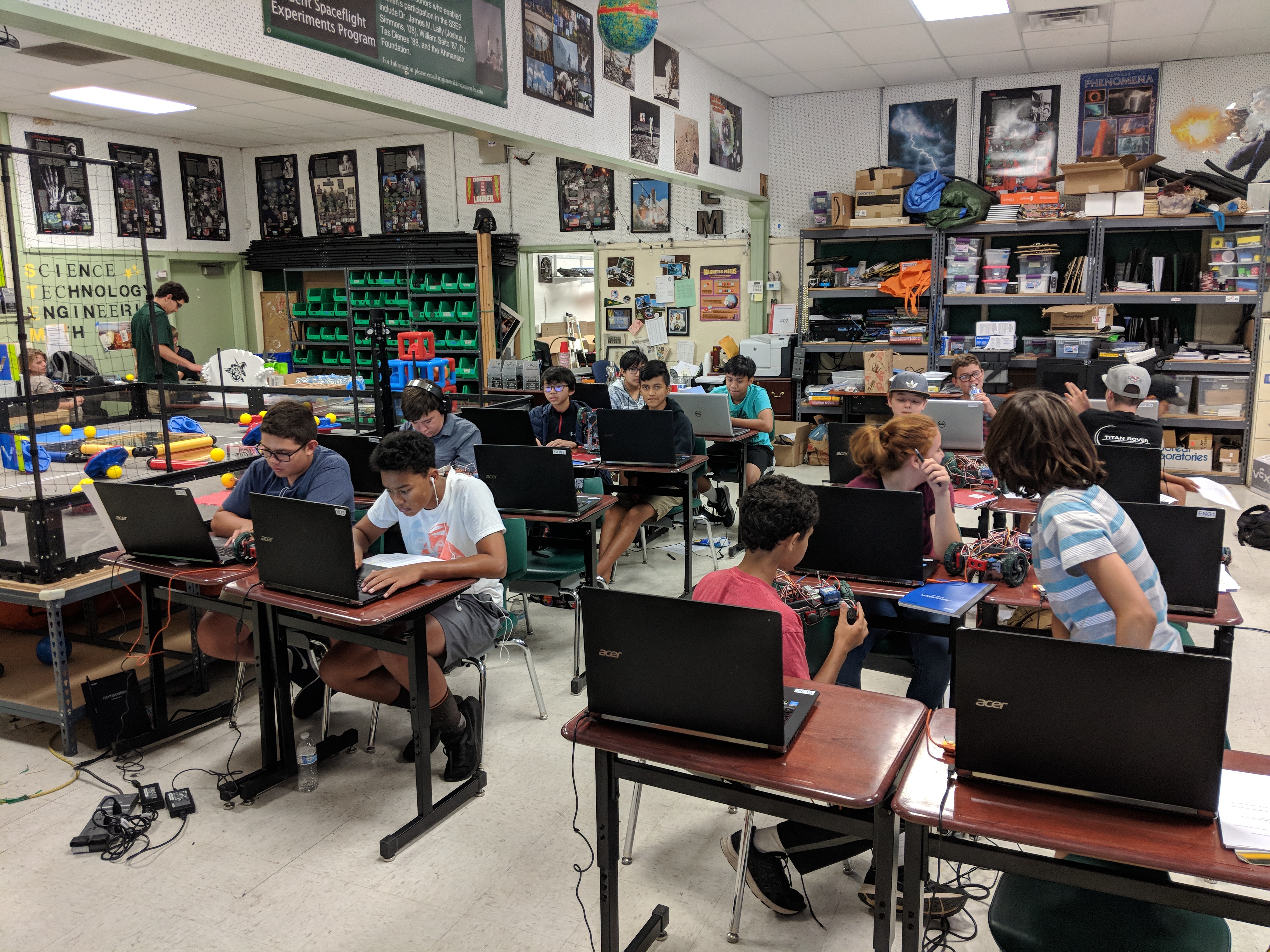 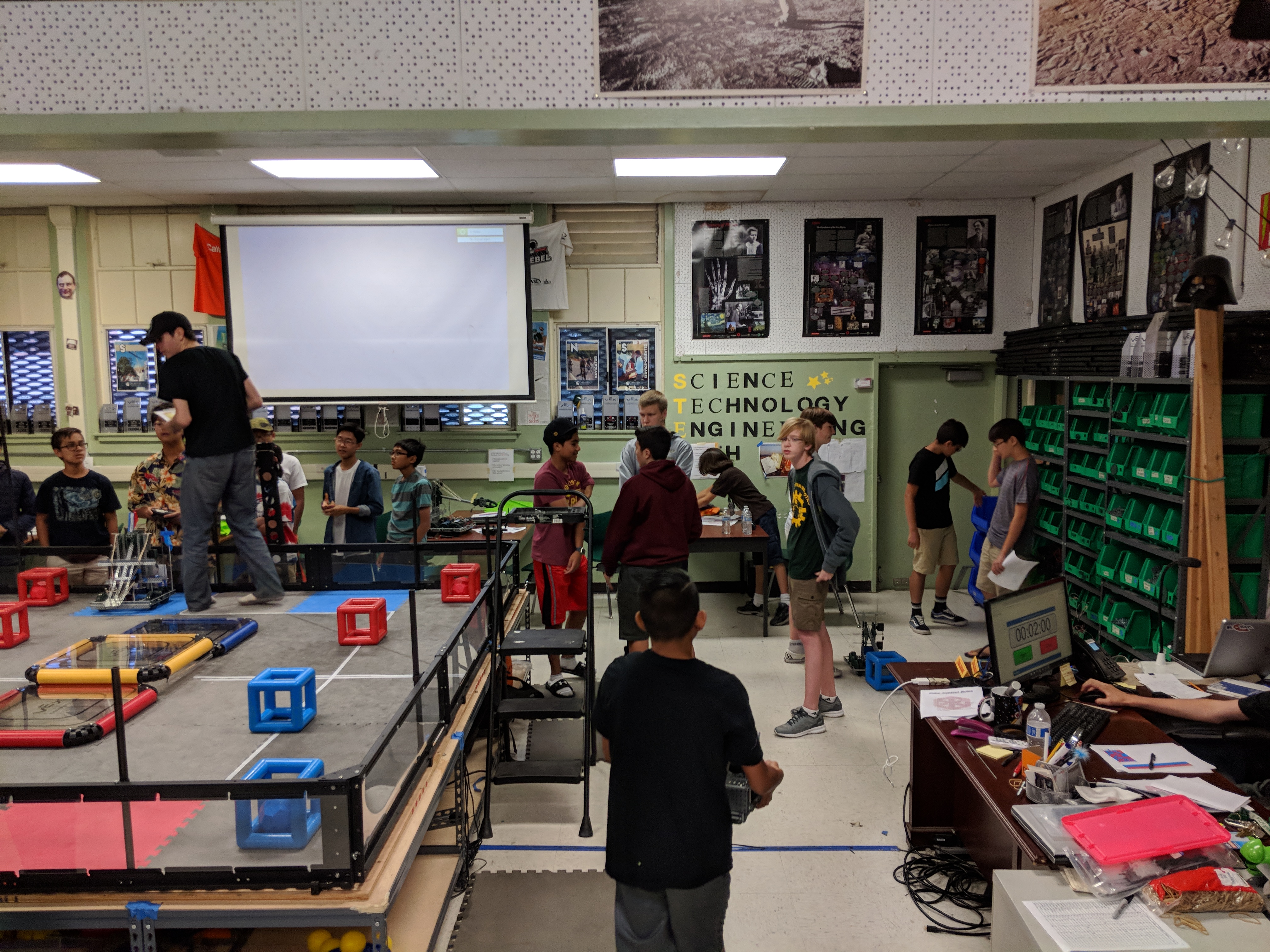 Here are some old pictures I have. You can see we use a bin method for most of the parts. You can get them in all kinds of sizes. I even have some really large ones that are about 2 ft by 2ft that simply stack on top of each other.

You can also see the raised field with storage space under it. We built it from industrial shelving that we chopped up and secured with plywood. I also have a lot of shelving where I use plastic totes.

Another question for you and everyone else as well…

Where do students put their robots when not working on them? Just open shelves or somewhere else? Should there be room for both a robot and a box that the kit came in?Would cubbies be a good idea? If so, how large to accommodate either IQ or EDR?

For EDR, we have 18 x 36 shelving units: each team gets a shelf for their robot and supplies. Most team members have a toolbox of their personal tools. Team tools have their own storage areas.

For IQ, each team has two VEX tubs, organized with 5S foam from www.technology-education-resources.com, and an industrial “grid tote” which is large enough to hold their IQ bots. The three totes together fit onto a shelf for each team.

Great info! Could you post an image of the IQ tubs with the foam?

Also, when you say personal and team tools, what makes up each of those?

Do individual teams provide their own personal tools or are they checked out for the season?

Here’s what the 5S foam set looks like for a superkit. They will be available soon for purchase, and our team (3547:Virus) will have sample kits that you can look at. We’re working on mass-production of the foundation add-on kit too. 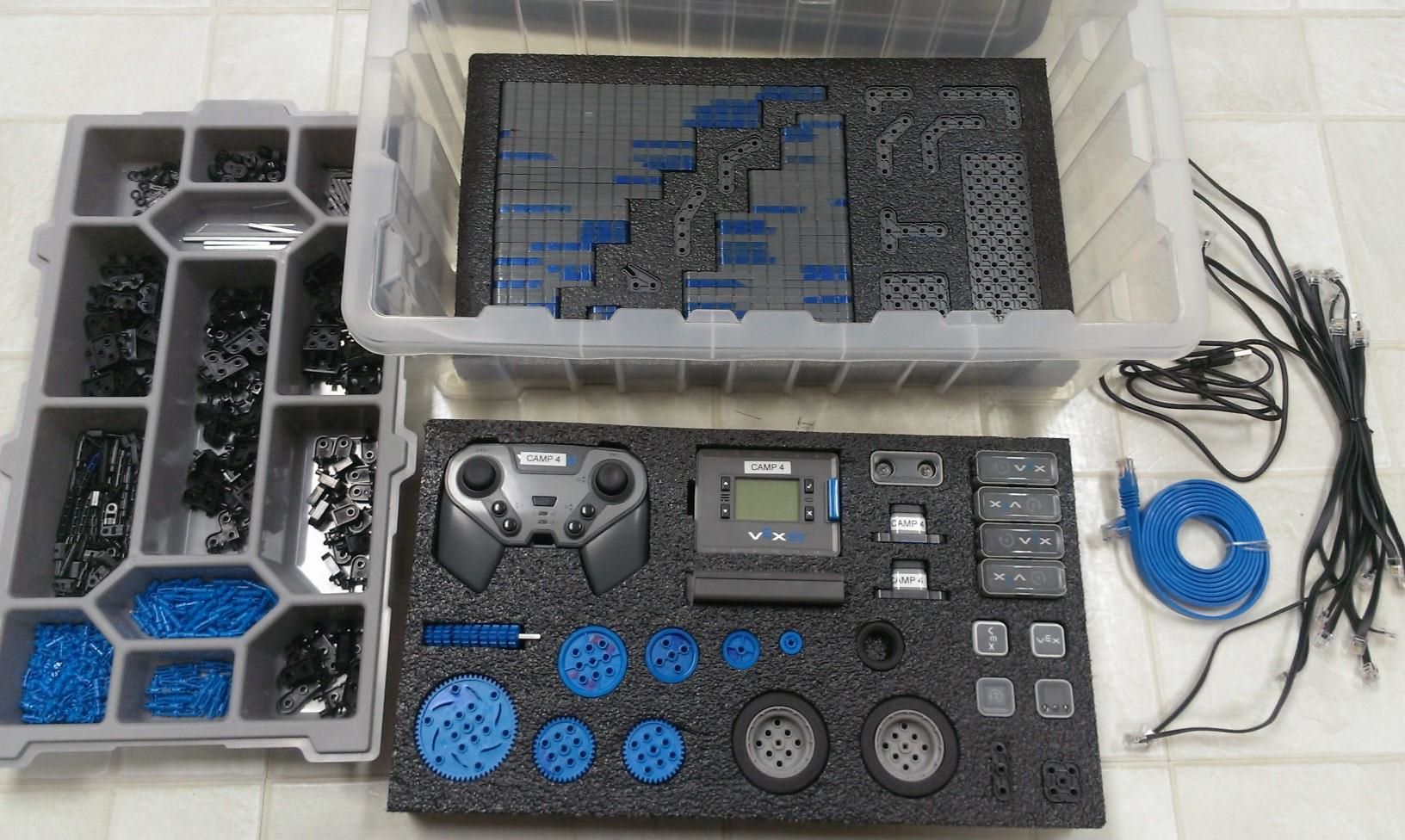 For tools, most teams buy their own personal tools. There are also “team tools” that stay in the lab all the time. Check out www.robosource.net for some nice tool kits for teams and individuals.

Also, when you say personal and team tools, what makes up each of those?

Do individual teams provide their own personal tools or are they checked out for the season?

At my school, we have several large standing cabinets for EDR robots (double door, 36" ish wide by 18" tall), padlocked yellow-bin cabinets, and a single toolbox full of basic tools, like hammers, hacksaws, vices, files, C-clamps, etc. along with power tools elsewhere. Generally, the teams don’t check them out, but do use them during build sessions.
I know that I’ve purchased some tools to use when building, but not many students do that. The ones that do typically leave them in their toolboxes; we have those wide collapsing toolboxes that are given to each team and they can fill them with more boxes of screws, or metal and other various building materials. Our cabinets also house all the organized building parts, with separate boxes for modified parts.
Teams (myself included) have been known to take their robots or parts home to modify them with whatever they have at home. Furthermore, teams get basic tools like allen wrenches, T15 wrenches, normal VEX nut wrenches, pliers, and wire cutters for zipties. Safety glasses are kept in their own bins that we take to competitions so everyone can use them.

Hope that helps answer your questions

Thanks for the info!

What a great idea. Thanks for sharing!

This might be of some help, as I took an NXT and VEX based class in high school which was at least partially designed for helping students who planned to join the robotics team. I even helped run the class for a semester after I took it.

For the first semester, the class was primarily done with NXT. In general, the format of the class was various challenges which students would be given a week or two to complete. The first few challenges for NXT were primarily to give students a chance to figure out the system, and from there got more complex. One in particular that I remember was one which was essentially an obstacle course, which required the robot to move a ball, navigate through a tight path blocked by a pile of tires, go up a slope, and then put that ball in a hole just a bit bigger than itself. The semester ended with a Vex-Style tournament, with a game that was essentially a larger version of the game operation, where the robot had to pick various robot body parts out of a hole and score them on platforms.
The second semester was primarily based on VEX cortex, with the primary programming software being used being easy-C. Once again, there were a few challenges at the beginning to figure out the system, and after that, students were asked to submit their own challenges, which would be used up until the final project for that semester. Unfortunately, I don’t remember a large number of those challenges. The class culminated with recreating the old VEX game, Round Up, for the last few weeks. In my opinion, having students play old vex games is a good idea (if you have the space) as there are sources of inspiration online, game pieces from old games can be gotten from older teams pretty cheaply, and the games are pre-made. Also, the tournament manager software is good for running class competitions too (once you figure out how to use it). We were lucky in that we had had a vex team for quite a few years prior to when i took the class, so we had many games to choose from. Turning Point parts should be available soon from local teams for pretty cheap, so if you would like to use them, it is time to bite.

As far as the team went, each one had a small cabinet to keep a few tools, prototypes and parts, and there was a large tool chest to get tools from. Also, the room was large enough for the robots to be put in the rooms huge closet or attic.

Sounds like a pretty cool progression! I am concerned that students signing up for the HS class may not have prior robotics experience. They can learn as they go but it’s not ideal. I can try to match those students up with other team members that do have experience, but then I have to get involved in picking teams and I’d rather let students select their own team members.