Thought we had dead ports from ESD... Prong were just bent

Over the past few years I’ve had numerous teams tell me that a port on the brain had died. I had read so much about ESD damage that I always assumed it was the cause and would tell them to mark it as dead and reprogram for another port.

Well I finally got around to checking our spare brains for dead ports that were never marked. I found some unmarked dead ports and quite a few with loose connection. The loose connections were being caused by the metal prongs inside of the brain’s RJ11 ports being permanently deformed and only making intermittent contact with the connections on the end of the motor wire. I modified a small screwdriver so that it resembled a tiny lock pick and started bending them back into their original shape.

All the loose connections have been fixed (at least for now).

I took a look at some of the dead ports and noticed that many of them also bad prongs that no longer had much “spring” left in them. It turns out that simply bending these prongs back in the same way brought some of the ports back from the dead. The prongs were so deformed (they basically laid flat) that they were not making any contact with the terminals on the wire’s RJ11 plug.

While we still have some dead ports (probably from ESD) it turns out we have a lot less ESD damage than we thought.

I thought I’d post about this because while I may have missed it, I could not find any reference to this on the forums. If you have dead or intermittent port connections, it’s worth checking the prongs inside the ports.

So, carefully bending the prongs repaired 4 of the 6 ports.

Note: If you try this… be careful and use a light touch with a very fine tool… obviously with power disconnected.

Thanks for posting this possible solution to brain ports dyeing. My only concern is that brains are electronic component, so by bending the ports back in place could make the brains illegal for competition use.

Rather than building your own, sets like these are pretty handy. I have one from the dollar store that works. https://smile.amazon.com/Stainless-Remover-Cleaning-Hygiene-Personal/dp/B09WCYDDLS/

@evasnphysics you want to makes sure you have the $80 repair receipt in your spares box so when @seanseal inspects the robot they don’t worry about illegal repairs.

Do you have any picture comparing the 2 brain states. Something like that could be useful as a quick reference.

I think this is the point where G3 comes into play. If the pins were bent inward, would they not be just as “modified” as bending them outwards? One could even argue that bending them back to their original shape is in fact “un-modifying” the pins. Also, scratches on the brain’s casing would also technically be “modifications”.

At some point, we need to accept that this isn’t going to give anyone an advantage over a team with a brand new brain, and invoke G3 to let it pass. Don’t need even more ewaste than is necessary…

@evasnphysics Thank you for posting this, I’ll point some teams in my state towards this thread, maybe they can make a brain or 2 usable again.

P.S. To any VEX leadership reading this,
This thread is a key example of why the VEX Forum needs to exist as a freely available public forum.

No pics yet. I’ll try to take close ups of the ports when I find more with clear issues.

Sometimes I’ve been able to tell that the prongs are too flat with just a visual inspection, but other times I couldn’t. I’ve visually looked over a row of 10 ports to compare them and they’ve all looked the same. But upon testing some wouldn’t work until I bent the prongs back up. It seems like a very fine difference is important. I have been taking a good motor and wire and just cycling through the ports to ensure a red LED on the motor. If if doesn’t light up, I wiggle it up and down to see if the connection is intermittent. Still no LED… Disconnect the battery and adjust the prongs. So far this has fixed most ports with a dead or loose connection.

(Note… I’m getting a bit older and can’t work on these without my reading glasses or magnifying lamp, so inspection results may differ…)

As for the ports where the prongs clearly looked too flat… A few times in past years, when we had a loose connection, a couple of the kids would “fix” it by wedging a zip tie into the top of the port to force the connection together. I’d wager that these might be the ports with the flatter prongs.

A word of warning though… You may just damage the prongs. I tried to fix one today when I was in my classroom using a cruder tool (the other one was in the robotics room) and accidentally bent a pint too far and fractured it. Port is now truly dead. But then again, it was useless before.

@seenSeal may have a technically valid point, but these pieces are designed to bend, I’m just helping them back to original condition.

I thought I was a pretty picky inspector, but I’d never flag this… I do wish I had one of the RMA receipts from back when they were just $60, though.

Bell used to make a device that you could plug in and it would work the pins, all off the home installers had one, my butt set has one on the hook that does the receiver after the thousand of hours of conversations happen across twisted coils of wire.

In the PIC days we would replace the ends.

We make new cables today for IQ and V5 and we are going to ding teams on a paperclip inside a VIQ or V5 brain.

I would agree that G3 would apply here and that I would(and will) accept this fix as a reasonable adjustment to the brain. I was mearly calling attention to that rule as more of a “don’t forget about this rule and change other things”. If i get the time (as a student and not a coach) I might even try out this fix.

I can not confirm or deny in a much simpler time of 3 wire connectors on Cotex pulling broken wire out of sockets, bending wires to the right format or even replacing broken DuPont style connectors with new one.

The war was on you see and with the daily bombings and the noise and the blackouts we were forced, no we became more creative how we used the minimal rations that we had. We could take the biscuit tin and eat the vitally important food, but then reuse aluminium bits for radio parts, the tins to store supplies in and soon we had a storehouse that we were able to create all sorts of things to fight the war.

Why on earth did you ping me for that?

Because I often go into “old codger mode” and you ask why. Somtimes we olds dig into our history and go, “Hey I made this back when I had a AC Gilbert Erector Set” wonder if it would work again, and here we are.

Can’t have you being the only person exacting social change by standing up for people’s rights. Lots of us are looking for change too, we just use different words to get there.

tough to get a detailed photo, but here is what I got this morning.

The port on the left was dead. (It would connect if you put a decent amount of pressure on the plug to press it into the prongs, but it was essentially dead.) You can see that the prongs are bent into a shallower angle and don’t reach as high as the port beside it on the right.

The differences has not always been this clear. 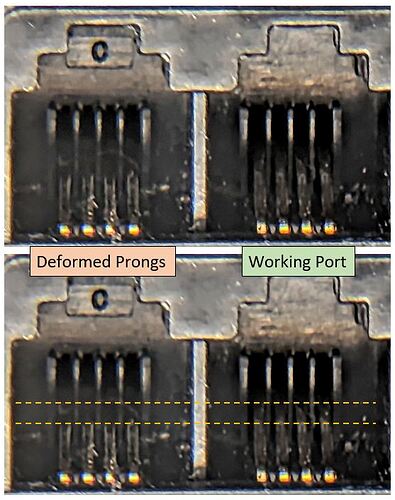 I can’t overstate how useful this image is. Thank you so much for posting it. @levipope any chance we could get a similar image and an official KB article about port pins and how to fix them? This is an issue that affects a lot of teams and especially in the current climate where brains and motors are hard to come by this information could probably help revive quite a few brains.

@sazrocks
We will most definitely get something put together.

I have seen this before and the going theory is that a lot of this damage happens when you build custom cables and don’t fully crimp the connector. (again just a theory it could be caused by other things as well). I have seen ports with the prongs bent completely flat and bending them back will get the port working again. Making sure your cables are all crimped well will keep those ports from deforming in the future.

This issue is briefly mentioned in this VEX Library article (https://kb.vex.com/hc/en-us/articles/360036143012-Using-the-V5-Crimping-Tool-to-Make-Custom-Length-V5-Smart-Cables-)

@evasnphysics is absolutely correct in that this is a delicate procedure. You can easily permanently damage the port if you are not careful. We will get some best practice documentation put together and share that when it’s ready.

Brain had 10 fully “dead” ports and 3 with loose connections. (on a competition robot with 8 motors and a radio)

Now all ports connect, but 2 do have communication issues (flash red)

With a casual inspection, all cables seemed to be fully crimped. With a little magnification, two ends might not have been completely crimped. When recrimping, you could feel some resistance at the end to the crimper squeeze (they were not 100% crimped).

We can’t say that the cable end was causing the problem, but it would explain the large number of bad ports as they switched to new ports as one would be damaged during the season.