Torx vs Hex and Other Screwheads (poll)

So over my many years of Vex, I’ve come across many screw heads and one thing one sure I can say is that some are definitely better than each other. So there’s the basic hex it gets the job done, it does it… well enough. Then I bumped into flat and phillips head when I went to lowes to get some long screws and other on-demand length screws. Phillips is pretty good especially for long screws which strip very easily, it powers through screwing a lock-nut ALL the way down 2 inches or so of the screw where a hex screw strips halfway through. flat is NOT great for regular use since its hard to align etc but the screws I was using were these funky flat-head-phillps-combo screws which was basically a philips head but one of the two slits went across entire screw so you could stick a flat in it. Flat is super good at taking out the strips long screws when ever they did strip. I could’ve switch to these combo screws but the heads are bigger than hex and other small things that i’ve forgotten about, but basically these combo screws are only good for seldom use.

Until I bumped into Torx. Safe to say my first experience with torx wasn’t great. Wow why would they use these weird screws instead of hex. i cant even stick my hex key in it. it stripped, wow. why are they selling these along with the hex thats confusing. i hate star drive. only until a few months ago, a torx screwdriver miraculously came into my possession. I literally don’t even know how i got it, it just showed up in our toolbox. ok, this is mine now i guess

then the mid-season screw famine hit and the only screws left were lousy screws from our tp field. The first torx screw i ever tightened with a proper tool I instantly loved them. The way how the screw driver grips the screw is so firm feels like it isn’t going to strip and the way you over tighten them so much without stripping. I haven’t had a single torx screw strip yet and I can trust using them with power tools.

The 7701 coach is hesitant on switching to buying torx because all the teams would have to get more tools and organization with the thousands of hex screws we already have etc etc.

but I’m curious to what the consensus on what screw heads people use because torx is kinda like a hidden gem i think that more people should use or if i’m just in the dark and the majority of people have been use torx for years.

Hex is alright. Phillips is an abomination that is literally designed to strip. Flat is not as bad as phillips, but it doesnt self-center. Torx is shaped correctly to not strip, since the force is actually normal to the surfaces the screwdriver pushes, and there is more material in place stopping it from stripping. This is why I’ve been trying for a while to get my teammates to switch to torx, but they dont want to.

We made the switch this year to torx, they are worth it for sure. So much better not to have screws and especially tools strip on you. Also you can just tighten your screws so much more with torx, there really is no contest imo.

Lol, we also had one.

I use a mix of hex and torx. I find it more difficult to get the driver into a torx screw than a hex screw. There also isnt the ball tip option, so you cant screw them in at an angle.
But they do strip way less than hex screws, which is why if you have to choose, go torx. But for convenience, torx and hex are a good combo to use. Just use torx for high torque applications for when you really need to tighten something. (Ex. Chassis, flywheels)

Robosource actually sells a pretty good torx ball head. I find it inconvenient to use two different types of screws. I can definitely attest that, during the mid-season pretty much the only teams that have screws are seniors who’ve been hoarding for 4 years

Torx is really nice to use. You can get a lot tighter without stripping, among other things, such as robosource’s cool coloured screws collection. As soon as we tried torx, we stuck with it

Torx without a doubt would have to be the best as you can use star drill bits to get overtightened screws out. In my opinion they also strip way less.

Our club has always used hex so we are unlikely to switch any time soon.
Although torx is harder to strip, hex is alright if the driver is not blunt and the screw is in good condition, so throw away screws that are semi-stripped, and use a grinding wheel to keep your Allen keys sharp if they go blunt (this is something you cant do with torx)
Also, I highly recommend that you buy a set of quality Allen keys as the Vex ones are very soft and wear out quite quickly.

I fell in love with torx instantly, just because of the sheer amount of torque I can get out of the screws with absolutely no stripping. I haven’t stripped a single item, be it screw or driver. On top of that, the bit for torx can be found in many stores and is comparable with socket wrenches, ratchets, and electric drills (I don’t use a drill, though).
This means that, paired with locking pliers, a vice, a socket wrench and a hacksaw, I always have the tool I need, regardless of the situation. (Tinsnips help too

Just my suggestion for a failsafe tool setup.

Our team is transitioning to Torx screws using the following system:

Here’s how our hardware system works: Each individual team is issued a small steel drawer-box (https://www.zoro.com/durham-mfg-small-compartment-box-24-opening-202-95/i/G0774778/) to use for sorting their small parts however they please. Team stores are kept neatly in large steel drawer-boxes (https://www.zoro.com/durham-mfg-drawer-12-compartments-red-115-17-s1158/i/G1446173/). Both of these box systems have sliding drawer racks. INDIVIDUAL TEAMS NEVER RETURN FASTENERS to the Team Stores; therefore the team stores are always sorted properly by size, since only new stock is put into the drawers. Until someone builds an automatic screw sorting machine, no screws are ever returned to the Team Stores.

Regardless of the screw head, the type of tool you use will determine largely if a screw head will strip. I found these drivers to do a really good job at tightening hex screws, and in the broader robotics community these are largely used. They’re called MIP Screwdrivers (though they are a bit pricey, they are definitely worth the investment). They also sell them individually. Buy here. 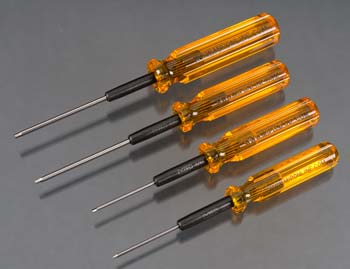 These have been the most reliable drivers I’ve ever had. They easily remove any “stripped” screw, and prevent screws from stripping as well because the bits are cut really sharp and are made of really strong metal.

i have some of those, though significantly better, in my opinion is that the upgrade is kinda a 4/10 to a 7/10. while on the other hand torx is 10/10 screwing experience

I agree with you, torx is overall the better option