What is your def of passive. Any concept/examples yourself?
DR4B Extending Reverse Stacker (V2) for one, I mean passive-ish…
Or semi-passive like 3085 in https://www.youtube.com/watch?v=bkEcHY5bUSE ?

I’m probably not the best person with passives but I’ve put some thought in them this year, my first model was a pivot gusset or 45 degree gusset that would slide up when picking up a cube and then lock into the top indent of the cube.

I have a passive design in the works. Depending on if it works, you’ll see it eventually.

Since @Codec and @Deicer have already outlined the passive intake concept, I might just a well share a picture, because this concept have been frequently talked about on Discord in the recent days. 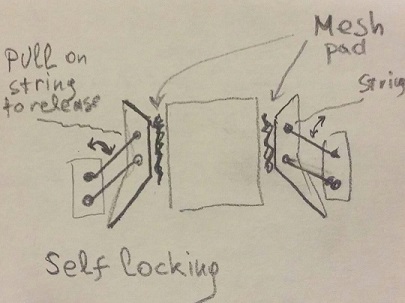 The main idea is to have a self locking geometry where the weight of the stack is used to generate the force for pushing on the cube from the sides and lock it in place. You intake new cubes by lowering the stack on a next cube and then just lift it up with the new cube.

It is possible to make it fully passive by lowering the lift all the way until the side-jaws touch the ground and then drive the robot back, but that introduces a bunch of inconvenient limitations.

Better way is to make it passive intake / active outtake by, let say, pulling on the strings to release the stack.

Better way is to make it passive intake / active outtake by, let say, pulling on the strings to release the stack.

Seems like it might be possible for this concept to use the 1" high goal edge trigger the passive release of a stack.

Im currently leaning towards how robots in FRC recycle rush, where it was just a set of small wheels that sucked it in.