Tray Bot concept for rise above

I know that their is already a topic for robot ideas but I feel that this needs its own topic. Right now I am working on a tray bot for rise above and am wondering if anybody thinks that this is a viable robot. The thing that is stumping me right now is the intake because you have to flip the riser onto the tray then you have to move the riser out of the way for a new riser to flip onto the tray. The robot will be like a TT simple tray with no moving arms. I do not have my tilter on yet but it will be like a TT tilter. 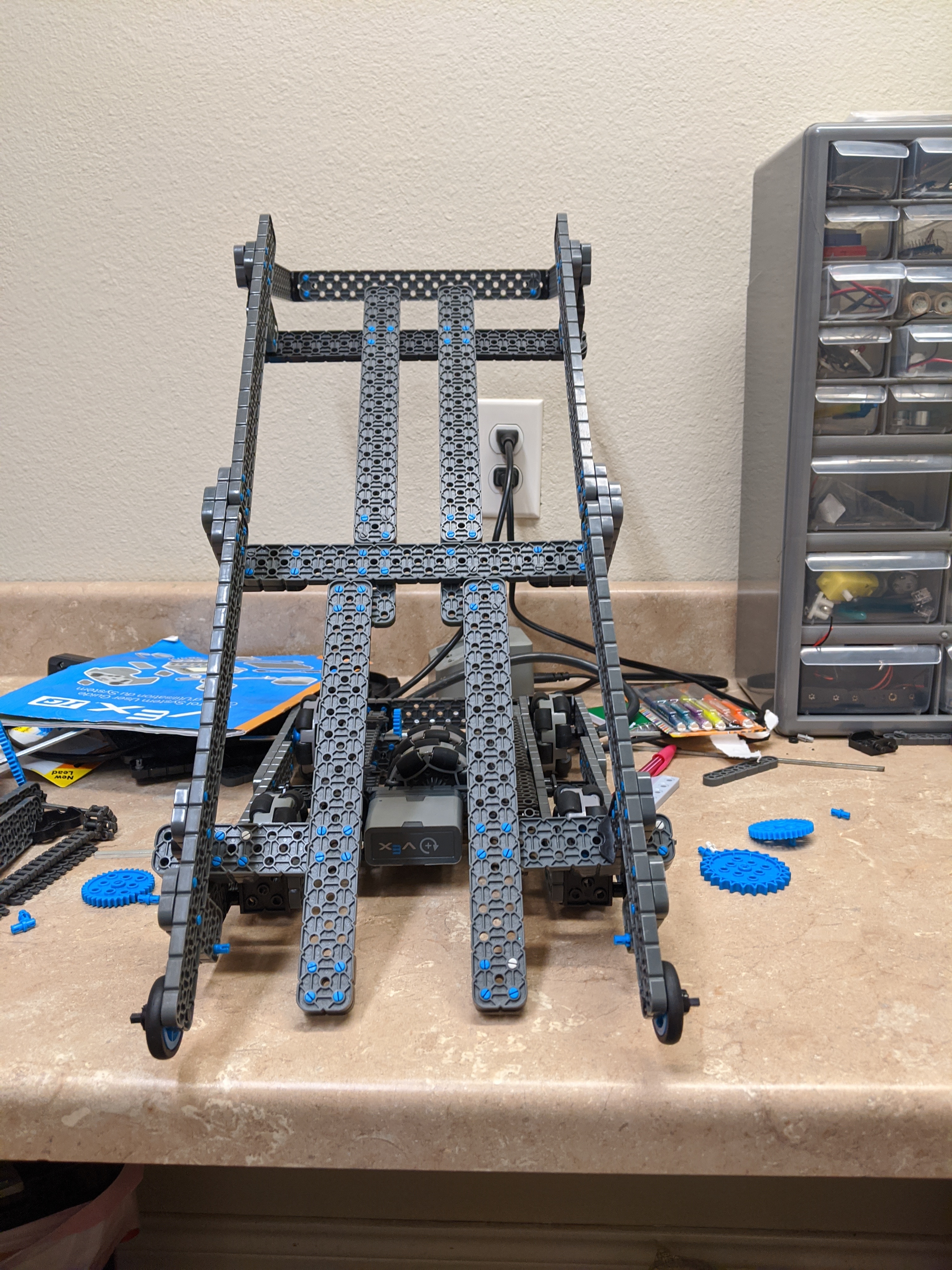 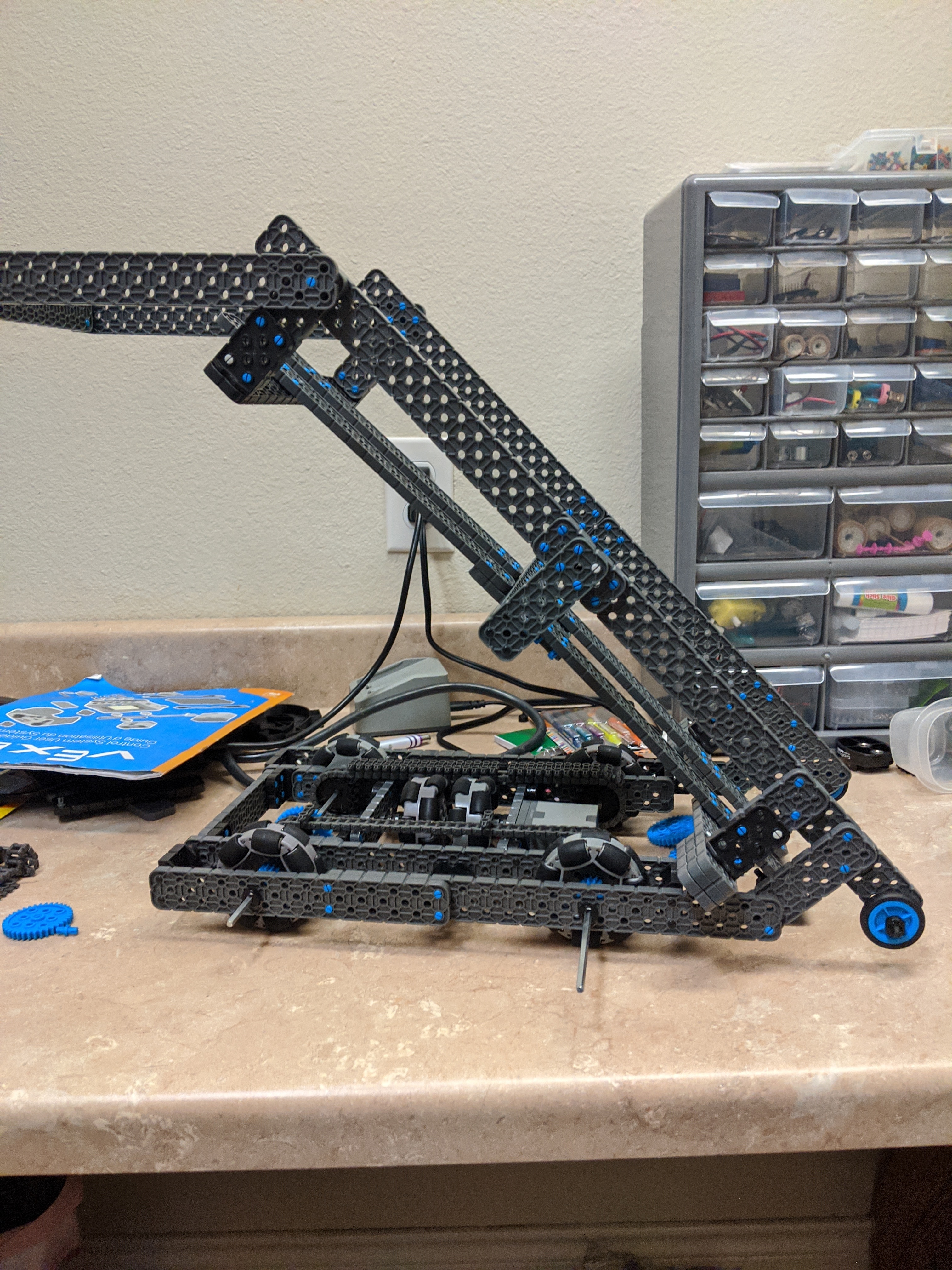 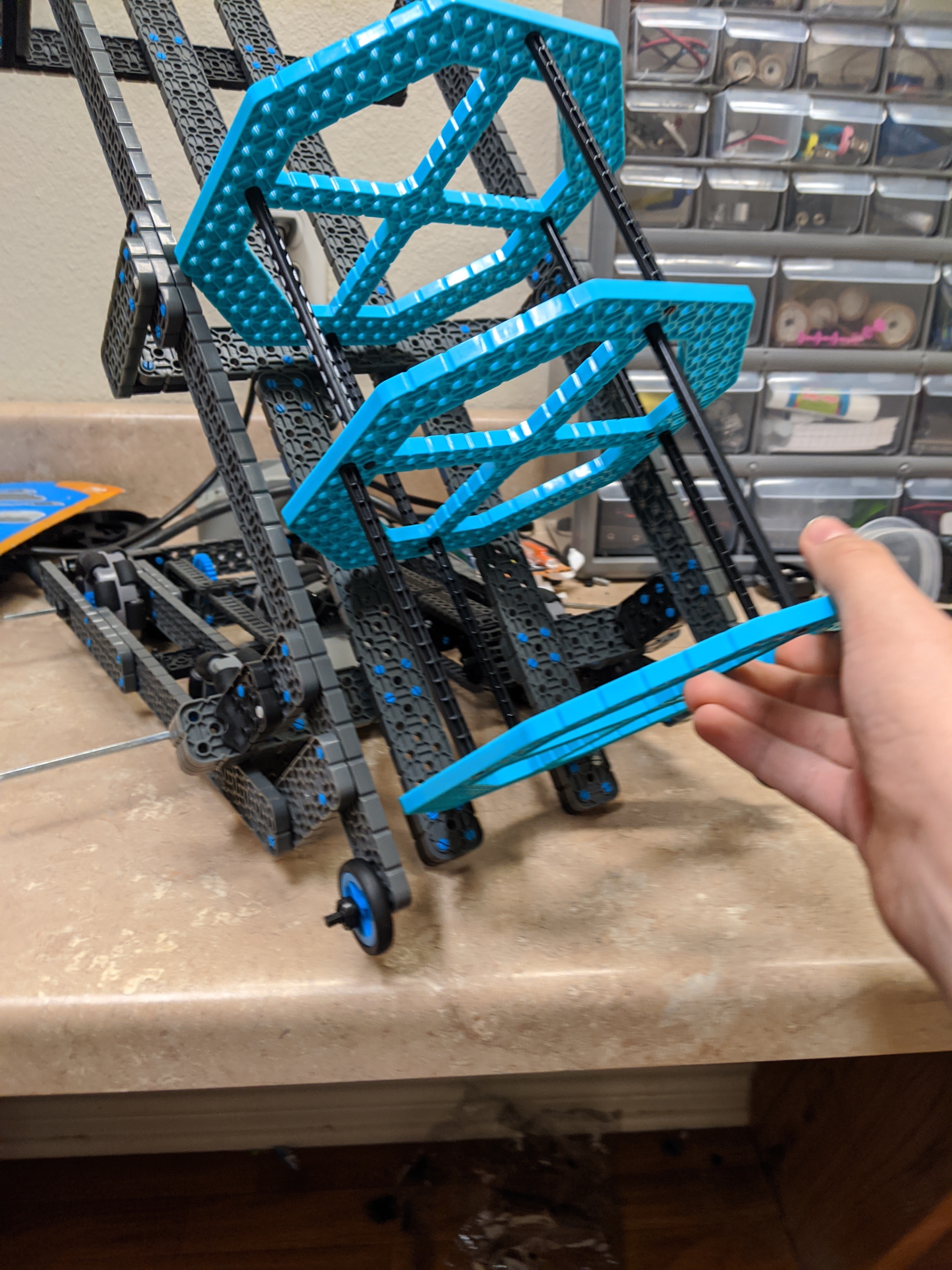 Dang. I would really like to see how that intake would work. Are the risers going to just fall out the back? Or is there going to be a tilter like TT robots?

I think there is gonna be a tilter

It is going to be a tilter

The part that is dangling off is the second stage that I’m building. The intake is going to be the hardest part of this robot because you have to tilt the riser into the tray and still move up the tray.

L u c k y! I am in VRC and all I have to prototype with is a small vex IQ kit and some stuff lying around the house

Honestly I think making it vertical would be better. I don’t think the risers are as unstable as the cubes from TT.

I have been thinking about that too because that would get rid of the hardest part that I have been building but now the problem would be getting rid of the stack.

Have the intakes contact the upper half of the risers, which will tip them backwards and into the tray

How tall is your robot design?

Have you tried doing something with tank treads? Like put 2 standoffs of some length and a 2 by 3 plate all along the length of some tank tread. I am sure it would be easy to figure out a way for the tread to bend with like two linear lifts connecting to the motor. If that doesn’t work you could try some sort of intake like from T T then have one motor at the top of your tray running two extended long axels with some sort of hook at each level where the riser is stored. Then if you could get the intake to work you could have those extra long axels hold all the risers in place the release them when you were finished. Sorry for the really long and boring comment. Good luck!

I have to be honest here. I can wait to see this when its finished.

I was talking to somebody recently about this design. Yes, it certainly is possible but I don’t really think it would be able to stand up to the inevitable variables in a team match that might require you to stack a riser your teammate missed or something. Great potential but just not adaptable/flexible enough would be my take on it.

How does the robot look now?

I’ve tried this concept (mine flipped upright). Trust me, it’s not worth it. The intake doesn’t work, the chain will always sag under the riser’s weight. Plus, just picking up the risers almost never works either because the intake just isn’t strong enough. And if you’re looking to score more points I don’t think the tray bot will be fast enough to do that. There are already metas on YouTube that work better.

This topic is pretty old but I have some ideas. I think that in it’s best state, a tray bot would be the meta for rise above. If someone built it perfectly, I think it would be very fast and effective.
Here are some ideas:
A flat base with the tray at a 45 degree angle on the robot when at rest.
On the inner back plate of the tray, there are tank treads with 2 pitch standoffs on them, it would be sort of like a reverse ball intake from squared away.
Then, at the top of the tray, there should be an extendable part (about the size of the third riser) that you would extend at the beginning of the match.
So, the tray intakes the risers at a 45 degree angle and then it would speedily drive to a goal, and tilt the tray up to a 90 degree angle, while simultaneously running the intake at reverse.
In conclusion, that would use all six motors, and would be more effective than any other design (provided the operators have designed an effective program and can drive well).

I also think that it would be a pretty effective design, but I have a few concerns.

On the inner back plate of the tray, there are tank treads with 2 pitch standoffs on them

Now, it’s really not all bad though. I really think that this could be a competitive design, with a couple of differences.

For example: Perhaps the tilting time could be eliminated by not having it be at a 45 degree angle. Instead just flip out straight up and keep it that way the whole match.

I definetely don’t think that this is the best design, (I don’t think that it’s been discovered yet, but I could be wrong), or even in the top couple of robot designs, but it still seems like a really cool robot to try out! The judges love to see creative robot ideas, just don’t assume it will be the best robot.

TL;DR
In my opinion, tray bots are cool, but not the greatest robot.

Flipouts are never not annoying to deal with