With the combined knowledge of everyone on vexforum, I’m sure we can figured out the best tray designs.

The part of the tilter that holds cubes. Commonly made of multiple unfolding and/or extending sections.

Trays come in many different designs, including plastic(like polycarbonate/lexan), angle-channels, extending sections, etc. I would like to know everyone’s opinion and experience with trays. What works best, what doesn’t, types of trays that are most reliable, lightest, simplest, etc.

Here are some topics to maybe discuss…

I want to hear your opinion and testing done with this so that we all can hopefully learn something.

But still a nice thread

Oops. I meant stuff like polycarbonate/lexan or other allowed plastic.

I think that as far as the tray design goes, there is no clear superior. I’ve seen all types of trays perform well against each other.

I think the C-Channel tray stages are better for doing a telescopic tray, but the angled bar trays are much better generally for everything else. It’s easier to mount lexan or zip-ties to them and the base of the bars supports the lexan and zip-ties well to allow for the cubes to go over.

Although, I don’t even know if you can do a telescopic tray with angle bars, unless you heavily modify it?

C-Channel tray stages are better for doing a telescopic tray, but the angled bar trays are much better generally for everything else.

Yes and no. C channel is much more versatile as you can mount stuff to it without interfering with the cubes but it takes up a larger footprint and weighs more. Though weight shouldn’t be an issue, it’s still something to consider. You also get a stronger tray with c-channel because the flanges add a lot of strength.

Should you use plastic ?

Yes. Use as much polycarbonate as possible. Use it for side rails, or tray backing. This helps tremendously while not adding a lot of weight. Especially for telescoping trays, you want 0 to no friction on the third stage so that your intakes aren’t doing considerable work just to push the thing up.

Should the center of sections have something or does empty work?

Like I said before, lexan is the best option. Empty works but not well. Cubes fall out and misalign, and the tray is less rigid.

Should the first/bottom section be different?

Doesn’t really matter. This is variable per robot but symmetry is always important. Just make sure the two stages align to form a straight, parallel line. The banding for a flip out is important especially with weight. You want to be able to easily flip out while not shifting the robot from the drastic change in momentum.

Zip ties across the center center of sections or in other places.

According to china, it works quite well. I use lexan for my third (telescopic) and second stage and that has worked well for me.

Tips/ideas on handling folding of sections .

The less fold outs, the better. There is such thing as too much banding and banding fatigues over time so always replace bands, don’t just keep adding more which will end up being inconsistent with time. If you have a telescopic tray, you also better preserve the angular motion of your robot better because (for the most part) most of the mass will be towards the center of the robot instead of extending really far out. It makes turns more consistent and maneuvering the field easier. I really like pigpen’s design. 3 stage flipout with 4 stage telescopic. A really good balance of everything basically.

Although, I don’t even know if you can do a telescopic tray with angle bars, unless you heavily modify it?

You definitely can do a telescopic tray with angle bars. 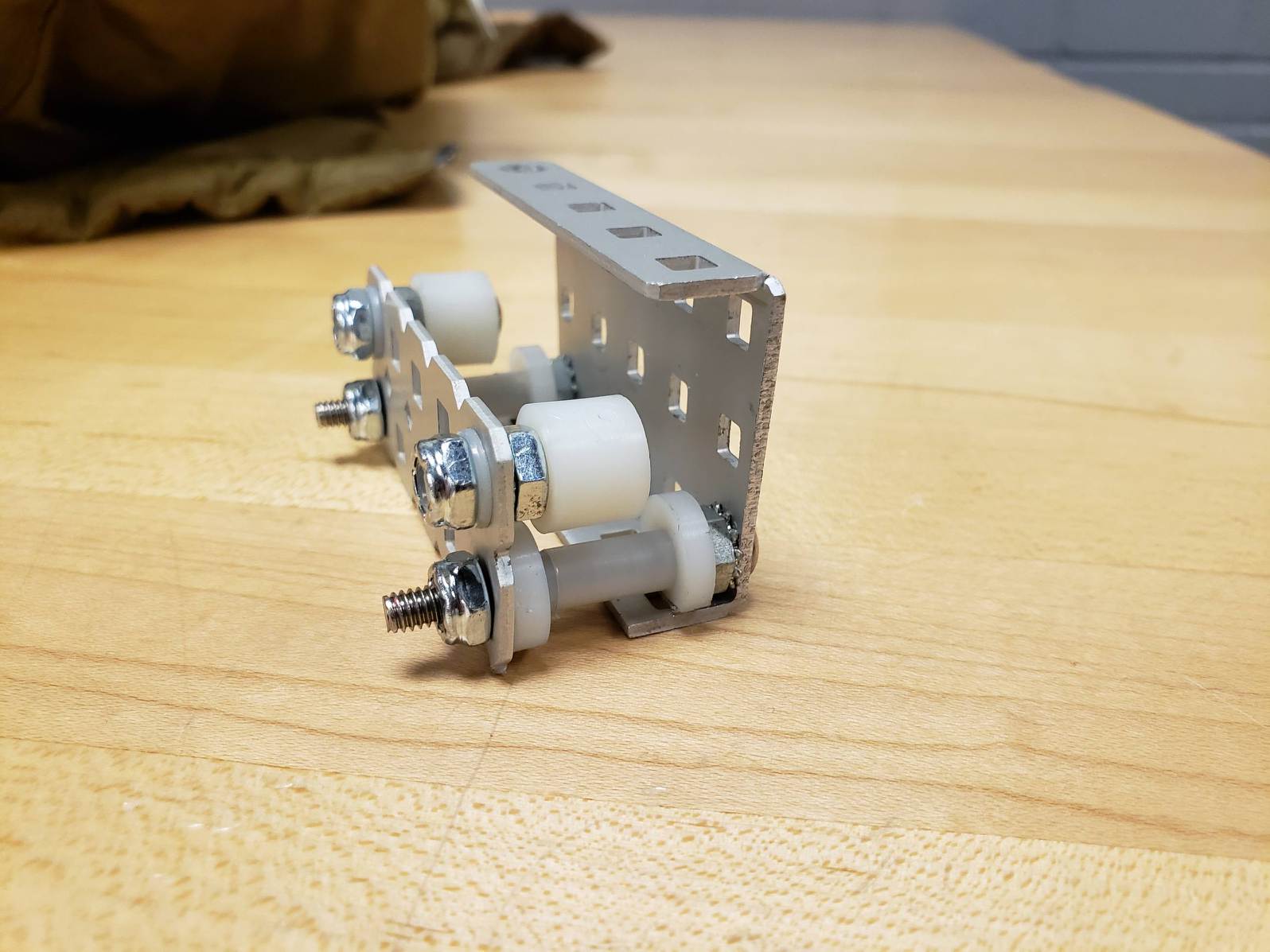 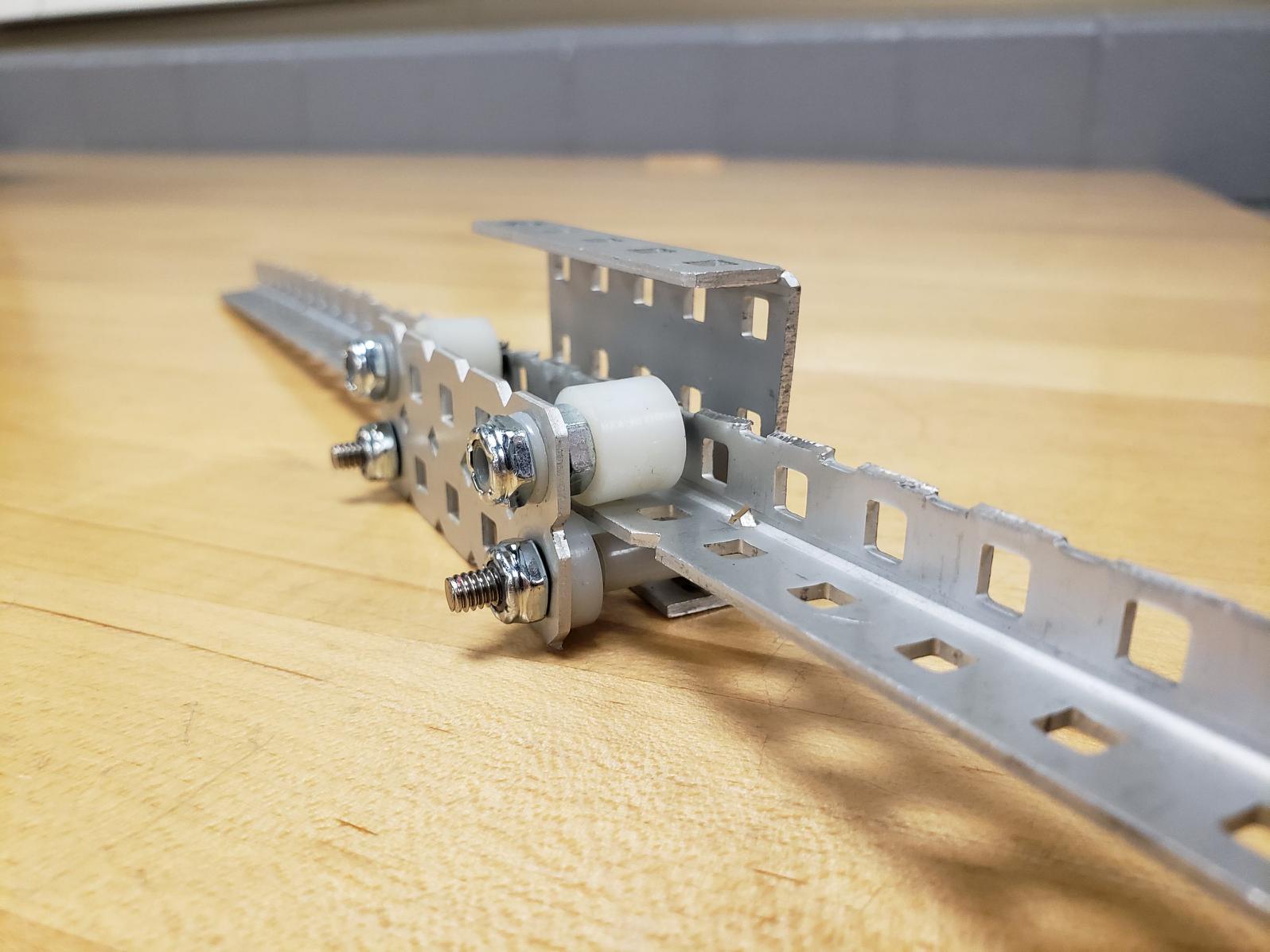 Just put these on the outside of the angle pieces and it will work fine. We just adapted that design to fit in a c-channel since we already had the tray built. 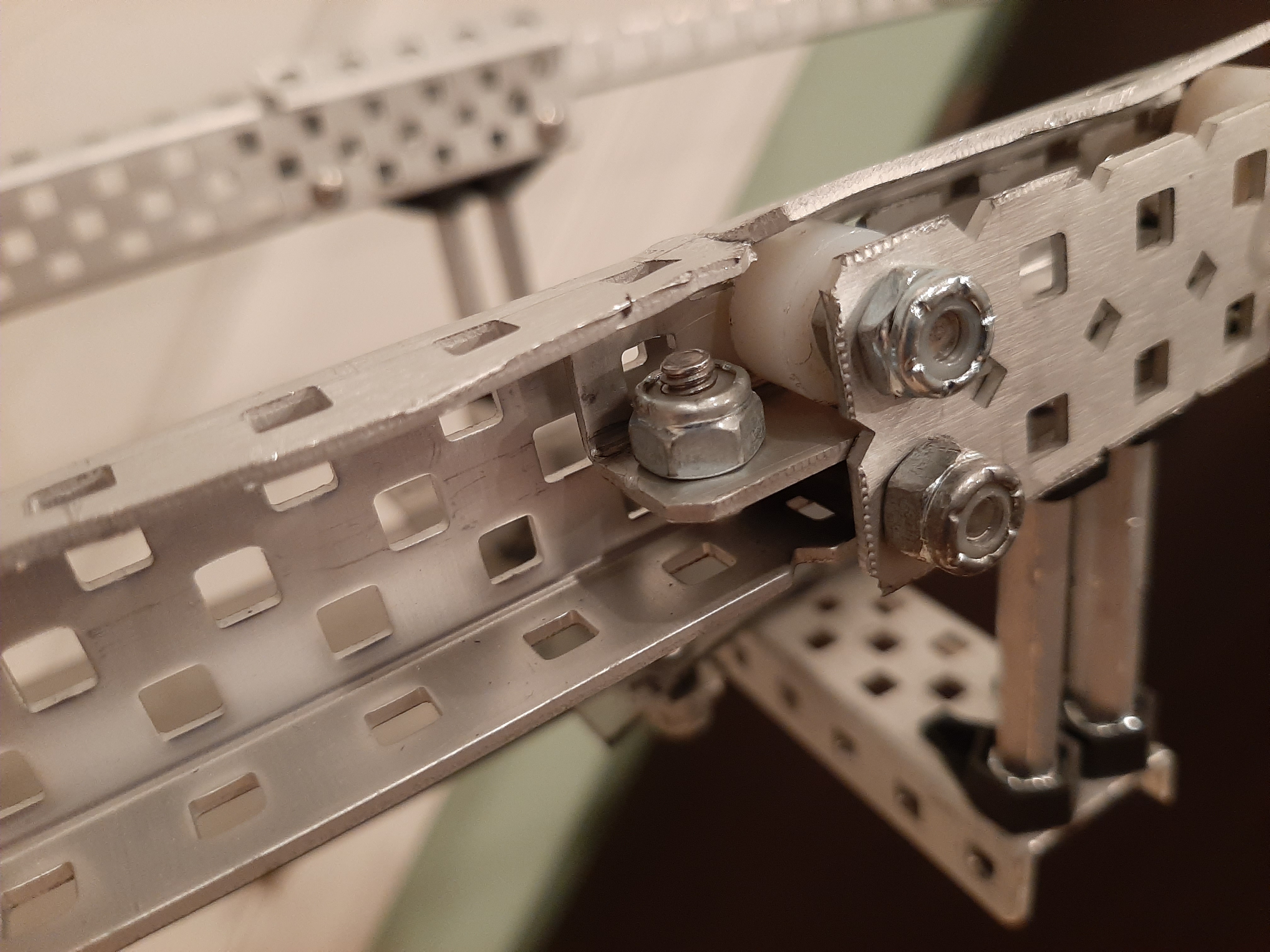 Good design, but a lot of us do not have the resources to make entire C-channels unusable for the next generation of teams. Our coach would kill us if we bent it out like that. We all are using folding trays

it takes up a larger footprint and weighs more.

C-channel trays do carry a larger footprint. L-channel trays can fit in a 12 hole wide configuration where c-channel can fit in a minimum of 14. This is really important for complex trays, as a width of larger than 26 (entire robot) prevents easy deep stacking in the large zone. I also agree that the extra flange in C-channels make them more stable. However, without actually weighing the parts, I do believe c-channel and L-channel have the same weight. They have the same volume of metal, just bent differently.

That being said, you don’t need to use the same system for the entire tray. I’ve seen a couple teams use L channel for the bottom stages to have slimmer profile bases, and switch to C for the top to make sliders/telescopic stages easier and more space efficient to build.

The less fold outs, the better.

Not sure how true this is. Hypothetically, yes having retractable stages is not only more space efficient but also significantly easier to drive with. That being said, telescopic stages act as caps for your cube capacity. With a 2-stage plus telescopic, your limited to roughly 9-10 cubes built optimally. To push your capacity to 11-12, you’d need a 3 stage plus telescopic, which adds a significant amount of weight to the end of the tray. In that case, it can be argued that just sticking a lexan/string 4th stage on the end of a regular folding 3rd is lighter and more simple than a 3 stage + telescopic fourth. Footage from China supports this theory.

Good design, but a lot of us do not have the resources to make entire C-channels unusable for the next generation of teams. Our coach would kill us if we bent it out like that. We all are using folding trays

They are not completely unusable; the last segment can be cut off. Also, the tray can be built with 1x3x1 c-channels and it will fit. We just didn’t want to rebuild our tray. Also, though we haven’t tried it, you could probably make it fit inside a 1x2x1 using thinner spacers.

This is case dependent on what this team wants to do but yes I agree. I also think cycle times are impacted by the tray size. Fully extended trays don’t aid in cycle times and they can possibly impair maneuverabiltiy (this also depends on the driver). But for the most part, telescoping tray is more stable and compact.