My team is using a snail bot and has been having trouble with releasing the ball out the vertical intake/hood. Sometimes it works perfectly and sometimes it doesn’t (it isn’t extremely consistent). It also can’t really score when there are more than two balls in the vertical intake. The top roller is geared for speed (84 tooth gear to a 36 tooth gear) and both motors on the vertical intake have speed cartridges (600 RPM motors). Does anyone have suggestions or advice?
Also the intake in the video seems to not work well but that problem has mostly been fixed. The video shows when the release did bad and when it did well. 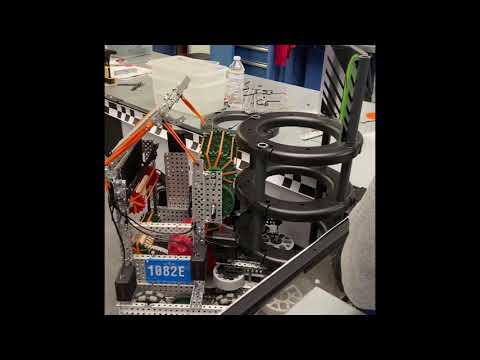 looks mostly like a problem with the hood and roller geometry. the angle of your hood seems too shallow for the release height, and the rigid flatness of it can lead to inconsistencies. I’d recommend having a curved polycarbonate hood that will gradually deflect the motion of the ball from up to across, instead of a flat plate that tries to do it all at once. you can find plenty of examples just by watching reveals.

also not really related, but your intakes are super sketchy. you’ve got the right idea with their geometry, but using a flat bar for an important structural component is a big no-no, and whatever you’re doing to mount them to your base is super floppy (can’t really tell from the video, so it’s hard to say.) your drive and towers seem pretty sturdy though so that’s pretty good (although I really want to question to use of that gearbox frame piece you’re using).

Looks to me like your shot angle is too low to consistently clear the front lip of the goal. I’d have your hood angled higher, maybe upwards of 45 degrees? That way your shots will go above the lip of the goal rather than into it.

Thanks the intakes are a little better than in the video but I’ll review over them a bit more and look over your suggestions.

Were these run on different battery charges?

Also in case you don’t like the squeaking, make sure your goal’s third ring up is screwed into the corner bracket.

They were all around the same time

Well if not the battery then I would certainly go with @Xenon27 and @2775Josh with this, they both cover the jist of it. I also recommend starting with:

have your hood angled higher, maybe upwards of 45 degrees

Just for any time constraints, but we’re using a polycarbonate hood because we find better uses with it.

Putting the video at .5 speed you can more easily see one of the problems causing the inconsistency. For the last two shots, the first one which missed, the ball took several bounces between the middle roller and the back wall before hitting the top roller and exiting the hood. This stopped a lot of momentum and caused the ball to go short. In the last runt the ball took less bounces and the ball took a reasonable path into the goal. Try and create a much smoother transfer between the middle roller and the back wall so that the ball does not slow down and bounce around. This will increase consistency and then you can begin to tune the hood angle.

The ball needs to be squeezed, at least a little bit, for the entire path through your indexer. There are a couple of gaps in your path with no compression. Sometimes the ball has enough momentum to make it through those spots, but not always. As someone suggested, having a curved hood will help apply consistent pressure. Having something similar where the ball rises inside the robot would also help.

Alright thanks for your inpu!

somewhat of out of context, but add some of the nice grippy boy to the lexan on the bottom, i can see ur bottom roller somewhat struggling to index it sometimes. Adding some grippy bois (padding that u use for ur hood) to the bottom lexan will just make intaking/indexing a lot easier.

I think that what @jrp62 says is right, it just doesn’t have enough momentum to make it all the way out of the hood sometimes. I would suggest maybe making at least your bottom roller on a larger gear, that might help with the compression.

I had the same issue. My team has the same design and we fixed that issue by swapping out the rubber band rollers for vertical tank treads with rubber flaps. We also raised up the top intake to get it closer to the goal. Hope you solve your issue!

We had this but this was a slightly old video so so it didn’t show we had it yet (if you were wondering when we first added the padding it worked so that makes you psychic). Also the way you worded this was great.

We fixed it but thank you for the input! I’ll make sure to keep what you said in mind if we have any more troubles.