I’ve been lied to by a man named “Milo” already that he’s on that team… PTSD. how do I know it’s you

wdym? Milo is also on the team (secondary notebooker assistant).

It has come to my attention that someone has been impersonating team 4154X USSR on these forums. I would like to clarify, as a member of team 4154X, that @nitrospam is NOT on team 4154X nor ever has been. I have spoken with him in private and he has said that he resides in Kansas, and has never been to the state of Florida. I am disappointed that members like him have tried to take credit from our team on the VEX Forum. Please do be aware of my comments.

What I don’t get is how you learned of this. Nitro spam tried to gaslight me while I was dming him into believing that he was a member of your team. However, I’m not entirely sure yet he was gaslighting. Now that you’ve come out and said that he’s not a member of your team I’m not as suspicious, but I was lead to believe that your team tried to get someone into our alliance to learn about our teams strategies and get the advantage on us by pretending they WERENT, but then I clicked the link in their profile and it went to 4154, and I figured it out. I do like thst you made your account 5 hours ago, that makes it much more believable than if you were already on the forums. The conspiracy theory I came up with is so convoluted and underhanded that I really don’t know if it could even be plausible. Idk. My brain hurts

Especially since he posted one of your robot reveals.

Hey Everyone! Just wanted to post our End of The Season reveal here, 1 week until the new game so lets celebrate this awesome, complete, controversy less game! Good luck in Frisbee Frenzy

In April 2020. You’re telling me that you, nor any member of your team, has known about this guy for over TWO YEARS? Somethings off here mate. He has your robot.

Firstly, I believe that this photo of my worlds jacket is more than enough to justify my affiliation to 4154X. 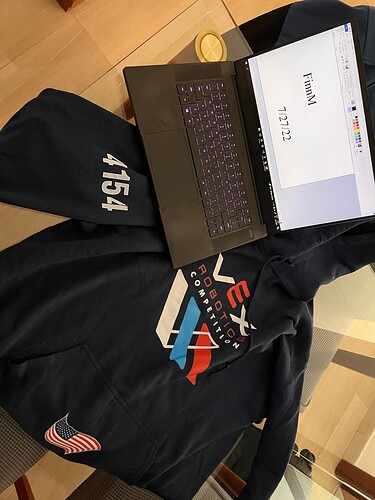 I would like to once again reiterate that @nitrospam is not a part of team 4154X. I do not know the said individual personally, nor do I know his motive on pretending to be a part of 4154X.

What I don’t get is how you learned of this.

A friend of mine told me about this situation last night.

To be brutally honest, I do not care about a random alliance some random team wants to make on the forum. I have no intention to join the alliance, nor do I believe that turrets will be successful this season. While I don’t know what team or what region you are from, I can confidently say that I can win against any turrets by simply playing defense against the robot for 3 seconds so their aiming system breaks.

In April 2020. You’re telling me that you, nor any member of your team, has known about this guy for over TWO YEARS?

Correct. Just as you have stated earlier how my account is recently created, I, as well as my teammates, have never used the VEX Forum. In fact, I don’t believe that any intellectually sound discussions happen on the forum. As a result, I stay mostly on discord servers to discuss robotics with other teams.

Once again, I do not know who the said individuals is making posts on this forum on my robot. I have never known him personally, nor do I know his motive.

I’m sure you’re a part of 4154X. We’re not just some random team though, we’re 7121B from south Florida. If you happen to remember us from states, we’re the team you said was a “good choice, and that if our sister team doesn’t pick us we’ll pick you” but you inevitably got chosen by 6432C, I believe. And we’re certainly coming for your title as South Florida’s best team. Doesn’t really matter though. Not letting the guy in until hell freezes over, dude lied to me one way or another. Plus this conspiracy theory is really over the top so I don’t even want to believe it lol.

But Jesus Christ this is a weird situation. How’d you guys even react that this dude impersonated you for TWO YEARS?

Edit: I now get how they got your reveal. You guys posted it on your channel, he reposted it. Ah ok this makes much more sense now.

If you happen to remember us from states, we’re the team you said was a “good choice, and that if our sister team doesn’t pick us we’ll pick you” but you inevitably got chosen by 6432C, I believe

this did not happen lmao. also good luck trying to win states, i look forward to a good fight this season

Are you still trying to impersonate 4154X? Lord you don’t know when to give up

I’m fine with joining an “alliance” that works as a group toward perfecting a turret, but please, keep it calm.
So, because of the fact that I haven’t been able to get many details about my program for the 22-23 year, I don’t know my team number, as I’m going to high school.
Because of that, I haven’t been able to physically start building the robot yet, and won’t be able to until around the end of August unfortunately.
On the other hand, I’m in the process of fine tuning my CAD, so I hope I can still be a valuable member of this alliance.

I had the opportunity to meet 4154X at worlds last season. I don’t, however, recall meeting a Finn, though i did meet their other members. So I hypothesize that both FinnM and nitrospam are lying about being a part of 4154x to try to get into the turret alliance. I’d be cautious

I don’t believe that any intellectually sound discussions happen on the forum.

Man I’m trying to not have an aneurysm right now, attempting to solve this Sherlock Holmes mystery.

SOMETHINGS up here. Either one or both of these people are lying. This guys literally saying he has the exact same team number and letter as the best team in our region specifically, all by coincidence… here’s my fan theory:

4154X DOES remember us, they’re worried about the turret design, and they were trying to get into our group so they can have an upper hand in the matches by knowing everything about our robot before hand. What I’m thinking is that nitro (an actual member of 4154X) was gonna say “a turrets too complicated for this competition, we’re gonna do a normal one but help you guys with the design” and then get everything about our robot, and use it against us when they see us.

@FinnM even though I’m accusing you of some WACKY stuff, if you’re actually the real deal and this whole thing is a misunderstanding don’t take it personally. This is a complicated situation, so I think you can get why I’m making these allegations.