I was thinking, since my team is about to meet the motor limit, is there any way for our team to have one motor perform two tasks? Specifically, we would like to different tread systems to spin in opposite directions and for one of the treads to be able to spin slower than the other.

yes, you can use various motor saving techniques that will allow you to get more out of your 8 motors. an ideal opportunity for motor sharing is between two subsystems that don’t have to move at the same time. for this, you could use a transmission, 4 bar transmissions in particular could be good for something like powering a lift or a tilter off of your drive. another good opportunity is between 2 subsystems that only need to spin in one direction. for this you could use ratchets so that when your motor goes one direction it powers the first system, and when it goes the other way it powers the other mechanism.

the first type of motor sharing sounds more practical for TT, so I recommend that. If you want to know more about how a 4-bar transmission works, I can explain it deeper.

81K Differential
You can do this, credit to @Codec from 81k

Yeah Xenon, could you explain a 4 bar transmission to me further?

another single motor example is the double ratchet, which is just 2 opposing ratchets stacked onto eachother. This is good for 2 single-direction functions.

between two subsystems that don’t have to move at the same time.

keep in mind that a 4 bar transmission does allow both systems to move at the same time, they both just have sacrifice speed. (you could, for instance, run your tilter at 25 while your drive runs at 75 with a 4 bar transmission.) This all depends on differing the “grouped” motors’ speeds.

yes, this is true, though you don’t get full power unless you do one at a time.

Sorry, but could someone explain further how their systems work? I haven’t heard of these thing before.

I believe this is what is meant by a 4-bar transmission as mentioned by Xenon27:


We personally use one of these 4-bar transmissions on our robot and it works great but it requires two motors not one.

An alternative to the double ratchet would be this: 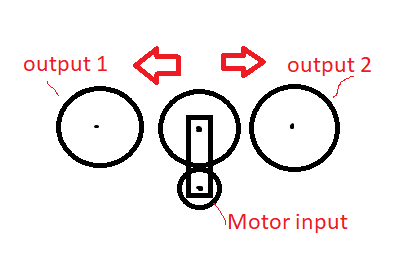 The below image only has one of the two output gears connected. 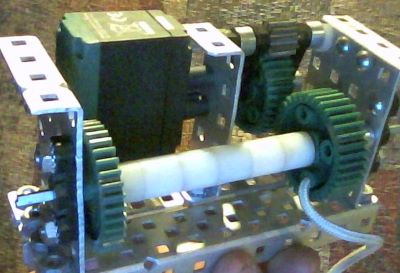 (Edit to clarify):
The design relies on the friction of the ‘drive arm’ with the motor axle to swing the arm into engagement with one of the two output gears depending on the direction the motor is turning.

I think that would be useful for saving motors however I don’t think for tower takeover there is really anything that you want moving at the opposite direction from the other, aside from the intake rollers.

There was a lot of good information posted in this thread.

Ratchets may be more intuitive to understand than differentials and may seem like an easier option to build.

However, to be successful, with either ratchets or differentials, you need to carefully plan all your robot functions. Otherwise your robot will be less competitive compared to the other robots with independently powered functions.

315G did an in-depth video about their TP robot: 315G Ratchets Explained (6 motor drive, 2 motors for everything else)

The biggest limitation of ratchets is that you cannot share power from the drivetrain motors that require continuous two way rotation.

Differential transmissions could tap into drivetrain motor power, but have their own limitations. If you try to power two functions with a differential simultaneously, you lose both total power and controlability and might, just as well, use independent motors for better results. (more information here)

For example, sharing motors between drivetrain and DR4B will not work well, because you may need to maneuver around towers, while you adjust DR4B position. On the other hand, sharing motors between drivetrain and tilter could work well, because tilter has two stable positions at the end of its range and when you raise or lower tilter your robot is unlikely to drive.

In all cases for the motor sharing to be viable you have to achieve very high build quality. Otherwise extra friction will negate any motor saving benefits.

I wouldn’t recommend using 4-bar differential with V5 motors if all your drivetrain power has to flow through the differential. It is possible to build, but you have to utilize every known trick to minimize friction losses. For example, this robot uses partially threaded screws instead of the square axles:

another 3 motor robot from ITZ:

For best results, I would recommend mounting V5 motors into rotating frame, supported by the special bearings made with drilled out 393 gears: 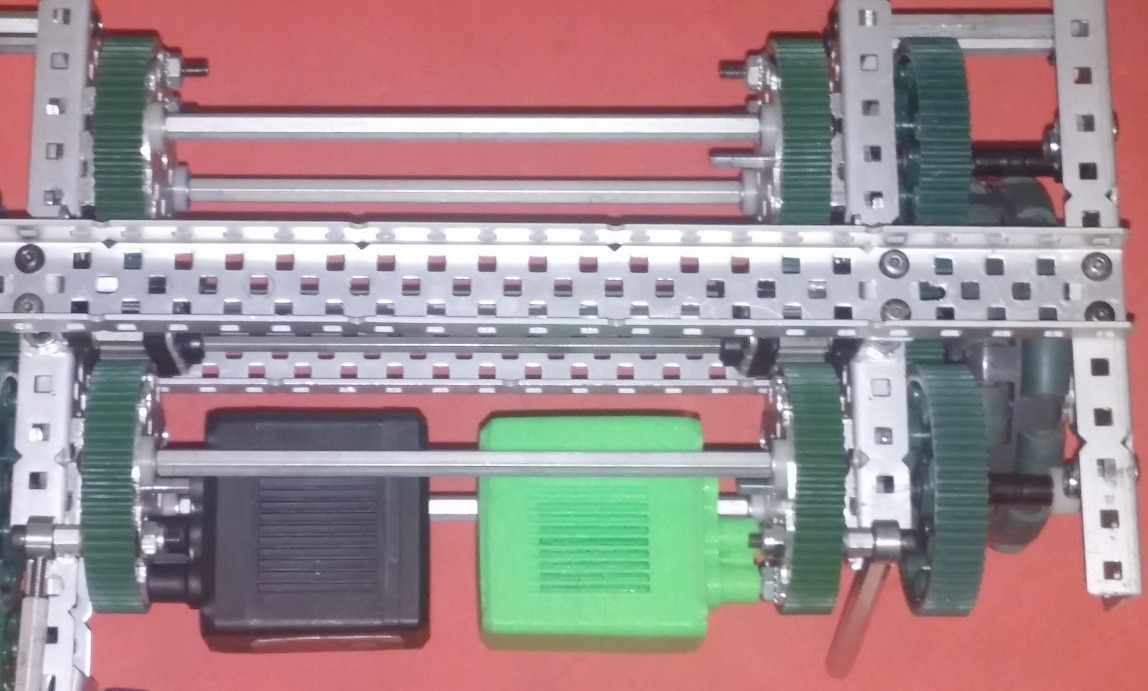 Finally, you need to be ready to roll out your own special PID algorithm that fuses control of both functions in one. It is not difficult, but you wouldn’t get to the max power without it.

Well, unless you have more information about @Kwan18’s robot, you may or may not be correct. From what was provided in the OP, it is not clear, at least to me, what is the end goal.

In this case, you have to provide all options with their cons and pros, so that @Kwan18 could compare them and choose the simplest one that meets the design requirements.

I agree, that the less FANCY PANTS the final design is, the more reliable it will likely work.