V5 Brains out of stock

Does anyone know if V5 brains are actually out of stock? I live in Indiana and on the vex website it has been saying that V5 brains have been out of stock for 3 months. Is this happening to anyone else?

V5 kits and bundles that include V5 brain as well as the rest of V5 electronics items all seem to be in stock.

But having individually packaged V5 brain out of stock gives me a glimmer of hope that VEX is going to release V5 brain hardware update, hopefully featuring better ESD protection, more durable USB port, and larger internal capacitors for processor board to survive momentary power interruptions that are likely the cause of many white screen events.

One more reason to look forward for new products announcement at the upcoming VEX Virtual Worlds 2021.

So is the only way to order a brain is by buying the bundle? (Thank you for your help)

If they are OoS on the website, your best bet would be to call sales and see what they say.

But having individually packaged V5 brain out of stock gives me a glimmer of hope that VEX is going to release V5 brain hardware update, hopefully featuring better ESD protection, more durable USB port, and larger internal capacitors for processor board to survive momentary power interruptions that are likely the cause of many white screen events.

I admire your optimism. I’ll go with parts shortages causing production delays as the cause but V5.1 is definitely worth dreaming about.

But doesn’t VEX Robotics employ the same Engineering Design Process as they encourage students to follow in addressing issues with their robots?

While it’s true that making changes to the V5 electronics design and implementing them in production takes time and is slightly more complicated than rebuilding a VRC robot over the long weekend. If I may say, it’s like comparing getting Evergreen container ship unstuck from the Suez Canal sandy banks vs picking up and relaunching a 5" RC boat in the pond…

However, three years of testing V5 system in the wild seems like enough time to figure out its most obvious shortcomings and implement an incremental fix by adding TVS arrays for better ESD protection, larger capacitors to reduce chances of whitescreening due to intermittent power interruptions, and sourcing a more robust part for the USB port.

This would totally make sense for the company whose executives advocate striving for excellence at every talk they give to the STEM students crowd.

No, not likely. If anything the global semiconductor shortage would be the driving cause, but again unlikely.

The cause of single brains being out of stock, while V5 kits are in stock, is just a matter of not forecasting the demand accurately. The kits are packaged in China at the point of manufacture, not in the USA. Vex is not going to break open kits to get individual parts-- that’s not how inventory management works.

But doesn’t VEX Robotics employ the same Engineering Design Process as they encourage students to follow in addressing issues with their robots?

Almost. The students don’t have to turn a profit.

Product updates and enhancements come with risks. Then you get to balance risk/return. Interestingly the port ESD problems could be resolved though use of RS485 driver with built in protection meaning component change only. Wouldn’t surprise me if that already happened some time ago.

I don’t know if RS485 driver chips have been updated recently from the original SN65HVD1782 part, that we found in the V5 brains back in 2018. Perhaps, @Art_Dutra_IV or @jpearman would have an answer.

I’ve taken some more internal pictures of the V5 brain and the RS-485 drivers are SN65HVD1782. SN65HVD178x datasheet says that it is rated up to 70v for transient voltage pulse and up to 16kV for ESD, but it says nothing about maximum current or power dissipation in the event of ESD. SM712 chip, that you have recommended, is rated at 19A current pulse and 600W power dissipation for ESD of up to 30kV. SM712 datasheet says that it has bi-directional asymmetric TVS diodes (+12/-7v) specifically d…

However, the power it could dissipate was, apparently, not enough for the charges that continuously spinning intakes of a typical VRC robots could produce and accumulate.

The datasheet for SN65HVD178x chip (pg. 20-21) recommends to use an external TVS array for higher energy (industrial) applications:

Although the SN65HVD178x family is internally protected against human-body-model ESD strikes up to 16 kV, additional protection against higher-energy transients can be provided at the application level by implementing external protection devices. 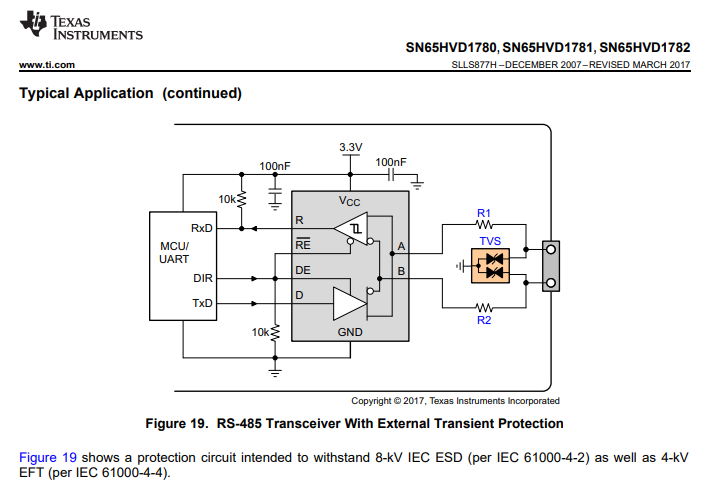 I don’t remember if we didn’t find any pin-compatible drivers at a time that offered better protection or they were too expensive, but the conclusion was that external TVS diodes like SM712/ SMBJ43CA offered good protection at a very reasonable price per channel.

Wouldn’t disagree with the use of external TVS diodes, was pointing out there are drop in part solutions which would probably enhance ESD performance. No idea what was originally used and currently used for drivers in the V5 hardware. Some of the RS485 line driver designs I’ve worked on survive continuous high voltage on the line and recover once the fault is removed with 0% failure over 10+ years. For reference SM712 is relatively high cost vs. individual TVS components and if you’re not aiming for asymmetric operation range from -7 to +12V it’s common to use a pair of bidirectional TVS diodes.

V5 Brain appears to be back in stock. Take your VEX robot to the next level with the V5 System Bundle. This bundle includes everything you need to get started with V5, and is engineered to provide the most advanced robotics experience, right at your fingertips. Designed to scale from...

Is this out of stock?

Is this out of stock?

Bring’s back memories of “ships in 8 weeks”!

But at least there’s an anticipated date.

I was responding to the V5 System Bundle question.

Definitely good to have V5 Brains around for new season.