V5 Vision Sensor "The Camera detected must be unlocked"

My team just got a vision sensor and I am trying to program with it. However, the brain screen keeps displaying the message “The Camera detected must be unlocked” what is this and how would I go about it. Also, is there anything special that I would need to know when programming the vision sensor?

This is happening to several robots in my class as well. I’d like to know the solution to this too.

Can you verify that;
The Vision Utility can connect to the vision sensor and display a live image
post the sensor firmware version from bottom left hand corner of the vision utility window in this topic.
can you set a single signature (one simple colored object) and read that in a small program.

We have the same issue with ours. When connected to the brain and also to the computer by USB, and using VEXCode Blocks to try to configure it, the configuration screen says “Disconnected.”

That sounds like a different problem. The “The Camera detected must be unlocked” message when connected to the brain is not related to USB functionality.

Yes, the vision sensor can connect and display a live image.
The Firmware version is V1.0.18
I cannot get it to track an object yet.
It will display in the Vision Sensor Utility Window, but it will not track from a program.
I have been using a green ball from Nothing but Net to test for now.

I’m also now having this problem, before today it was working fine and now the two robots that are using the vision sensors are displaying this message after running a program.
It appears to not turn on at all (any LED or output) while code is running.

Then press and hold down shift+option (or shift+alt on windows I think) and a new control will display on the status bar that says “enable V5”, select that so it turns on. The update rate will now drop to about 2 frames per second. Do you still see the object you selected and set a signature for shown with a rectangle around it ? If you do we need to continue debugging. If you do not then this vision sensor really is locked and you need to contact vex support and get it replaced. Let me know what happens. 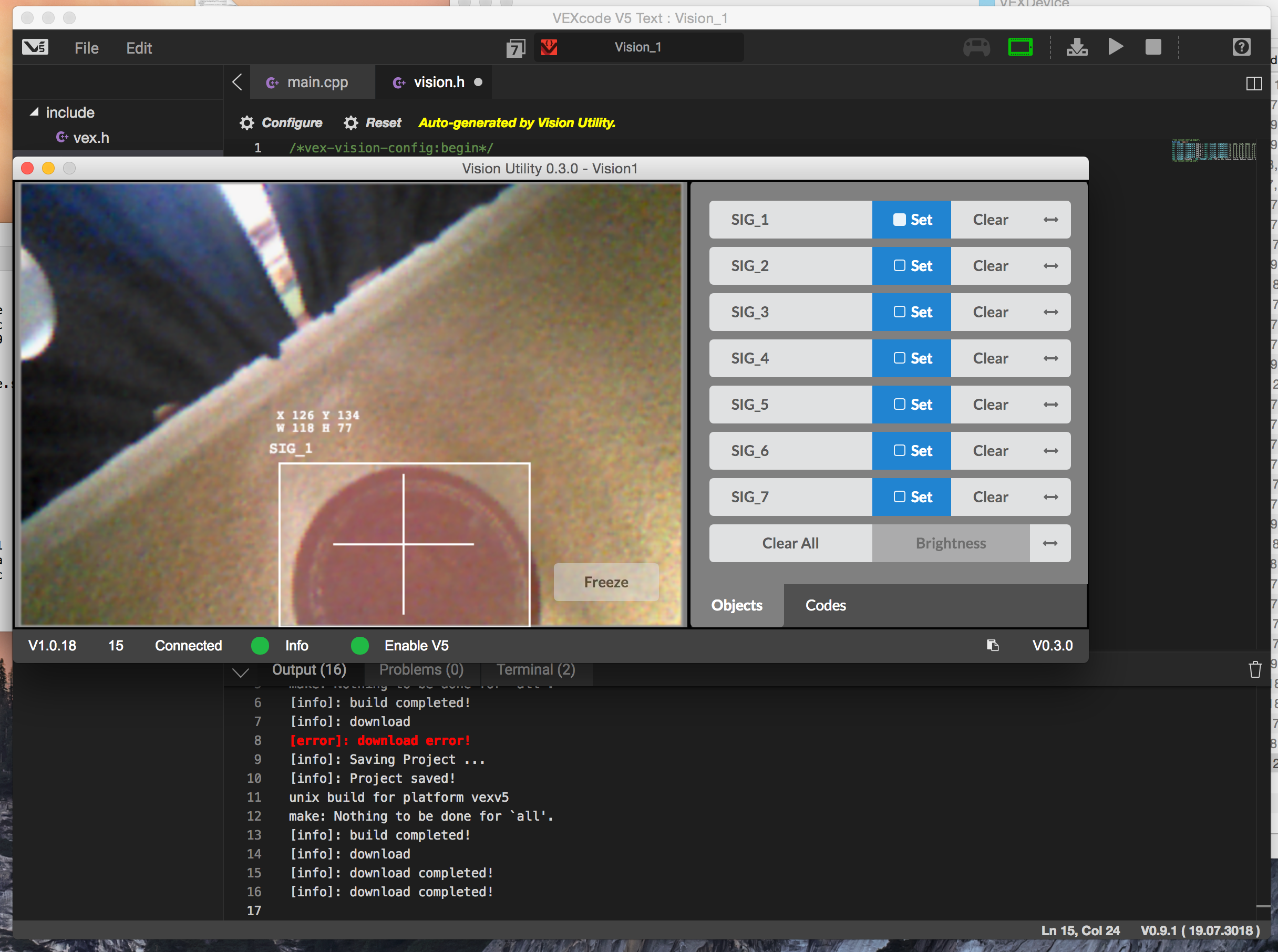 I’m also now having this problem, before today it was working fine

What changed ? You say it was working fine and now is not, did you update the brain ? How old are these vision sensors ?

Honestly I hadn’t worked on it for about a week. The brain and sensors haven’t needed any updates since, but I’m pretty sure there was a firmware update for the brain but at the time I wasn’t using the vision sensor. Vision sensors are pretty new only been using them for a month or so.

vexos V1.0.8 added the alert screen when we detect a vision sensor that is locked, but other than that we didn’t change any other code. If you dismiss the alert screen, does your program still work ?

Dismissing it seems to keep it from popping up again until the next reboot, but the code doesn’t change, it simply doesn’t see anything. I haven’t changed the code or lighting either so I don’t know why it wouldn’t be seeing anything. Everything is included and defined.

but did it ever work ? If you have a vision sensor that is locked (unlocking is part of factory test and QC) it would never have worked. The locking is inside the vision sensor and nothing to do with vexos or the V5 brain.

When I do the “Enable V5”, it still shows my item in the window with the tracking rectangle around it.

My camera also worked last season, though we didn’t use it for signature matching; we just used the streaming video over wifi to a laptop.

Same thing here. I am having that same problem.

I was having this issue this morning when I unboxed my vex for class. After reading this forum and seeing there wasn’t a quick fix I tried tinkering around with it. I noticed there was a micro usb port on the bottom of the vision sensor and I wasn’t using it. I had figured that being connected to the brain through usb was enough, but when I swapped the cable over to the vision sensor everything began to work. Maybe your problem isn’t as simple as mine, but good luck! (I felt like an idiot when I saw the port lol)

vexos 1.0.8 has a bug. We are displaying this alert when not needed. It will be fixed in 1.0.9, but for now just clear the alert, it has no impact on user programs. Sorry for the inconvenience.