The PTC Education team is proud to be partnering with RECF for a new student design challenge using Onshape! Onshape is a cloud-based CAD software platform that offers real-time collaboration. The theme for this competition is to design a robot that can aid in the recovery of our ecosystems and tackle environmental challenges. If you’re interested in learning more about the Nature Recovery Robots Design Competition, learn more about it at this link: Nature Recovery Robot Design Competition

To aid teams who are designing their VEX robots in Onshape, the PTC Education team has released a VEX parts library. This library consists of 13 documents organized by the type of part. It contains many of the most common V5 parts, including all of the parts present in the Competition Super Kit. If you’d like to use this VEX V5 parts library in your workflow, you can check it out at this link: Official VEX V5 Parts Library

The winners of the Nature Recovery Robots Design Competition will be announced at the 2022 VEX Robotics World Championship! We’re looking forward to all of the awesome submissions that teams will create using Onshape!

(Split post due to link limit on new users)

If you want to learn more about Onshape and how you can implement the VEX Parts Library into your workflow, the PTC Education team is hosting a webinar on April 5th at 4:00 PM EDT titled “Design Your VEX Robot in the Cloud Using Onshape”. If you’d like to attend or would like to be sent a recording of the webinar for later viewing, sign up here! Design Your VEX Robot Webinar

We have also created a feedback form for the VEX V5 parts library - if you see something important is missing or just want to give some feedback, let us know here: https://forms.gle/GQJTfpuKewEFy2tt8

I’ll be watching this thread, so feel free to provide feedback here as well!

So I read it and I am not understanding something. Do I have to use vex parts only or can I mix them or completely make a robot from scratch?

You do need to use some components from the VEX V5 virtual parts library, but you can also design custom components that you could manufacture. Part of the scoring is based on feasibility and manufacturability. At a minimum, we recommend using the VEX control system and motors.

Also one last question, Does this model have to be animated or are we just making a concept?

Nope, it doesn’t have to be animated. Having the correct mates to allow things to move or adding different mechanical relations will earn more points in the “Completeness & Complexity of Design” section, though!

Is there going to be an IQ parts library soon? The current one, or at least the one I’m using, seems to be all surfaces, so when you animate a four-bar, for instance, the beams don’t hit each other and stop, they just go right through each other. That makes it harder to pick up on when there is a real problem with the design.

We can certainly look into making a VEX IQ library if there’s an audience for it!

Almost all CAD software will allow you to place two parts into the same volume of space, though some do offer a sort of “collision detection” for situations like you describe - it’s far more resource intensive to check for part collisions as parts move. Onshape doesn’t currently have this feature implemented. You can set rotational/slider limits and run interference checks on parts once they’ve stopped moving, though.

beams don’t hit each other and stop, they just go right through each other.

No parametric CAD that I have used (SolidWorks, Inventor, Catia, OnShape) has this feature as you describe it. To restrict motion, you set up what is called a “limit mate” where, for example, you specify the allowable angle of rotation, or the limits of a distance motion.

I would love to go to the webinar tomorrow, but cannot make it, unfortunately. Will it be recorded?

Yes, it will be recorded! If you sign up at the link above, we’ll email you a link to the recording a few days after the actual webinar. It’ll also be in the Onshape Learning Center so anyone can go back and watch it.

I would love to go to the webinar tomorrow, but cannot make it, unfortunately. Will it be recorded? 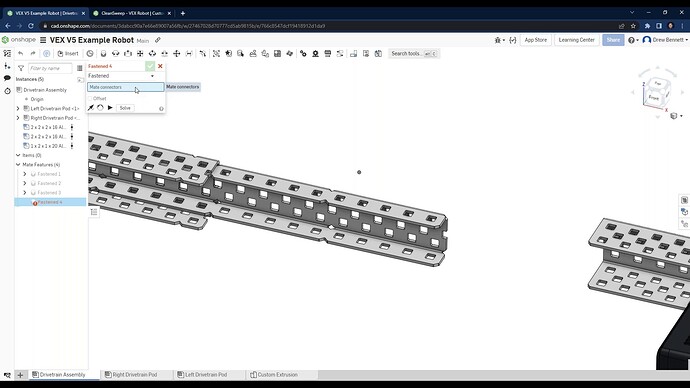 Design Your VEX Robot in the Cloud Using Onshape

In this webinar, learn from two Onshape experts and VEX alumni how you can set your team up for success this season by incorporating fully online CAD.

We can certainly look into making a VEX IQ library if there’s an audience for it!

My life would have been so much easier if I could have built IQ robot concepts with Onshape. Its hours of work to find out a part is 1 hole too long and I have to take things apart.

I built 6 robots along with a lot of modifications on each concept. Work was in the hundreds of hours for this season. I didn’t know until near the end of the season that much more complex robots like the ones in FRC could be built entirely on Onshape before they went to production.

I think with libraries like how it was provided with V5 would encourage more students to try out CAD as a method for robot design.

When will the hs winners be announced? At worlds awards/closing ceremonies?

I’ve been told that they were announced during the high school finals stream.

Ive yet to find anything about it on the robot events or onshape websites, and I’ve heard that they didn’t award a college winner despite my team making a submission. Maybe it just didn’t meet minimum criteria