Also, have we reached a consensus about which regions are able and unable to attend in-person Worlds? Curious to know which regions are not sending teams since this directly affects how many teams are let in off the waitlist.

From what I’ve observed, the VIQC’s Open Division at Worlds had less than 100 teams for the middle school division; perhaps it’s not too farfetched to assume that the same could be done for VRC.

Is there a way to see the waitlist for worlds spots?

Is there a way to see the waitlist for worlds spots?

Yes if you are the event administrator, otherwise no.

Not sure how Kentucky got to be on the 18th

There are also, seemingly, several “Texas State Regional Championships” taking place during this week (3/15 and 3/16).

I suppose like anything, there are exceptions to every rule…

I remember a few years ago Texas had some state-level championships for different levels of their school classification system, plus one for non-public-school teams, so that could be what this is (if Texas already had their regular Regional Championships).

For Kentucky and other regions, I wonder if they had to reschedule it, or if they couldn’t find a venue available before March 14th.

They delayed Kentucky in anticipation of weather that ended up not happening… was supposed to happen last weekend as far as I know.

Yes, due to the recent cold front/storm, their championships were delayed by a week. They were planning to hold a last minute skills event so that teams could post scores (as it was anticipated that the moved event would not have qualifying spots), but this was cancelled once the confirmation for spots was given. 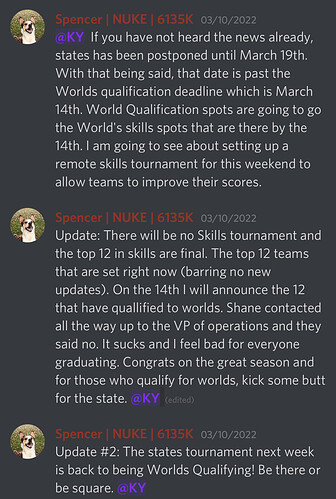 I know there has been a lot of speculation over how Worlds Waitlist works. Does anyone have any updates whether it is First Come First Serve, Skills, Random, or some other way to decide the teams that attend Worlds?

Those events are part of RECFs ongoing effort to make vrc a uil sport in Texas. I do not believe there are worlds spots from them. To the OP question, worlds registration deadline is April 15, which to me might imply the start date for wait-list.

vrc a uil sport in Texas

I think that’s closer than some realize. I’ve heard that next year is the “observation” year for UIL, and if it goes well it could be integrated in as soon as the 23-24 season.

I think that’s closer than some realize. I’ve heard that next year is the “observation” year for UIL, and if it goes well it could be integrated in as soon as the 23-24 season.

If VRC were to be UIL recognized, it would essentially put it almost on the same footing as football and other high schools sports. What teams would get from it would vary from school district to school district, but typically that means that if a team places and qualifies to whatever is next in line (state, worlds), the travel and hotels would be covered.

As it stands right now, absences are already excused for travel and whatnot regardless of classification, as usually, the only requirement for those is that the event is “school-sponsored” (you’re competing on behalf of the school)

I do think VRC becoming UIL recognized may open up the possibility for more schools to open programs, but it’s also going to depend on how funding works, and if districts would provide schools with grants for parts and whatnot. It’s really hard to say what exactly it would entail since there’s nothing currently like VRC under the UIL banner.

(sidenote: little surprised that VRC opted for UIL recognition instead of CTSO, but I’m sure there was some reason for that)

some of our iq teams got invited, i think they’re starting to send them out today

@B-Kinney @Mentor_355v I hosted the Texas State Championships this week as well as the Texas Region 3 Championships a few weeks ago. All of the standard worlds spots go to the four regionals. The State championships is done by school size classification and a division for non-public schools. It is a signature style event with only the Excellence winners advancing to Worlds. Next year it will be an official state championship along with other academic and athletic contests. I’m just glad we could keep it alive long enough to get that recognition.