What advantage does stacking two wheels together for flywheels have?

Is there any advantage in using two wheels for a single flywheel like this? 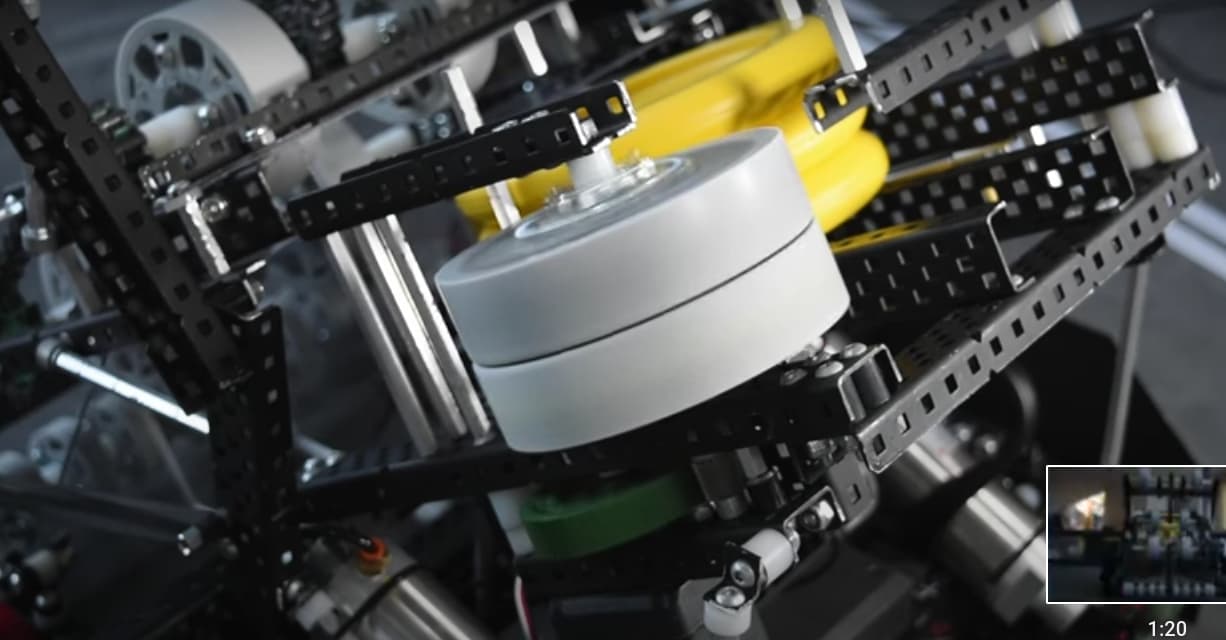 How does having two wheels help if one flex wheel can fully touch a disc?

Its all about the wheels moment of inertia. The main factor in keeping flywheel velocity up (assuming you dont want to add motors) is the wheels moment of inertia, and one of the simplest ways to increase that is by adding a second wheel stacked directly on top of the lower one. A basic explanation of the physics of this (not sure if this is needed but ive included it just in case) is that inertia is an objects tendency to resist motion. A rotating bodies tendency to resist a change in (rotating) motion is rotational inertia, and the quantified form of that is its moment of inertia. All of that is to say, the higher your moment of inertia is, the less your wheel will slow down when you shoot a disc.

Oh ok, that makes sense.
Our team is short on flex wheels, so wouldn’t using something like a 4 inch traction wheel instead of a flex wheel for the top wheel still achieve the same thing?

Also, do you know if needing more power to spin up the two wheels would make it more likely for the motors to overheat?

so wouldn’t using something like a 4 inch traction wheel instead of a flex wheel for the top wheel still achieve the same thing?

Yes, the same thing can be acomplished useing a traction wheel, a gear(add weights as well), the new flywheel weights, and pretty much anything.

if needing more power to spin up the two wheels would make it more likely for the motors to overheat?

It shouldn’t make the motors more likey to overheat, but it might depending on the build quality and the amount of friction introduced into the system. In an ideal world once the wheel is up to speed there would be no friction to slow it down and therefor not cause the motor to ever over heat. It will put more strain on the motor for ever shot.

Agreed, if properly built, increasing the moment of inertia and mass of the flywheel shouldnt make it overheat more. 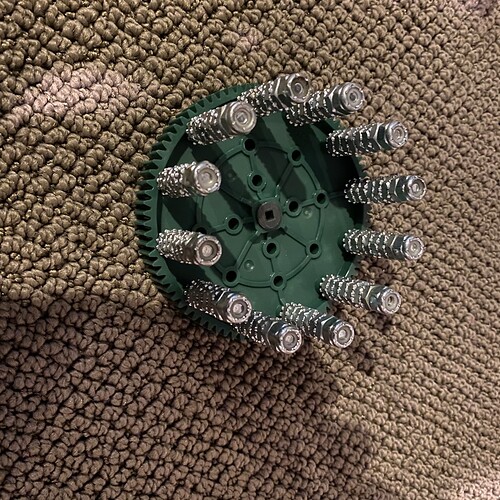 This also does wonders for increasing you moment of inertia.

It will put more strain on the motor for ever shot.

Now that I’m thinking about it, the motor wouldn’t work that much harder would it?
It doesn’t need much more power to reach the full rpm because the flywheel will decelerate less after a shot due to more inertia?

I agree that it could be less strain as it has less volocity to recover but there is no way to know in general, so the only way would be to test it and see.

That seems like a good idea, but does it run well at high speeds? Don’t the weights get pulled outward when spinning?

The weights do get pulled out at sprightly speeds, but it still works fine. Our flywheel can easily get to 3000 rpm.

I’ll test all this out on a flywheel and see how it goes. I have a somewhat working prototype but it’s nice to get in the fine details.

It should take more time to spin up (it will take some time to reach 3000 rpm), but it should take less effort to keep running, according to the law of inertia

Thanks, I’ll keep that in mind.

Too keep it simple:

More weight = more momentum to keep that flywheel spinning longer with less strain on the motor over time. Getting up to speed will take a little longer but you wont lose the rpm, of the flywheel as drastically if you only used 1 wheel.