Where would I locate a strafing wheel

I’m planning on using a H-drive (Mostly for skills) and I was wondering where to locate the strafing wheel. I’d assume you would put it at the center of gravity but if it can’t be in the center of gravity would I have to have the normal facing wheels spin so that it would turn it in the opposite direction the strafing wheel would want the robot to turn.

If you want to be able to strafe, an x-drive or mecanum drive would allow you to do so without needing to sacrifice an extra motor for a strafing wheel.

If you really want to make an H-drive, I think you want to put the strafe wheel where the turning center of your robot is. If it is not on the turning center, your turns won’t be as clean, but it should still work.

I’m using an h-drive because I have a 2 speed transmission(Meaning I couldn’t have a x/mecanum drive) and I had a left over motor I also wanted some kind of motor that I could switch where it was. Skills would have the strafing wheel and match version would have 2 motors on the snail

Are you saying you would switch the motors between matches and skills? You would have to get it reinspected every time you did this you know?

Also, do you mean mecanum wheel?

R3 b. All possible functional Robot configurations must be inspected before being used in competition.

The transmission uses both motors(No gear switching motor either) and I haven’t seen It on any robots ever. It also uses the power of both motors for high torque and high speed.

you dont need a transmission. 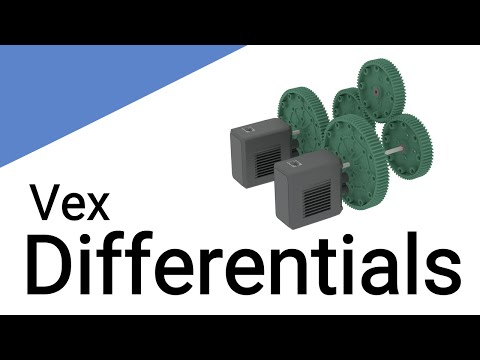 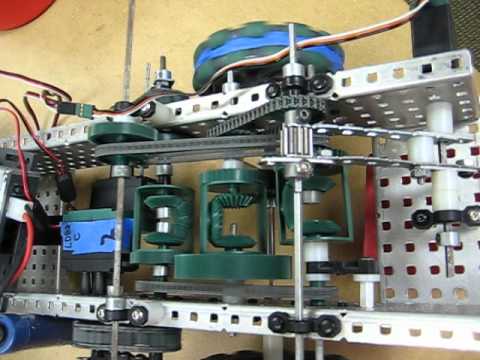 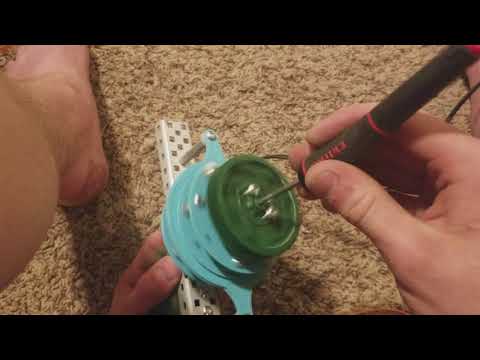 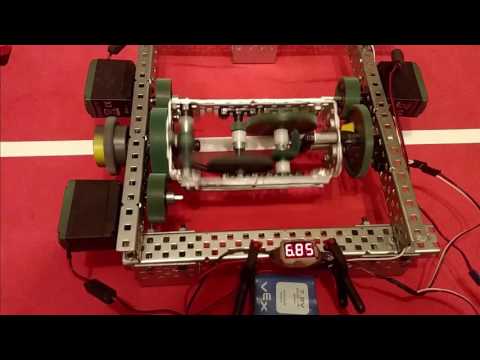 I haven’t seen It on any robots ever

Here are some helpful resources then

That’s kinda the whole point. You don’t need it, but it can help your robot’s function and it looks pretty cool too

I have the gearing figured out already and have a working prototype of it. It also should have less friction problems and is considerably smaller than these designs (Uses same principle as 3rd video but I don’t need to move the shaft)

Yeah but with differential you have to stop powering the wheels which would decrease acceleration. Also this topic got derailed so unless you can give me some amount of info on my question then please do.

Hi, I’m going to assume you are using epicyclic gearing for your transmission. An alternate would be using the relative directions of your motors as a shifting, but that would be pretty terrible. Epicyclic gearing also has the nice advantage that it creates an infinitely variable transmission, which benefits acceleration time.

The first epicyclic transmission I’ve seen in vex was all the way back in 2013, by Stanley Shi - so its certainly nothing new. 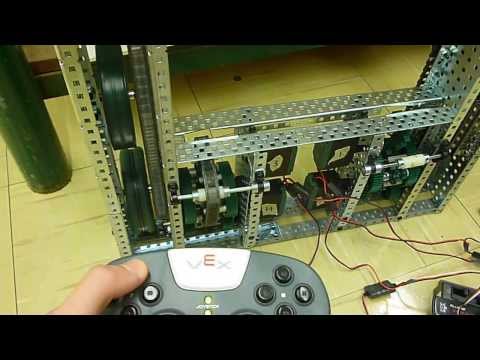 He used a planetary, and depending on if the inputs go the same or opposite direction, the mechanical advantage changes (though I don’t think he coded the IVT part). I know at least one team developing a drive with this chain style of planetary.

An alternative to using chain is a style of epicyclic gearing that uses two suns instead of a sun and a ring gear. The closest I’ve seen to this is before I started working on them is 5327’s spur gear differential, but they used it for power sharing rather than variable MA, and I know another team now designing this style of drive.

Here is one of my cads for one of these transmissions. I’m assuming you’re doing something similar for a nonshifting transmission, and if you aren’t you probably should be.

It is wrong to say you can’t use a multispeed transmission on a holonomic drive, but it’s decently viable if you’re already doing a similar transmission. 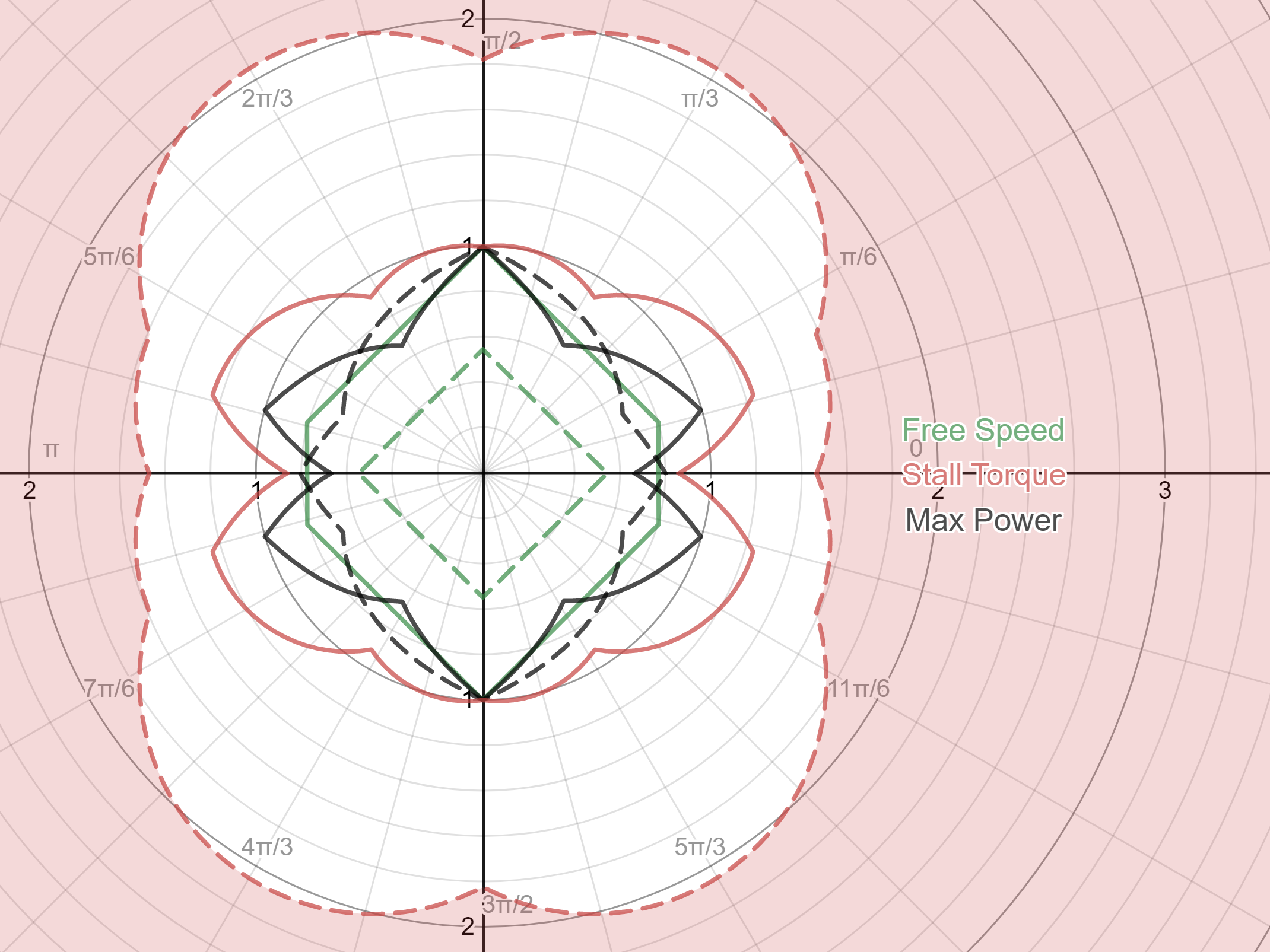 Here is a cad of a 6m multispeed holonomic, and its movement profile. The third motor on each pod loses one direct component of movement (of longitudinal, lateral, turning). In this case it is strafing, but it could also be turning or strafing depending on which differentials you link. A 5m drive would lose 2.

Now this drive may certainly be very impractical, but it is certainly more practical than wasting friction and time on a transmission just to throw your traction away, when applying more force and lower speeds is the whole point of a transmission.

Edit: You pretty much have the stafe wheel location figured out from your original post.

What resources did you use to come up with these designs? Have you ever physically built one?

Edit: You pretty much have the stafe wheel location figured out from your original post.

Also I’m very curios on how you did the non-shifting transmission with the mecanum wheels. If you can point me towards a resource where the concept is explained that would be great.

I think it is possible to have the ability to strafe and turn by having the 5th wheel further back for turning while moving full speed and then while strafing to have the normal facing wheels spin so that it would turn it in the opposite direction the strafing wheel would want the robot to turn. You could also strafe and drive forward/backwards by subtracting the speed the motors need to spin while strafing from the normal driving speeds. It would require odometry to create a reliable version of this but I was already planning on using odometry anyways. So by using this logic the 5th would allow for strafing and turning with a little help from the other motors while strafing. But by also using mecanum wheels and the insane amount of gears your setup would lose speed making it as slow or slower than my design.