I’m working on an X-Drive for this season and was looking into using custom gussets. I’m familiar with cad but not really sure ok how to design custom gussets for an X-Drive.

Can someone provide me with an example on how such a drivetrain would look and how I would cad custom gussets.

Secondly, if you are making custom gussets, are you part of VexU, or are you planning on homemaking them from existing vex metal? You aren’t able to 3D print or custom fab components in the high school division.

In an X-drive, you want to keep the wheels the same distance from the center of the chassis. 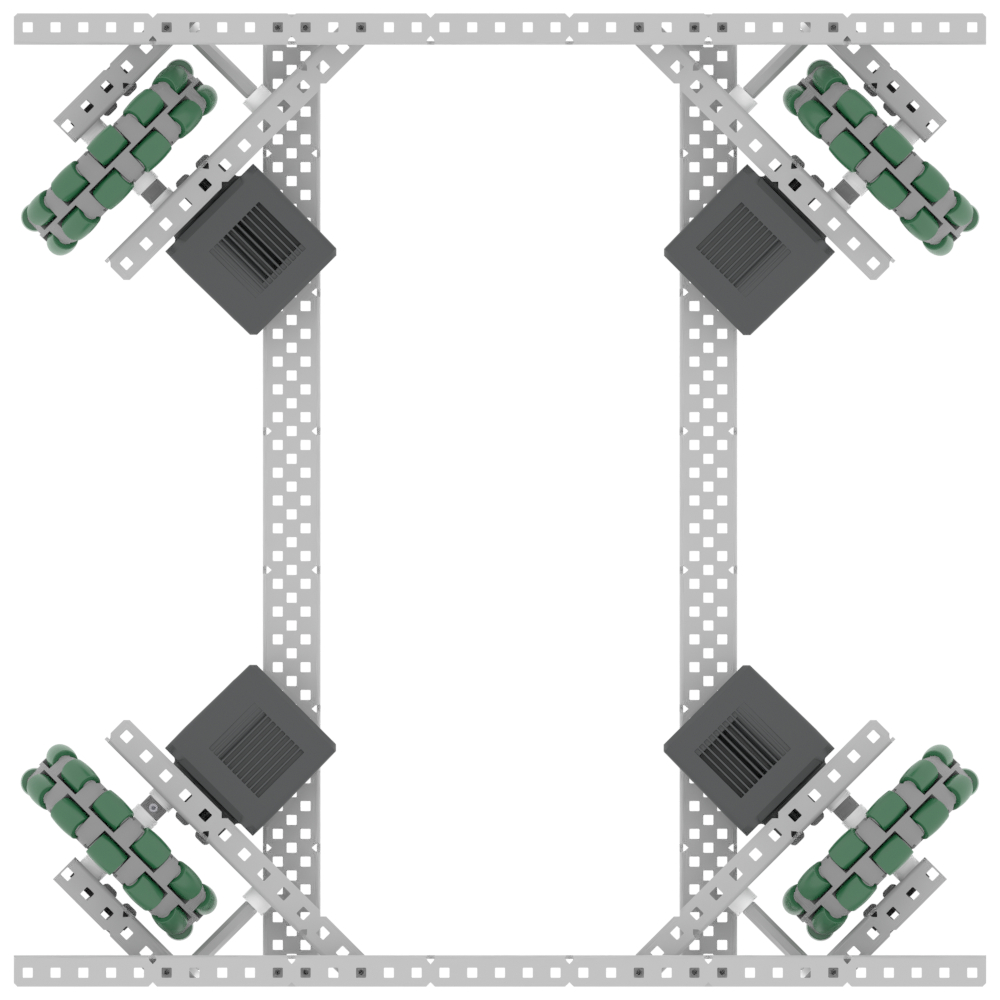 this allows for an easy turn about the center of the robot.

A pretty good example of an X-Drive utilizing custom Lexan gussets would be 5225A from Tower Takeover. They made them through a scroll saw and turned out pretty well. I linked their public photos album below: I’m not sure how Pilons or other teams came up with their gusset design but I just mathed it out on inventor to get each parallel side to be perfectly 17.5" apart so that holes lined up. After that I made an inventor template file of the gusset and printed it out on paper to a 1:1 scale, clamped it to a stack of lexan that had a thin slab of wood between each one, and used a drill press on each marked hole and then just used a Dremel, a file, and aviation snips to shape each one

Could you please explain your math? I’m trying to do something similar to what you just mentioned

You don’t need math. Just place the parts where you want them in CAD and drop a sketch ontop of the assembly to form your custom plates. Place the VEX C-chan such that the distance of 0.5" between centers is maintained. Do this for each “grid”, the grid that is normal and the grid that is 45 degrees offset. Don’t worry about trying to otherwise align the two grids, just make sure the 45 deg offset grid is symmetric to the origin. Doesn’t matter if the corner grids align with each other, as long as they are locally 0.5" that’s fine. You don’t even have to do that if you don’t want to, but you live with those decisions.

Best to only CAD one corner and pattern it. In Fusion, place the parts, including the pre-cut c-chan that goes in the corner at a 45, use the align tool to position things then move them locally in 0.5" increments, make a new component like “Corner Bracket” and start it as a sketch on the existing design. Make the sketch, extrude it and then make the 4 or 8 copies (best to have two plates per side, one top, one bottom) and you’re done.

What to make it out of? That depends on the competition you are targeting or if this is just for funzies. I would CNC 1/16" aluminum, but that’s probably not VRC legal.

Also, it’s better to use round holes rather than trying to replicate the square holes. You’ll have less play. Use the hole tool in Fusion and set it for a clearance hole for an 8-32 thread. If you want a more “vex like” fit, use the measure tool to find the width of a VEX hole and use that as the diameter instead. In general VEX has 0.007" slop on either side of the hole.

If you want to go pro-mode, take the 45 degree c-chan and make sure it’s an odd number of holes, center that hole on the origin, and move it 0.5" out from the origin until you are happy with it’s final position. This aligns the corner grids with a common 0.5" spacing. You will 99.9% likely not need or use this, but your OCD will make you feel good about it.

How do I ensure that the components are corrected alligned. How does the align tool work?

What is the weight limit when using polycarbonate gussets, as surely they will flex?

If the gussets are mostly over metal, and only have small overhangs between sections, flex isn’t an issue and the failure point is the tensile strength of the polycarbonate, which is much higher than the forces you should be dealing with in a typical robot.
I wouldn’t recommend more than a 0.5in overhang if you can help it. The smaller the better. You could even cut the c-channel at an angle on the end if you really wanted to.
Keep in mind I’ve never made a polycarbonate gusset before, so take what I say with a grain of salt.

Over the next 2-3 weeks I’m going to make a tutorial for a middle school team I mentor since they showed interest, so I’ll link that here once I finish. Once you figure it out once it’s really not super difficult, the biggest issue is lining up all the holes with the diagonal. This is by far the best design I’ve seen for an X-Drive, with the only downside I can see being the hole space on the diagonals cannot be fully utilized(can’t put a 1x2x5 on it), but other then that I highly recommend this.

I think plastic is cool, but it might break because steel is stronger than plastic

Are you sure about this? I once sat on a plastic tub and it totally bent. I may not be as heavy as a bot, but bending isn’t very good

You can make it bend but not like flimsy.

Also the force won’t be hitting the lexan perpendicular so it won’t bend also would it be possible to make an x drive with a different angle.

Yes, definitely, you can just adjust the gussets to whatever angle you want instead of 45 and do the math accordingly to compensate. it will drive at a different speed just by changing the angle and keeping everything else the same, so keep that in mind.

Just made the tutorial for it if anyone still needs it. heres the link to the topic post. Custom Gusset X-Drive Tutorial