The age of the catapult!

I just bought a bag of rubber bands off amazon to have a large supply for our Vex room. Those have always been permissible as a ‘non-vex’ component. I guess with the nature of a tossing game they have eliminated that provision and I need to load up on Vex brand rubber bands now.

I am thinking to do a dr4b that has a flywheel launcher on it, with ball intakes in the front.

In the manual it says the highest bar is 15.5 in off the ground, but in the reveal it looks way shorter

I guess with the nature of a tossing game they have eliminated that provision and I need to load up on Vex brand rubber bands now.

“Can we use rubber bands made of different materials” has been an open question in VRC for a long time, with Q&As in various previous seasons leading to different answers.

But in IQ, it’s always been clear that you could use rubber bands made from any material as long as they were the right size - see R8b from the Rise Above game manual:

<R8> Robots are allowed to use the following additional “non-VEX IQ” components:
[…]
b. Rubber bands that are identical in length and thickness to those included in the VEX IQ product line (#32 & #64).

and that rule had been present in various previous IQ game manuals.

But, that provision is missing from R8 in the Pitching In manual – now the only legal “non-VEX IQ components” are non-functional decorations and EDR ⅛" metal shafts. I suspect the motivation behind that change was to avoid the arms race of teams looking for the “best-performing” rubber bands for their catapults, potentially at a significant cost. Seems like a reasonable goal to me.

(sidenote - if you want to go down a rubber band-related technical rabbit hole, read up on high-performance rubber band-powered gliders, the comparisons between different batches of rubber get pretty crazy. This video is a fun watch if you’ve never seen them before.)

Now, a further complication – buying rubber bands from VEX can get expensive quickly, but you can buy the same rubber bands from other sources at a much lower cost. For example, the VEX “non-latex” #64 rubber bands (276-3990) are Alliance non-latex rubber bands. Buying the 10-packs from VEX, they run about $0.40 each, but if you buy a 1lb box from Amazon, you’ll get the same bands for about $0.03 each (and that’s more expensive than usual, the 1lb box is currently $10; last time I looked I think it was $5).

So - if you buy the same rubber bands from a different source, are they legal to use on your VIQC Pitching In robot? In previous VRC games, they answer would definitely be “yes” - there has been a long-standing rule in the VRC manuals that allows “any parts which are identical to legal VEX parts” to be used. (Actually as I was writing this I noticed that rule is missing from the new VRC manual – but that’s another topic, probably worth its own thread)

Anyway, in IQ we’ve never had that exception so we’re bound only by R7a:

a. Official VEX IQ products are ONLY available from VEX Robotics & official VEX Resellers. To determine whether a product is “official” or not, consult www.vexiq.com.

But in this case the assertion that “official VEX IQ products are ONLY available from VEX Robotics” isn’t really true, since you can get the same part from other sources – not just an “identical” part for some definition of that word, but literally the same parts, just routing through different warehouses on the way from the factory to your robot.

I think “can we buy the same rubber bands from Amazon” is a good question for the Q&A when it opens.

I had bought these last month to fill our rubber band bin, same size and were within Rise Above’s R8>, but as you stated no longer in the new game exception.

They never even made it on a robot!

Thanks! I would hope/expect that this was an oversight and will be addressed in a later revision of the manual. I think it’s reasonable to prevent people going way in-depth about different rubber band materials but requiring people to buy rubber bands from VEX when they could get the same bands for less than a tenth the price elsewhere seems less reasonable.

I think a specific allowance for buying the Alliance non-latex #64 bands from other sources (plus the OEM parts of the other “VEX-brand rubber bands”) would be a great correction.

Or heck, VEX could sell rubber bands at bulk quantities/prices rather than just 10 or 20 at a time, that would solve this problem too.

Can’t Wait!!! This is going to be a really excited challenge!

Just noticed the center goal is Installed by sliding in on rails and then locking in to place. May make it easier for EPs to disassemble and move fields. 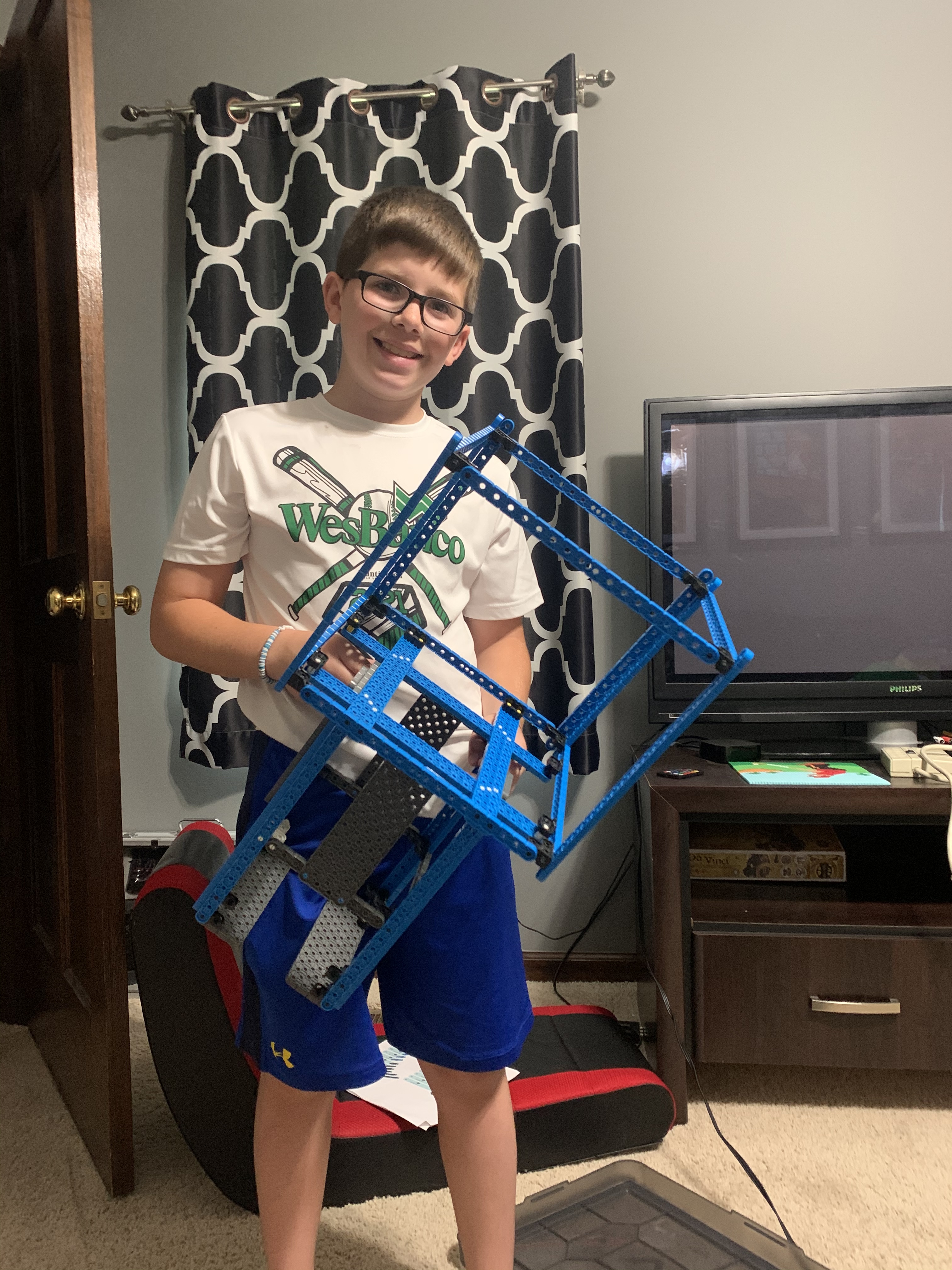 The goal is BIG. This is our temporary goal from spare materials

Dang that thing is huge. You can fill it with Squared Away balls because they are about the same size.

You can fill it with Squared Away balls because they are about the same size.

An additional note on this. Squared Away balls are not only the same size, but the exact same weight as the Pitching In balls. I am not sure exactly what the specifications on the balls mean by “padded” and that they are filled with “stuffing” though. If anyone does get the game kit, particularly the official balls, I (and I’m sure others on here as well) would appreciate some details on them.

Looking at the pictures, the Pitching In balls look to be made of a leather-like vinyl material with stuffing inside. In other words, they will probably be at least slightly ‘squishy’. This makes sense, considering they are expecting them to be shot around; a soft lightweight ball will hurt less when it hits someone (which will probably happen quite a bit…)

Honestly they remind me of the balls I used to play with in Elementary School (with a parachute) but without the beans inside. Honestly this game seems kinda easy because there aren’t that many balls on the field. I think there will be a good deal of teams that max out driver skills by worlds

And reset the field every match if you can’t reach like me.

I noticed that slide but was thinking it made it travel friendly for EPs. I am sure that the Vex warehouse crew must be bored today and wants to ship out game kits to forum users first! Can’t wait to get our sets!

As well here’s a bit of a demo of the balls to get an idea before kits ship out. I was gonna rip one open but it’s just like stuffed animal floof on the inside. It’s like a hacky sack with soft fluffy insides!

It’s like a hacky sack with soft fluffy insides!

No flywheels, I guess then.