quality rubber bands are so worth it. also check for anything that could be rubbing the bands while it spins.

To prevent rubber band chafing we zip tie the bands away from the axle. Might be worth a try.

I’ve also seen teams use screws through the sprocket in the innermost ring of holes to keep rubber bands off the axle.

They are the robosource ones and firm stretch.

Our top roller on the snail bot has one rubber band breaking each test cycle.

If your top roller is really close to the goal, it could be because the rubber bands spread outward when the roller is spinning fast which would cause them to scrape against the goal rim, the underside of which is really sharp for no reason

“VEX brand rubber bands” are repackaged Alliance non-latex, so, reading things literally, no, rubber bands made from other materials would not be legal.

But, a Q&A entry from Nothing But Net ruled that rubber bands made from other materials were OK as long as they were “close in elasticity”.

But but, a more recent Q&A entry, this one from Turning Point, suggests that rubber bands do need to be made from the same material.

(Note that previous season’s Q&A rulings do not automatically carry over.)

But the real point here is that last sentence in <R6d>:

It is up to inspectors to determine whether a component is “identical” to an official VEX component.

If an inspector really wanted to, they could perform some sort of “elasticity testing” on your rubber bands, and if they determine that their elasticity is substantially different from the VEX bands, they could potentially fail your robot for that reason. But I’ve never heard of anyone doing anything like that, and think it’s pretty unlikely that anyone ever would. In pretty much all cases, the inspectors’ procedure for determining whether your rubber bands are “identical to legal VEX parts” (if they perform such a check at all) will consist only of checking their size.

I’d only add that I assume the (albeit remote) possibility of being called out on rubber band material type as an issue likely increases with the size / status of the event. Probably little (to no) concern at regular local events, only a bit more at Regionals / States events, and the most at Signature Events / Worlds.

My recommended “test” - if a random-material rubber band is genuinely giving you enough benefit over a non-latex one that you feel it would be a huge detriment to the robot if you had to suddenly change to all Vex ones… then you should probably start considering that those replacement bands may not, in fact, be functionally identical and SHOULD fail inspection (whether they do or not).

1lb for multiple seasons worth?! WHAT?!! I’m going to have to go have a talk with those kids… [stomps off to ask team where all of the rubber bands have gone]

Ha - maybe I should ask my team why they’re not using more rubber bands!

Here’s an image. Ignore the colors since we just happened to have different colors and I tried to make a pattern. 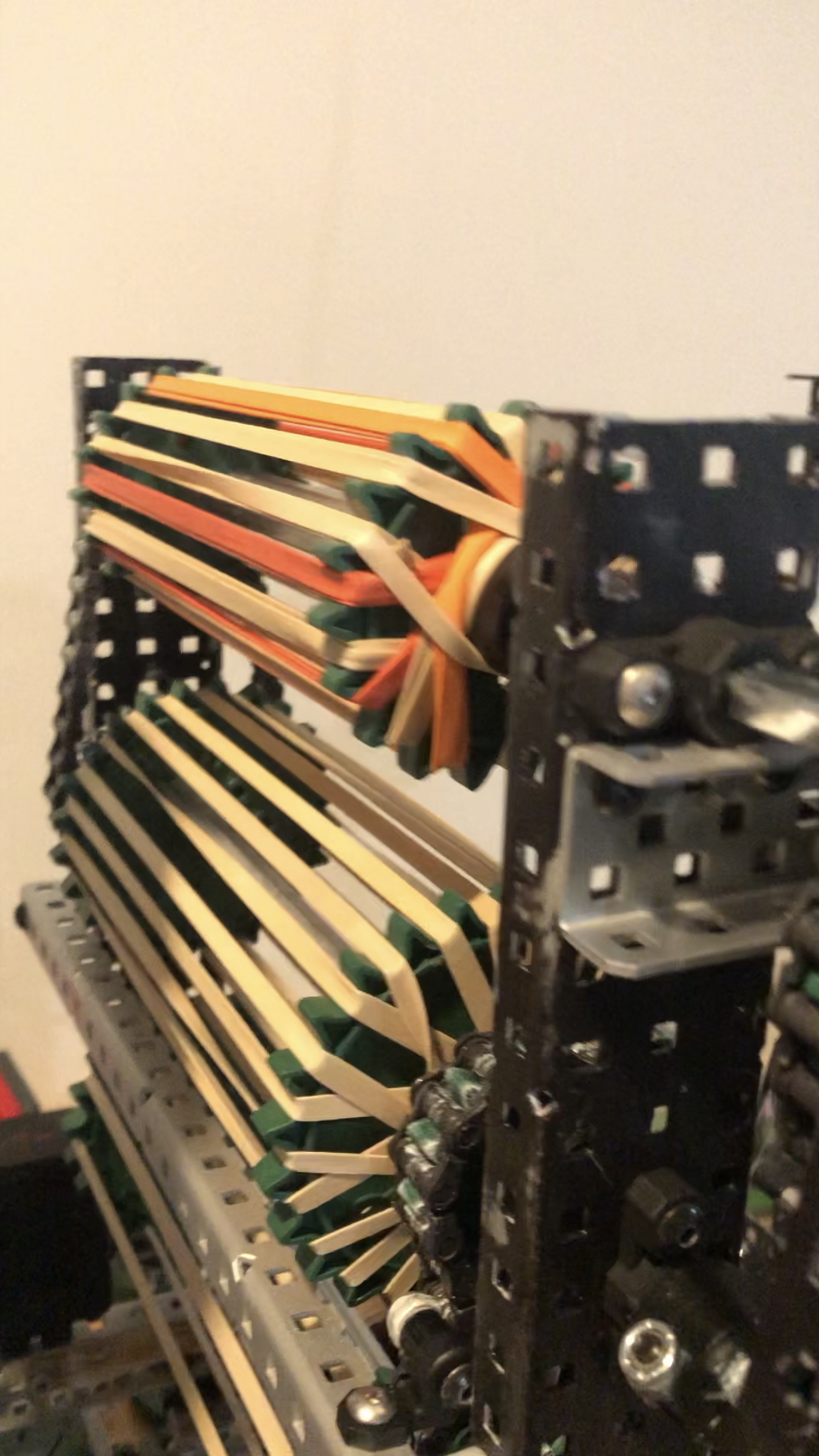 That’s a rather small flywheel you got there.

This is a pretty stupid question but what’s the formula for rpm in vex? The calculators I’ve found are all for engine rpm

RPM, or, revolutions per minute, is a measure of angular velocity, ω. If I was feeling a little snarky today, I would tell you that the equation for RPM was revolutions/minutes.

Alas, angular velocity is defined by the equation P=τω and ω=v/r, where P is power in watts, τ is torque in newton-meters, v is velocity in meters per second, and r is radius of the rotating body in meters. As you can see in the τω expression, torque is inversely proportional to angular velocity, when considering a system sustained with a constant power P. With a little bit of algebra, you can also note that P=τv/r, which implies that as radius increases, the torque must as well for the same unit of power and linear velocity.

The implications of the inverse relationship between ω and τ are found pretty often in vex with gears. As you increase the radius of one input gear relative to its meshed, driven partner, the angular velocity of the output increases by the ratio of the sizes of the gears- while the torque decreases by that same factor.

So, simply put, the formula for rpm in vex is i can’t do this anymore
rpm = revolutions/minutes you’re welcome

that is possibly the worst way to measure rpm lol.

if you know your motor rpm and your gear ratio, you can figure out the output rpm pretty easily. just multiply the motor’s rpm with the gear ratio.

Yeah but it’s fun. ButI’ve been told that it looks nice when properly explained and demonstrated in a notebook. It’s not efficient but it works.

I’m not exactly sure but I feel that wouldn’t be enough room to get enough compression on the ball thst you would want.

Explaining and doing the math is probably faster and more impressive on a notebook than using a bad and inconsistent method.

Calculate the rpm by multiplying motor output by gear ratio. If you want to know the tangential velocity, convert rpm to radians per second, then multiply by the radius in meters.

To convert rpm to radians per second, multiply the rpm by pi then divide by 30. This can be some good content if you can prove the math on notebook.

For example, if I want to calculate the linear (tangential) velocity of my drive, which is 257 rpm on 4” wheels, I’ll do the following: