Hey! North Central Florida team formely known as 8471 rebranded as 5842. This year, we decided to step things up a little and cad our robot before building, we prototyped all of these mechs before hand so we know theyll work. no string shooters have been cadded yet as this software made it a little tougher to cad something so specific as that. We wanted to showcase our robot before hand and we will be posting a reveal video sometime in the next month or so. Questions comments and concerns are all welcome! GLHF
(edit: i messed up one of the picture uploads lmao) 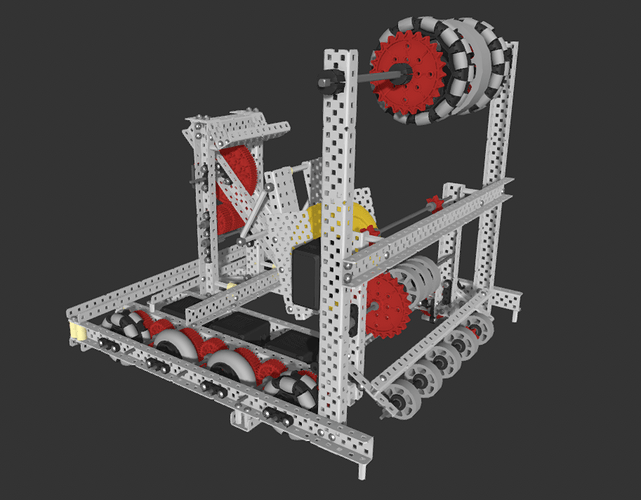 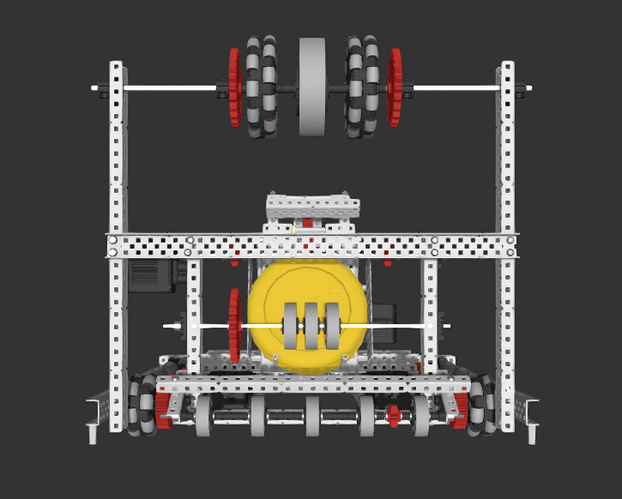 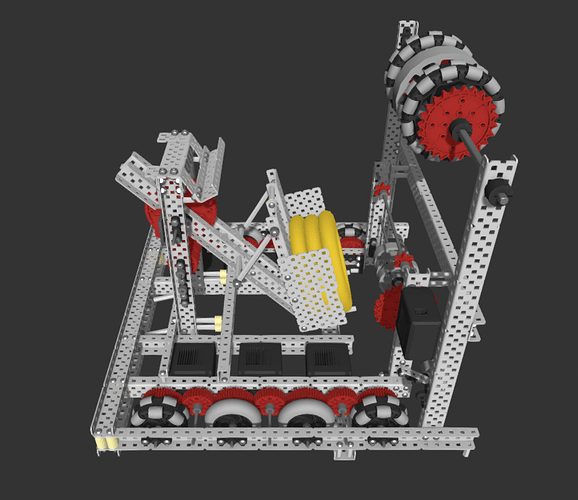 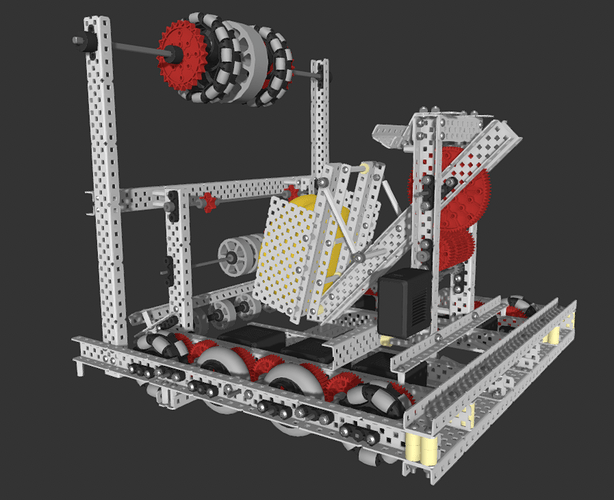 Did you have any difficulty turning with two traction wheels on each side of the chassis?

surprisingly no, it was definitely something to get used to, as it isnt centered, but it drives the same as a full traction wheel drive with the turning mobility of a omni wheel drive.

might consider triangulateind down to the base from the tower

Either that or four post thingies (whatever their official name is) because the way it looks like you’re doing it with four screws will not be toleranced, and there will be a little room to shift. But yeah, triangulation is good. especially with so much space left over.

Wow! That looks a lot like our robot right now, besides the fact that we have 3 omnis on both sides. However, I very highly recommend using high strength shafts on the intake and at least the shaft with the 60T gears on it, because our shafts were extremely bended when pulling the catapult back. I’m not able to tell if the CAD has high strengths, but you should definitely consider the switch. 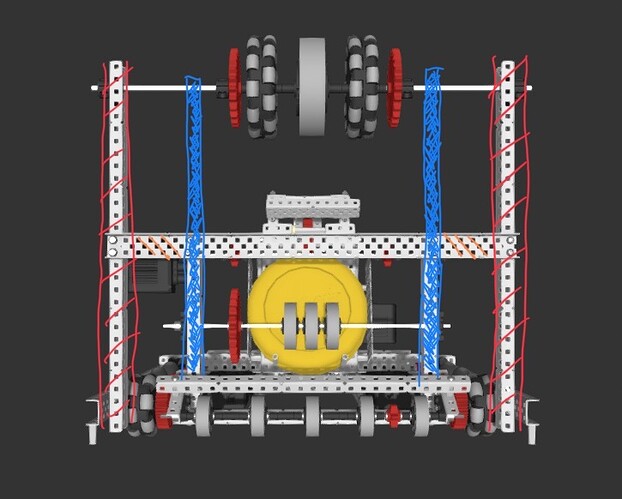 a19ca1cc4c4eb7ccb620c14c278d3a3ee64f2ce3725×582 76.1 KB
I might be missing someone obvious here, but why setup the c channels like this? removing the two on the sides and extending the ones that already exist. Keeping them closer together will help the high strength axle flex less.

Along with this, you should also look into adding triangle bracing on these c channels regardless as other mentioned before 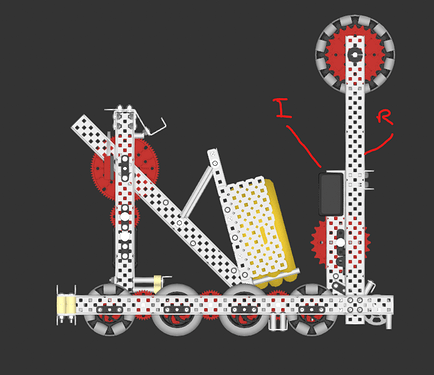 Overall I like it and agree with what everyone is saying, but I’m wondering, what CAD software you’re using?

That cad software is known as protobot, and its designed specifically for VEX.
Most people use it as an introductory software before delving into the more advanced ones, such as Inventor or Solidworks.

Okay. Rn I’m also using Protobot but was thinking of moving to Fusion 360.

I recommend Inventor over Fusion 360, but either are better than Solidworks in my opinion. Frankly, easy to import and use libraries are a key piece of CAD, and I’m almost tempted to use Protobot again because it is catered to its specific needs. Inventor is better overall, but for VEX, it takes a while to get used to.

I see, eventually I’ll probably try everything and choose off of personal preference.

You must have more time than me

Good luck on your quest!

How did you make this? I would like to make a 3d model of my robot but I can’t move any of my imports in onshape. Also this is a very good robot.

This software is protobot, it is a little finicky, but it is quite nice

one thing you could have done to still avoid those outer channels that form the roller mech towers is if you extended the shorter inner channels, and then just mounted the roller mech off the front spaced the same with standoffs or pillow bearings or some combination.

What’s the point of the flex wheel in between the omnis on the roller mech? It won’t actually touch the roller, the diameter is smaller.

Also, I’d recommend having only 1 traction wheel in you drive, 2 will add turning scrub (although it probably won’t be terrible if they are that close together).