I made a bingo card for next year’s vex game. any ideas for things to add/ change?
We ran out of ideas at the end so some of the tiles should probably be merged. 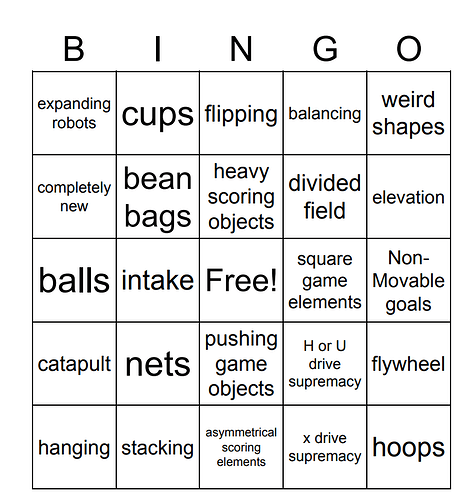 Thanks teams for adding more work for EPs

I feel like expanding robots should be changed a little, because robots will kind of expand no matter what.(unless it is something like a pushbot)

We could make that the free space

Yeah. expanding robots meanto to be like robots that expanded at the start and never went back down like the traybots from tower takeover. but that’s one of the ones that i think should be changed the most

No omnis should be the free space😂

Oh, makes sense I thought might be what it meant

I would say replace weird shapes or free with video replay and replace the other with Omni wheels.

Both of @BobbyfromJamaica and @lacsap s ideas.

Bingo! (Made before the post) [Bingo] Prototype Quick wall concept base level design (far from full) besides the obvious stuff like using boxed steel, having boxed joints, flip out anti-tips, using locked omnis instead, etc I don’t know why I thought this would prevent structural integrity posts

So if your home goals are not filled completely a lift or a snail could score over that wall. Step 1 in the strategy is to finish the home row. The only issue I see is…

Sorry for late reply.
Could you elaborate on what you mean by video replay?

No omnis should be the free space😂

Locked Omnis should be the free space. I have never seen so many Locked omnis wheels this season. I even have one team with all four wheels being locked. “They have more traction than the regular wheels” /sigh

Rule T1b reads: Head Referees may not review any photo or video Match recordings to determine a score or ruling. To start off, I would like to say that I think in general, rule T1b is a good rule. I think that it can save a lot of time at events and make things run smoothly. However, this year is probably the hardest year for referees. In addition to normal rules like trapping and entanglement, referees have to watch for SG3, SG6, and SG7 violations. This year, there are probably more cases …

Currently T1b prohibits refs from looking at videos (video replays) of the match to determine calls.

Why would y’all be fighting to add a bingo space that is guaranteed to never be filled by anyone?

"They have more traction than the regular wheels” /sigh

They do… The flex wheel tires have even more, but the 4" Traction Wheels are notably non-tractiony.

Any science to back that up? I love being wrong about things…

Why would y’all be fighting to add a bingo space that is guaranteed to never be filled by anyone?

Yep, I’ll bet a V7 kit that there is a water game before video replay becomes a thing.

And no, I don’t have an inside track to DanMantz that based on the success of the drone program the 2022-23 year will see the launch of the Submersible Contest (RADAR) (RECF Aquatic Demonstration Autonomous Robotics) ™

Any science to back that up?

I didn’t include Mecanum wheels as I knew that they wouldn’t be a good choice, but in terms of staying on platforms (which is an important part of this years competition), which wheels do you guys feel have the edge? Omnis or Traditionals?

Awesome, thanks. I knew there were some science experiments, thanks to the link back to @holbrook link to the test.

The free space should be JANK.

They do… The flex wheel tires have even more, but the 4" Traction Wheels are notably non-tractiony.

I have actually found that they have a decent amount of traction on foam tiles with a very heavy robot (in fact, the surface of them actually left some temporary marks in the foam tiles when I left the robot on them overnight.)