So the way I thought about this at first was that the robot could expand from an 18" square into an 36" square, horizontally, as seen below. 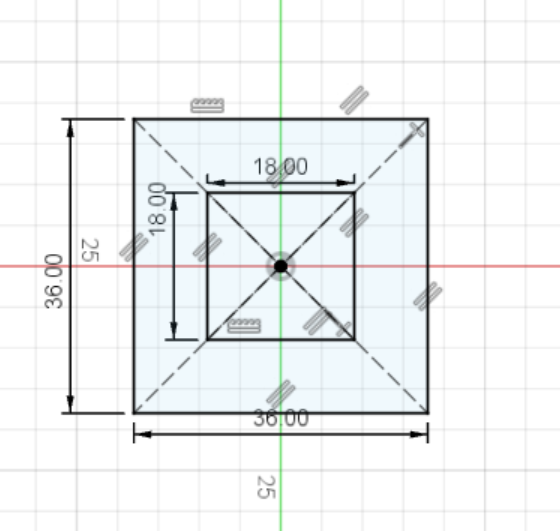 However, The line that confuses me is when it says that

no horizontal dimension can exceed 36” (914.4 mm) at any point during the Match.

As the diagonal of the 36" square is about 51", it is much greater that 36". In that case, then, the robot greatest that the robot could expand to is a circle with a diameter of 36 inches. 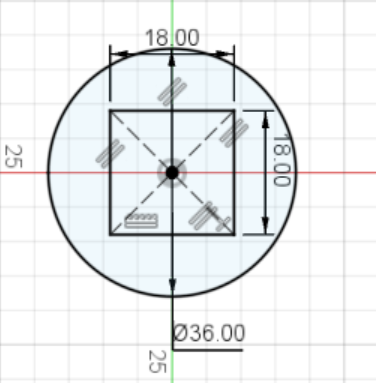 That means that the greatest size square a robot could expand to is about 25.5
inches: 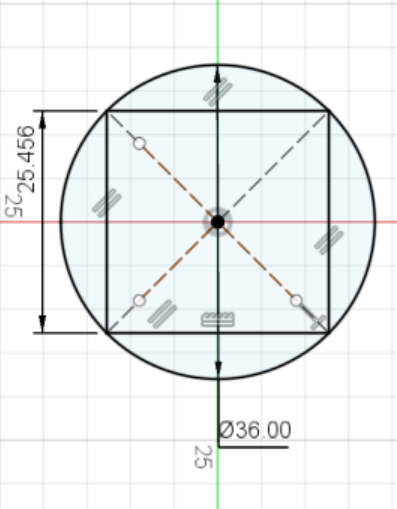 Can I get some clarification on whether this is the case, of if I am just overthinking it?

Your 36" diameter circlular concept is correct (but review the CAD sketch below). The referees will check expansion with a 2-point expansion checking tool: On-Field Robot Expansion Sizing Tool - VEX Robotics

Here’s a Sharpie-CAD sketch that shows how the referee will inspect. 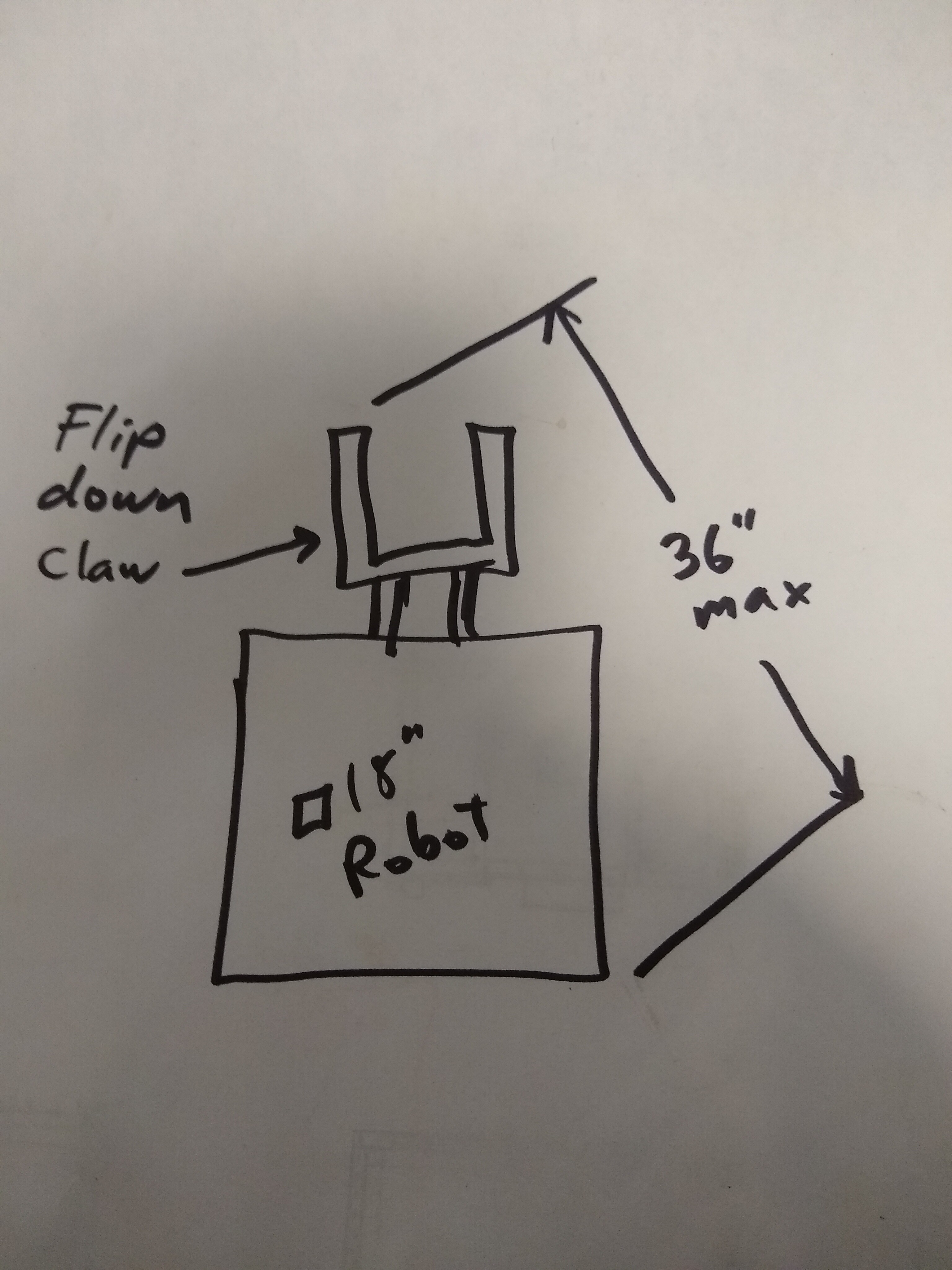 This is wrong, it’s actually a reuleaux shape, not a circle.

Just think like this: No two points on the robot may exceed 36 inches horizontally, as seen in the picture by @kmmohn . No need to make things complicated.

No need to make things complicated. 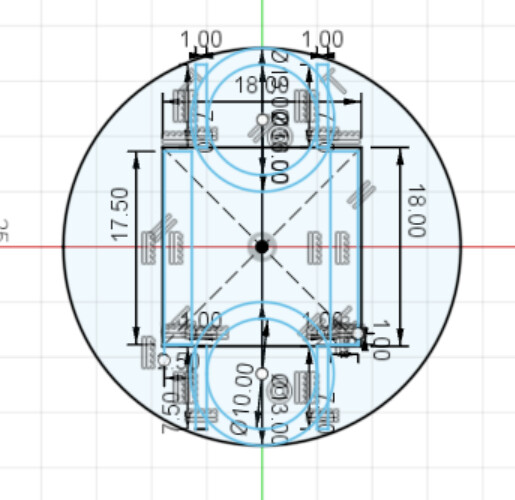 In that case, then, the robot greatest that the robot could expand to is a circle with a diameter of 36 inches.

Once the Match begins, Robots may expand, but no horizontal dimension can exceed 36” (914.4 mm) at any point during the Match.

There is no mention of a circle in this definition, because the expansion limit is not (necessarily) a circle. For example, let’s think of a simple shape, say a triangle with sides of length 36", that does not violate this rule but would not fit into a 36" diameter circle. Here is such a triangle superimposed onto a 36" circle: 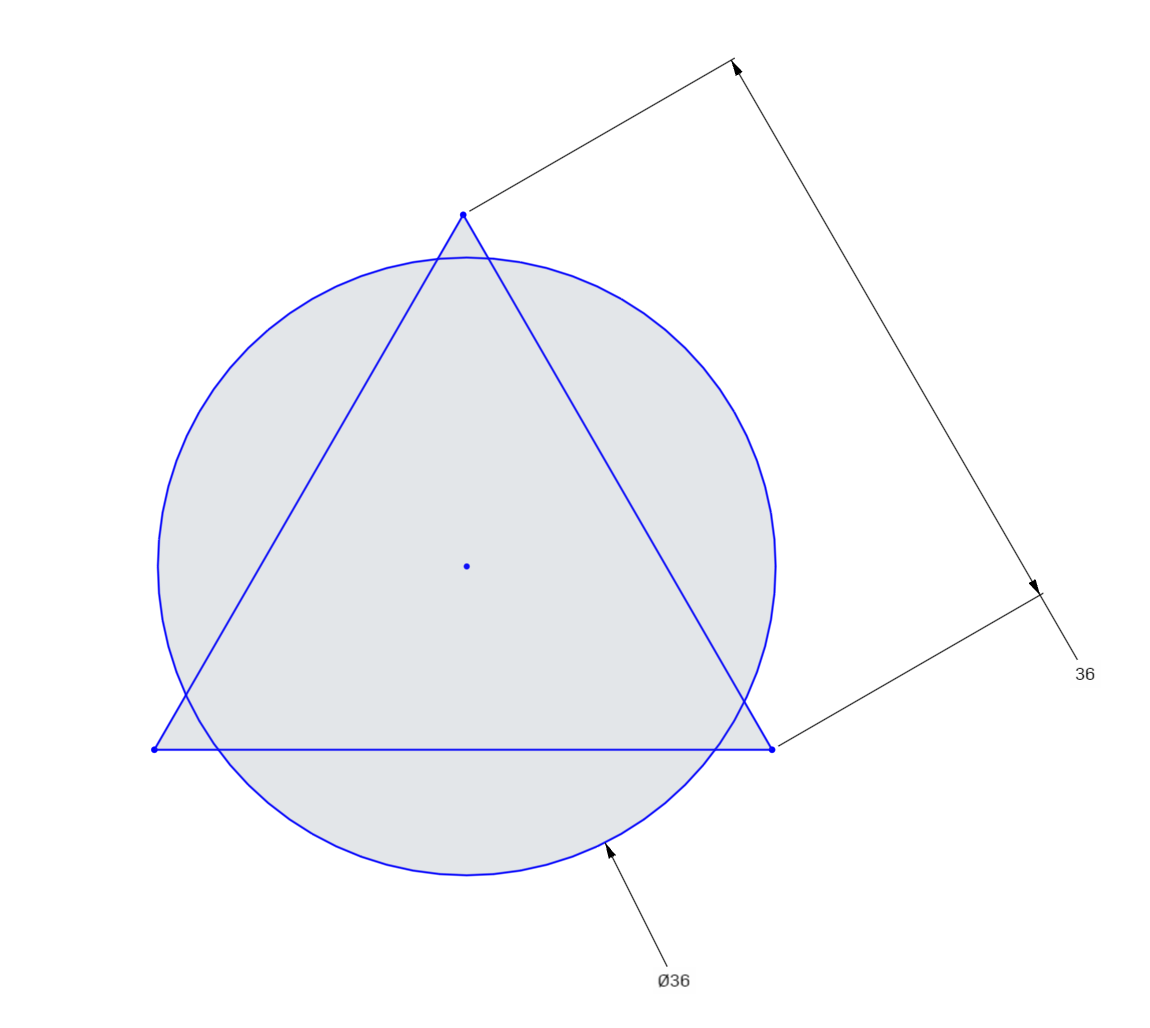 We can also draw other shapes that abide by this rule but do not fit in a circle, such as this reuleaux triangle: 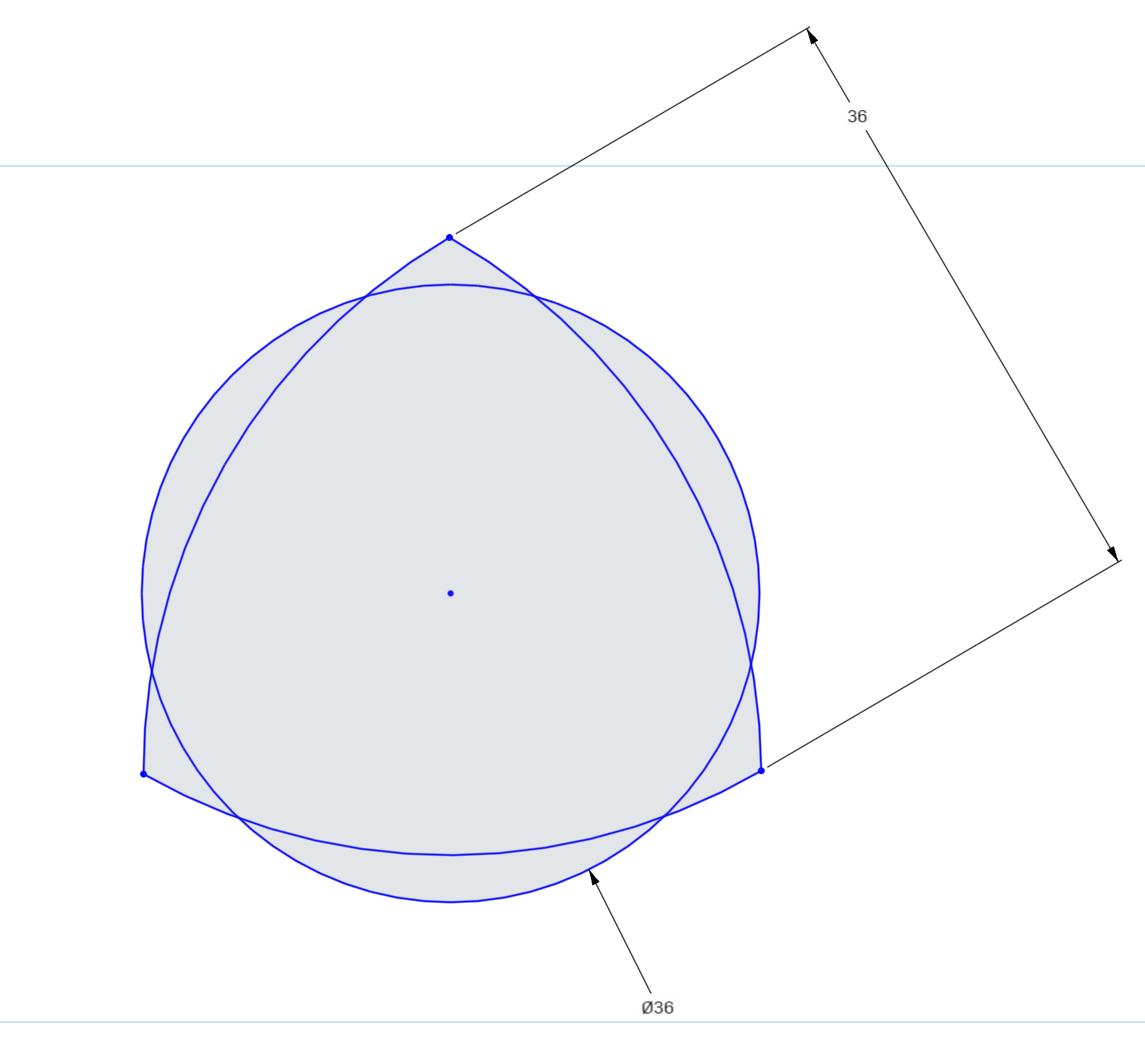 These shapes abide by the rule’s requirement that no two points on the robot my measure more than 36" apart, while not fitting within a 36" circle.

Why would the GDC do this instead of a circle/cylinder, you ask? Because a circle/cylinder would be nigh unenforceable. Take a triangular robot for instance that barely fits inside a 36" diameter circle: 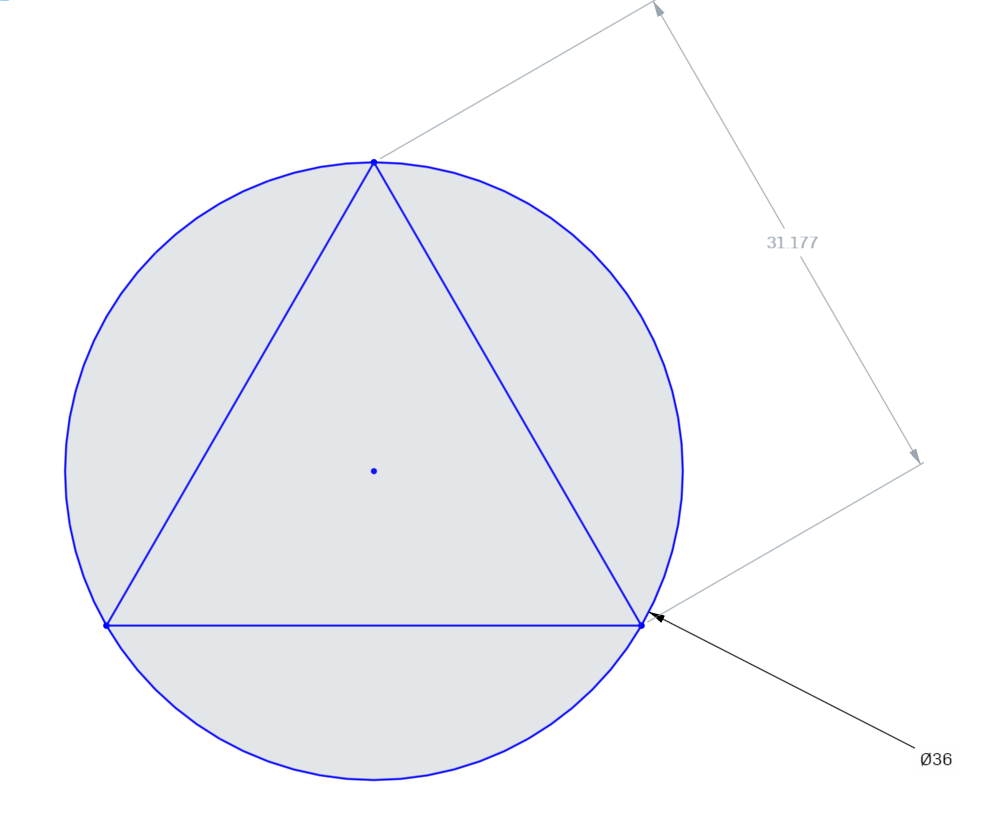 As you can see, despite only barely fitting within the circle, the largest distance between any two points is several inches less than 36", 31". Say we increase the size of the robot a bit: 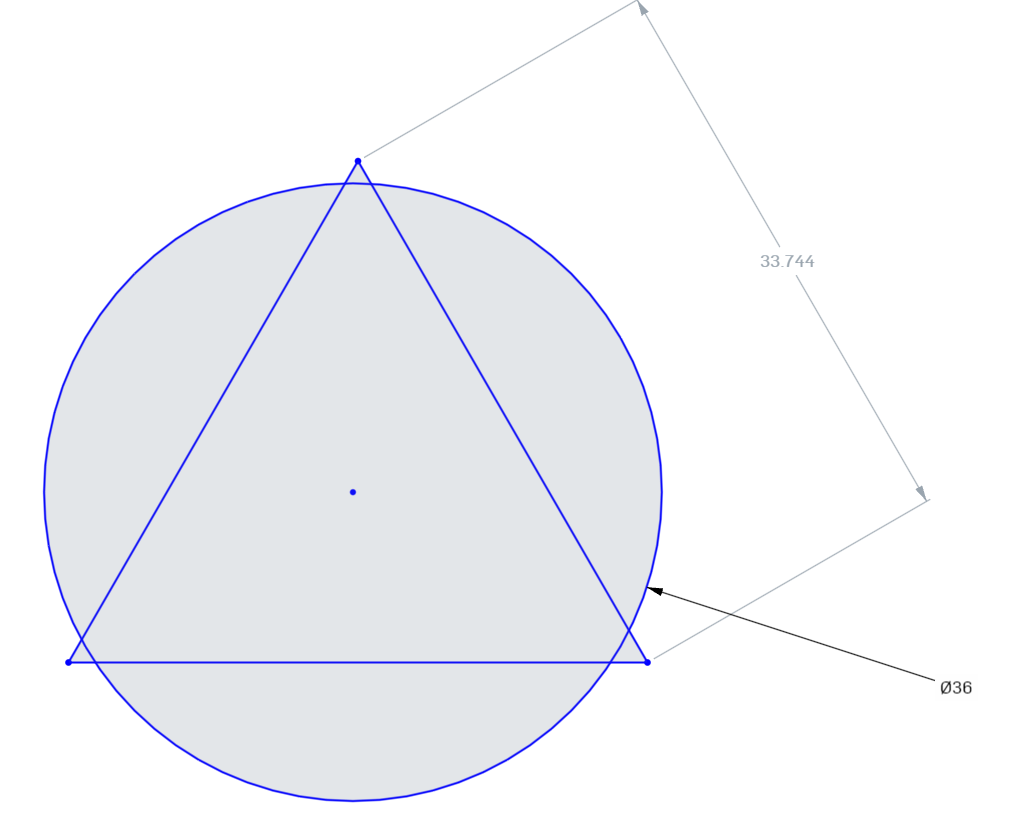 Now our robot is sticking out of the 36" diameter circle (illegal if that’s what the rule said), but if a ref takes their 36" sizing tool and measures the robot, it will still seem to be more than 2" under the limit. Ultimately, we see that if the limit were actually a circle, it would be impossible to use a linear form of measurement to determine legality, and instead every robot would have to be sized using a large and impractical 36" circular box. In fact, back in ITZ, the rule originally specified a 36" diameter cylinder, but was changed to the current wording for this reason. The current wording is actually enforceable with a simple stick.

but if a ref takes their 36" sizing tool and measures the robot, it will still seem to be more than 2" under the limit.

Right, in the end, this is what is important, and all that will be used to measure expansion.

Furthermore, the inspector will look at the case that multiple appendages/arms/manipulators could extend, which , if extended at the same time might break the 36" rule, but if only extended one-at-a-time would be OK. The inspector would question if there is “software control” over not extending more than one appendage (hopefully), but also inform the other referees to keep a close eye during the match for that particular robot.

I think it’s important to be precise and not misleading, especially for rules like this. As @VexTeamZ showed, some teams may misinterpret the rule to be talking about a circle, and may design their robots in CAD accordingly, restricting the design of their robots more than is necessary. It is important that we use correct terminology and interpretations in order to avoid this.

how about if I expand two claws alternately, however each claw will not exceed 36inch. 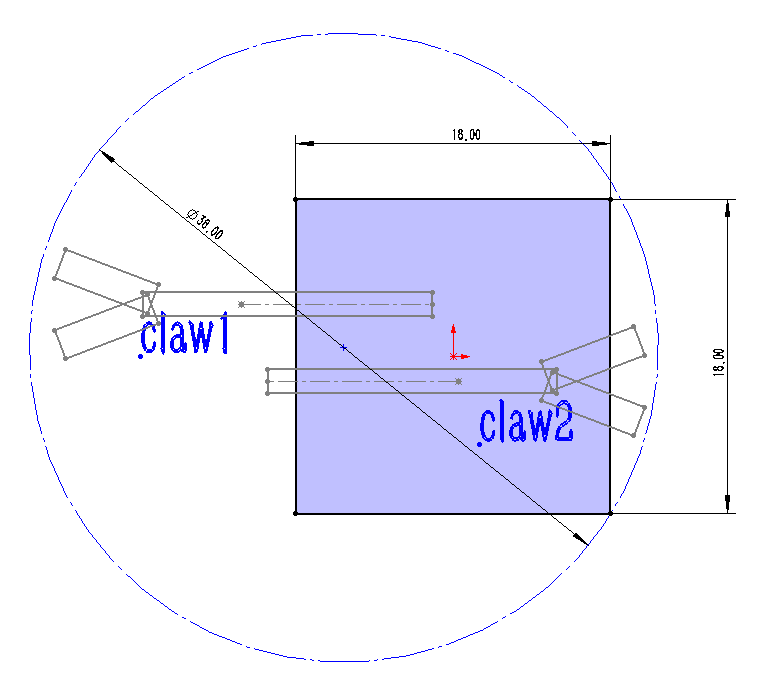 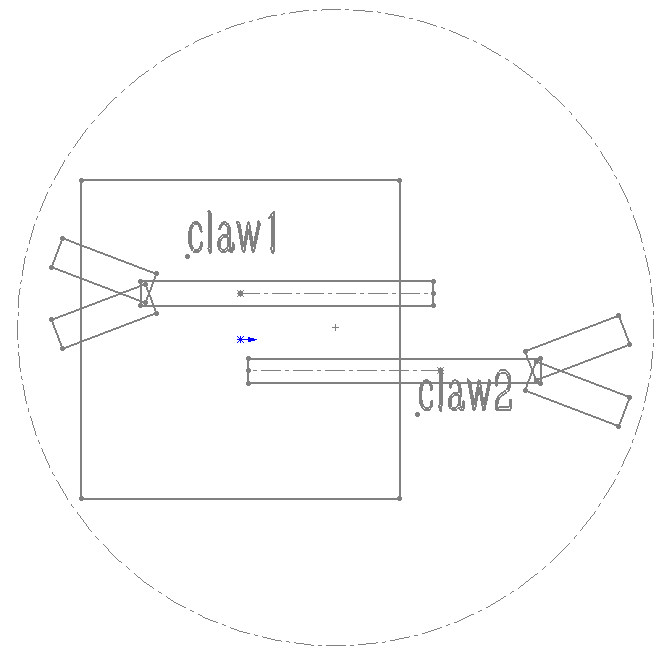 That would work, but the referee will be watching very closely. I’d suggest some code and limit switches to prove at inspection that they both can’t extend at the same time.

So with the manual update specifying this rule, I just wanted to make sure that I understand everything properly. (I am sorry to revive this thread but I didn’t want to create a new one for my question).

So, when the manual uses the “point-to-point” wording that means that as illustrated below the measurement can be measured on a diagonal correct? I tried to illustrate what I was thinking with this drawing: (this is to scale) 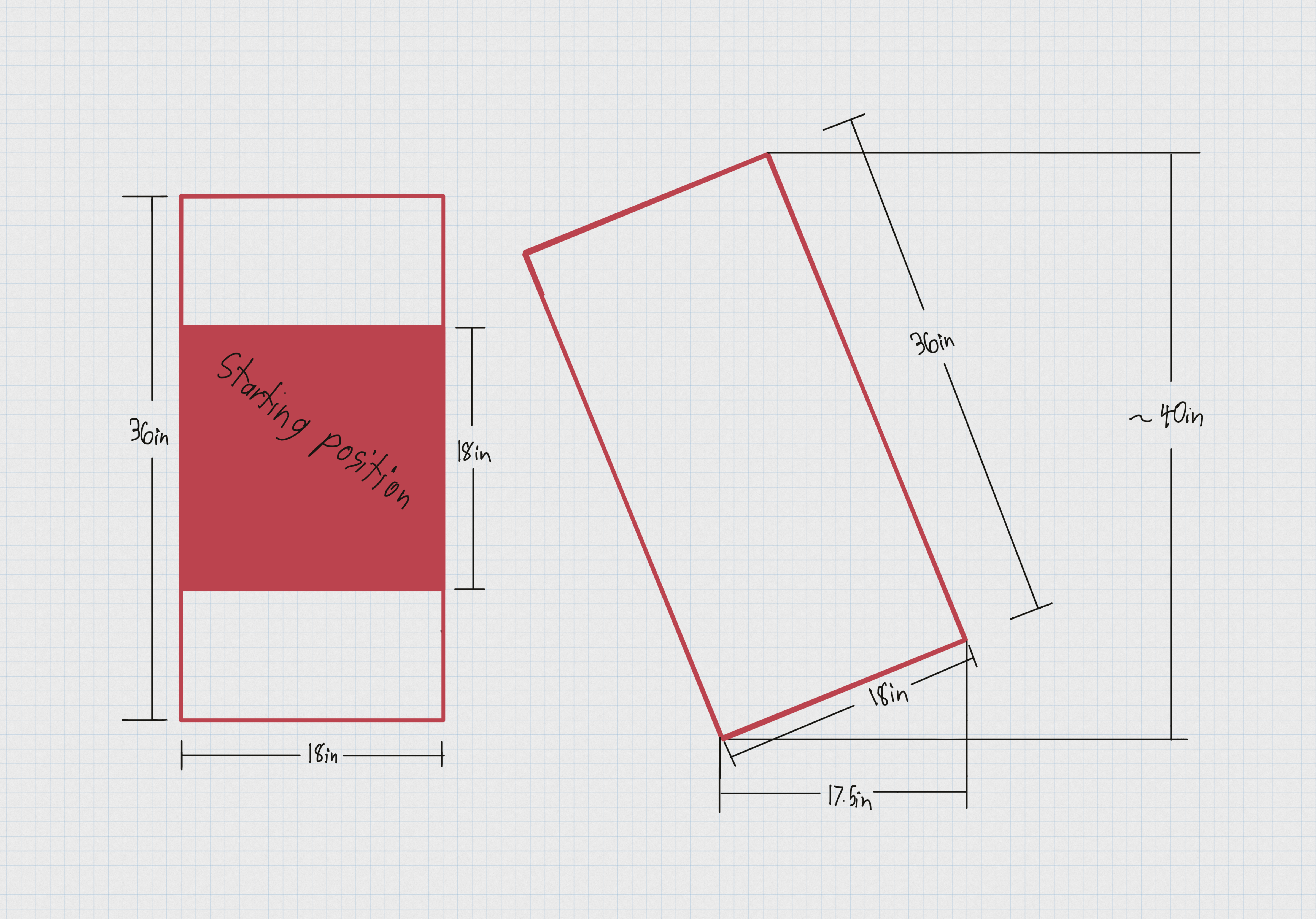 If I understand correctly both of boxes would be out-of-size because if you take a point to a point (as illustrated with the rotated box) the resulting dimension is greater than 36 inches. Is this correct?

Also, am I reading the rule correctly that a robot that has tipped over while expanded pass 36 inches would be in violation of this rule?

yes, you are correct in all of your interpretations

the best way I can phrase it is that no two points on the robot can be more than 36" horizontally from each other.

so yes, it seems your interpretation is correct.