Hey everyone, I’ve been playing around with a program that builds rectangular buttons onto the V5 screen and I think it has turned out pretty nice. I initially made it to make it quicker to build our autonomous selectors, but the more the program expanded the clearer it was that it could help make a lot of projects simpler and faster (though not necessarily for use in VRC). As a result, I’m releasing the code for anyone who wants to use it. disclaimer: Right off the bat, know this program has…

I am currently using blocks

The link you gave was about text.

The same coding applies to blocks. (That is, unless there are no blocks for printing to the brain. In that case, just switch to text.)

These are the display blocks

@4869Robotics Boom there they are.

Um uh could you explain how to do it with blocks? I don’t see something like a “When button pressed” block.

This is an example code (in blocks) which makes a button in the upper left hand corner of the brain screen and senses when the button is pressed:

Ok, I have 3 auton routines. Would it look like this: 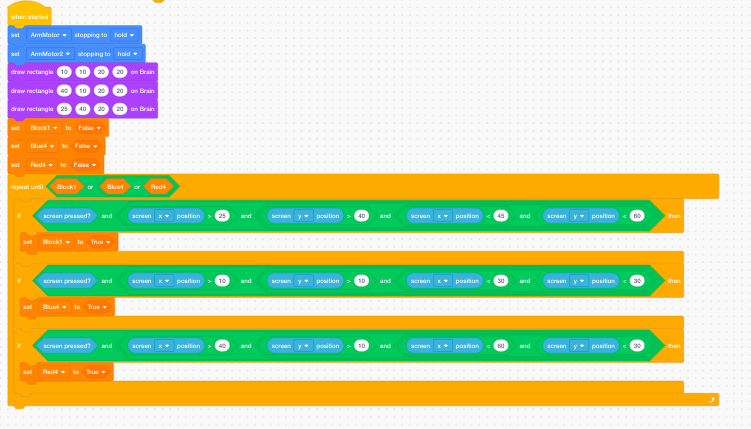 Please tell me if the numbers are wrong.
Also where would the actual auton code go?

Were would the auton code go?

i know this thread is older but i just got around to playing with this code. Can you give me an example of were the autonomous would go because i cant find anything.