were having a tournament for fastest car… any tips?

Constraints are: 3-4 wheels and 2 motors
No turning just speed

what constraints do you have?
limited number of motors? limited parts? size limit? weight limit?

what exactly does your car need to be able to do? is it a straight line race, with no turning needed? does it need to complete some sort of obstacle course that does involve turning?

Does it need to be able to turn?

Welcome to the forums

What type of motors? I am going to guess V5 as it is in the v5 section but as you are new to forums i think it would be best to ask.

Also, do you need to use vex equipment? Directly wiring together DC motors would be lighter

yes its v5 motors we will be using

Does it need to turn, or just go straight?

By fastest I’m assuming its a drag race? If so, its all about having a balance between how quickly you can accelerate, and what your top speed is, or in other words, how high a ratio you should gear the motors up.

Also, you want to be as light as possible, and if possible use 3 wheels

in that case, your best route would probably be some sort of dragster.

having a single powered wheel, and two unpowered wheels (like a tricycle), will offer you the simplest straight line vehicle. With two motors your speed won’t be insane, but you can get pretty fast. gearing your motor up so your wheel spins at a very high rpm will be your best method of speed increase, but if you gear it too high, you might have issues with the car stalling or having unbearably slow acceleration.

you’ll want to build as low friction as possible to have little power loss, and you might want to keep it lightweight as well, though you also don’t want to lose traction with the ground.

you’ll have to balance speed with acceleration though, because the faster you

Yea right now i currently think im going to have two wheels in the back both with independent motors and a free wheel in the front. Ill think ill put and the battery and brain over the whole thing with a thin pice of metal. the frame will be four c brackets for weight

another more fun and adventurous idea is that if your bot starts up against a wall you could build a rubber band sling shot thing: Taran’s launcher thing

Here’s a dragster I made a week or two ago. The chassis was just two c channels and two standoffs, plus a few standoffs for mounting the brain. With a 7:3 ratio, and 200rpm cartridges in the motors, it has a wheel rpm of 467, and has a theoretical top speed of about 8.14 feet per second. As you can see in the video, it reached it’s top speed fairly quickly, so if it was racing a longer distance it might be worth increasing the gear ratio to give it a higher top speed. Ultimately, I’d recommend testing different gear ratios and speeds so that you can find out which one works best. Also, make very sure that all of the axles can spin freely, as having friction here will have a significant impact on how quickly it can go. When putting your chassis together, make sure to wiggle stuff around to find where the axles spin the best and then tighten there. 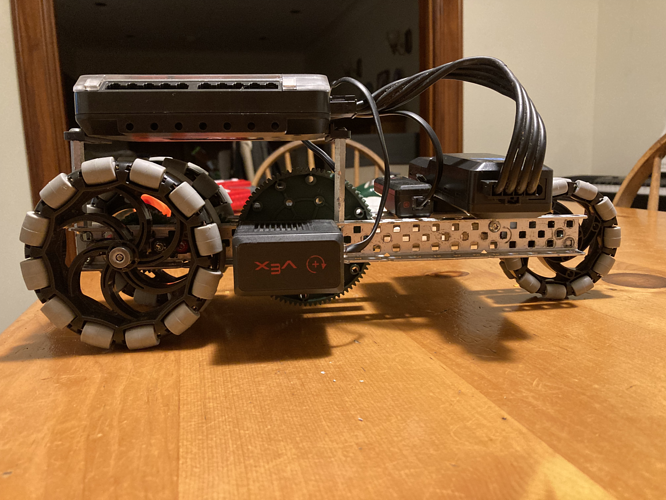 Also, as long as nothing is pushing the car left or right, use Omni wheels over traction ones. Omni wheels have better traction going forward and backward

That is great to hear! One thing to look out for is over-confidence in a single idea and too-swift dismissal of a new idea that doesn’t make sense according to what’s known so far. That worked for a cave-dweller who had to eat right now, but we can craft completely new thought processes every day in this context, and in collaboration with a big group of generous folk.
That said, on to your specific topic. I’m notionally an adult, so will coach rather than hand over. So far you’ll be using a v5 brain and motors to convert the potential energy in the battery into linear momentum via wheels. You could build in another store of potential energy to be added to acceleration alongside the motor effort. You’ll be looking for downsides (apart from harvesting the potential energy) in complexity, weight (pros and cons right here), and friction throwing away some energy.
I haven’t tried it, so it may not be beneficial on balance. Balance. Lever. Gearing. Weight. Height. You know how far you have to travel…