So I was scrolling through vex V5 product pages looking for cool things that I could use and saw this and thought it’s listed as legal that’s funny.

Then I kept scrolling and all the field elements are listed as vex legal.

One could argue that using polycarbonate from the Tip field elements wouldn’t count towards the plastic limit. And you could use the PVC pipes as well.

As well as the rings for some sick reason.

So is this just an oversight of the rules, or can i just not read?

yo, lemme just pull up during Spin Up endgame with an expanding Tipping Point platform

Why is your robot a high goal with wheels?

Its listed as a VRC legal part!

This also goes back to this topic

After scouring around in the depts of the game manual I have only found one mention of the vex work cell kit. The manual only disallows the 5.5w motors. But does not mention anything else about the kit. I was wondering if other parts of the kit are allowed such as the electromagnet(no mention of this in the game manual) or the weird conveyor chain, as well as many of the unique things in that kit.

Got it so I can’t read, but this does beg the question on why these parts are specifically listed as VRC legal. There is also the fact that in the way the red box is written field elements don’t apply, they are not Vex apparel, could be considered competition support materials, not packaging, and it is for robots.

Plus the game manual is contradicting its self.

Using VEX apparel, competition support materials, packaging, or other non-Robot products on a VEX Robotics Competition Robot goes against the spirit of this rule and is not permitted.

Products from the VEXpro, VEX EXP, VEX IQ, VEX GO, VEX 123, or VEX Robotics by HEXBUG product lines cannot be used for Robot construction, unless specifically allowed by a clause of or “cross-listed” as part of the VEX V5 Product lines. For example, the Shaft Base Pack (228-3506) is a VEX IQ component that can be found on the VEX “Drive Shafts” page, and is thus legal: Drive Shafts - VEX Robotics.

The product that I listed are cross listed as part of the VEX V5 Product lines, and some of them could be considered not illegal under the red box depending on interpretation of “competition support materials” and what “non-Robot products” are.

depending on interpretation of “competition support materials” and what “non-Robot products” are. 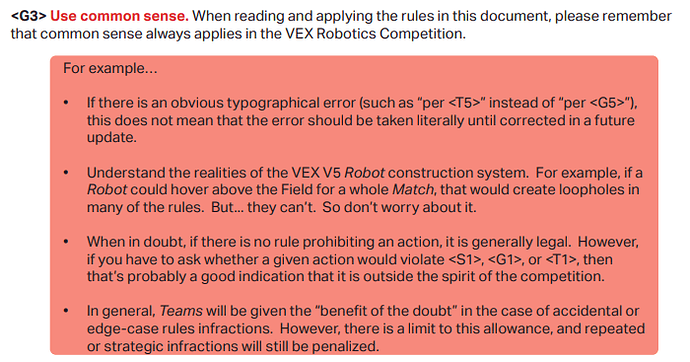 Can I use the crimping tool as a part of my robot?

So sad we cannot use VEX cable cutting and crimping tool as a legal legacy claw replacement.

As well as the rings for some sick reason.

How about legally increasing air storage?

How to legally increase air storage: 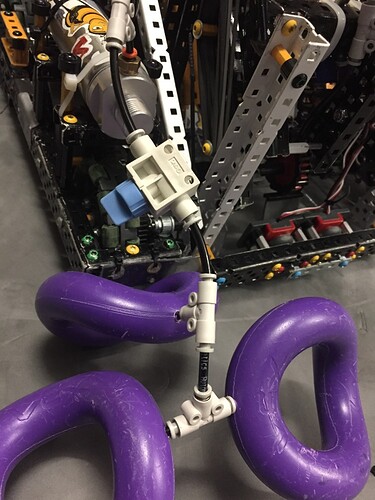 does that mean that the tipping point plastic is illegal even if it is a custom-made part?

used the flags from turning point for custom polycarbonate parts.

The flags from turning point are neither legal nor illegal because they are field elements, but because the material they were made from is a Vex legal plastic, that is polycarbonate less than .070 in thick, the flags can be used as a source of Vex legal material.