I just got a vex V5 starter kit and I built it the first day and went on to Vex Coding Studio. I clicked on brain and it said I needed a update. After I waited for the Update to finish and the update failed. Ever since that I keep getting a error message that says Invalid asset table version.

This has been a common problem. You will need to use the latest version of the standalone VEXos firmware update utility and make sure any other programs like VCS are closed.

More details could be found in this thread:

If that doesn’t work, select the force update option after following the instructions below for showing the advanced options. 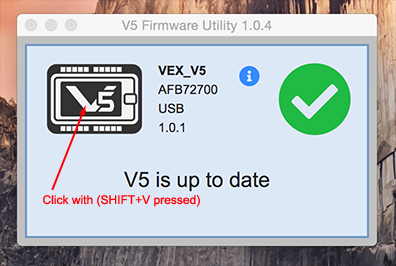 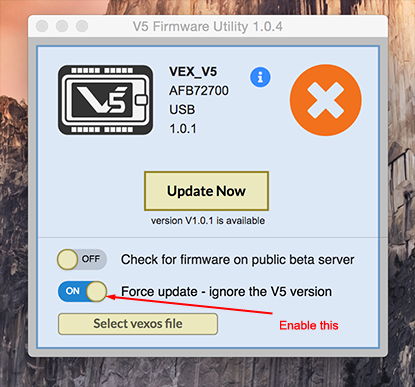 Our students briefly saw that red screen while updating the firmware yesterday.

Have you updated the firmware to version 1.0.2?

Finally, you may want to switch from VCS to a newer VEXcode programming environment:

As most people have noticed by now, it’s been a while since the last update to VEX Coding Studio. We understand your frustration, but due to some unforeseen issues the next release is still not quite ready for the public. That being said, we’ve heard many of your concerns. We’re happy to announce that we’ve been working with Robomatter to create a new, text-only programming software named VEXcode. We have realized that many of the advanced text editing features that our users need do not fit in…