I am usually not the kind to make a chit chat thread, but this is somewhat relevant to programming so I thought it wasn’t too out of place.

It has recently come to my attention that there are people who primarily use the left shift key on their keyboards when typing, and I was appalled to hear this. I refuse to believe that such people make up a significant portion of the population, so I thought I might ask here. Left shift or right shift?

I should clarify this is specifically for typing, not for playing games.

Exclusively. I’ve never even touched the right shift key on my keyboard.

Holy crap. There’s a shift key on the right side of my keyboard?

Left shift is just one key below where my left pinky rests; to press right shift from the home position I’d have to move my right pinky out as well as down, which feels somewhat uncomfortable.

My right shift is always remapped, and not a shift key. Most of the time, it is a third backspace

I press the right shift key with my right pinky. It would be very unnatural for me to press the left shift key.

Capslock is useless as Capslock

What about those people who use either Left or Right Shift key, whichever happens to be closer to a currently free finger?

A centipede was happy – quite!
Until a toad in fun
Said, “Pray, which leg moves after which?”
This raised her doubts to such a pitch,
She fell exhausted in the ditch
Not knowing how to run.

ThAnKs FoR sLoWiNg DoWn My TyPInG sPeEd To A cRaWl, TaRaN! "The Centipede's Dilemma" is a short poem that has lent its name to a psychological effect called the centipede effect or centipede syndrome. The centipede effect occurs when a normally automatic or unconscious activity is disrupted by consciousness of it or reflection on it. For example, a golfer thinking too closely about her swing or someone thinking too much about how he knots his tie may find his performance of the task impaired. The effect is also known as hyperreflection or Humphrey's law[...

What about those people who use either Left or Right Shift key, whichever happens to be closer to a currently free finger?

Ahem, I beg to differ. But i was thinking about this during English class the other day and wanted to see if whatever shift key you use could correlate to your dominant hand.

Then we can compare the results to the shift key preferance.

If I’m on a standard desktop keyboard, I’ll use both shifts. If I’m on a chromebook without a caps lock key (grumble goml), and I’M TYPING FOR EMPHASIS, then I’ll favor the right shift since the left hand types 56% of the letters.

The shift key is prevalent in selecting groups of items. Since the majority use a mouse or arrow keys under their right hand, it would make sense that the left shift key is used more often.

i press both, i program and type in a very non traditional way, and i just press whatever is closest.

Same here, but I don’t use the right shift

As a professional keyboard hand analyst, I would like to present my findings.

Starting off, I have developed an advanced diagram of exactly where my own hands rest when not typing. 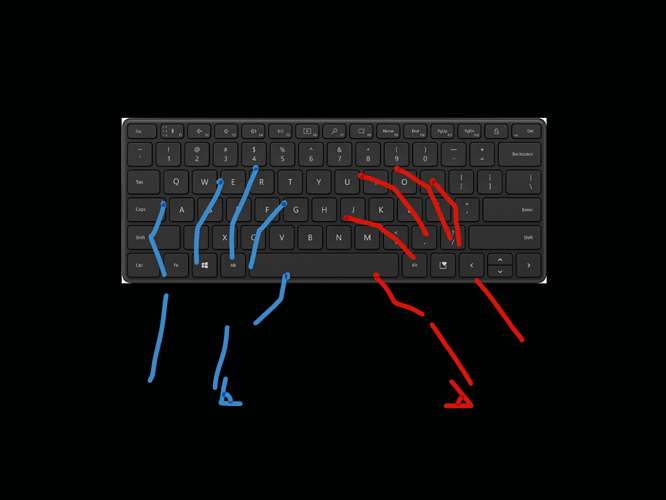 You will notice that the right hand is folded sideways slightly more than the left, and it also comes in at a sharper angle. My advanced studies have indicated that this is in order to reach the delete button with greater ease, and quickly switch to usage of the mouse just by pivoting the arm.

Plus, as a right hand dominant, I can pivot the wrist to hit enter easier as that side has more dexterity, while if I had to pivot my left it would spend time tapping around to find the correct key, like Velma finding her glasses.

I have been in a mastery class on this topic for about 21 years now, I am grateful I can finally share my findings.

I learned to type on one of these in 10th grade typing class: 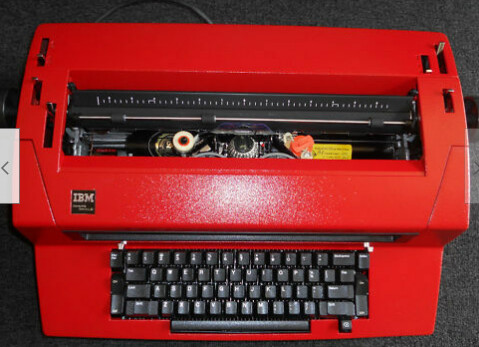 I think the primary reason for always using the opposite shift key with typewriters involved the force required to press keys (especially on a mechanical typewriter).

When I am using a standard keyboard, I am always using the left shift, although that led to a sore hand when doing coding (LOTS of shifted characters). At work, I now use an Ergodox keyboard (I never claimed to be normal…)