New claw for rise above

I created a claw, I tested it and it is cool. It needs some upgrades but it is good for stacking risers.

Do you have a video of it in action?

Ya I am gonna release it after Sunday. This week I am busy.

Our team tried using the exact same type of claw for last year’s challenge(Squared Away), but we abandoned the idea due to the size limit.

The nice thing about Rise Above is that there is no size limit once the match starts.

I am going to try this claw in the next few days and see how it works on the risers, as it is supposedly

I’ll also see what I can do for the upgrades that @Sharky_do mentioned.

It looks nice, but I might recommend moving the 1-wide angle pieces out to the other sides, so that the claw goes into the insides and goes outwards to grab it, so that it doesn’t really matter which way you grab it from.

What do you mean, why not both?

Why not put the angles on both the insides and the outsides?

I guess that would work too. Then you could grab a riser from the inside or the outsides… I like that Idea.

It is an interesting idea. The problem with that is that there are too many options. For example, in the last seconds of a match, you could be contemplating whether to grab from the inside or the outside, and that could result in you not getting the stack in time. I know because I tried this, and what I mentioned above happened many times.

For lower level teams though it could be a good option as time in a match is less valuable. I am not putting down anyone or anything, just explaining why I didn’t do that idea.

I was thinking it might make it easier with regard to riser orientation. If the vertical standoff between the riser layers is facing the robot, grabbing around it would work better; if the robot is lined up with the gap between the standoffs, then an inner grab would be the choice. With enough practice, the drivers would kind of innately expect which way to go.
Especially during the programming skills runs, this adaptation could slice some valuable seconds and lines of code spent positioning and orienting the robot.

@himnew, We know your new but please do not put random posts. This is Vex fourm not discord where you can say random stuff.

Alright, I see where you’re going with this, and I think it could work. My only concern is if the standoff is in the middle of the two positions. I think that like you said, driver practice can solve this problem. It definitely is a valid idea. Good luck with it!

@Sharky_do ok sorry my bad i will not do again

That’s a neat idea. How does that perform when moving 2 risers? Is there another layer of triangles to keep the top riser in place? Or does it still have a topjaw come down to capture and hold?

So, @Sharky_do is that claw kind of like the Razorbill claw?

Yes it is kinda like the Razorbill claw but it is used to grab risers from the middle.

You mean from here? 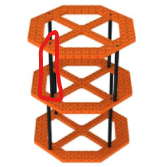 Ya I am gonna release it after Sunday. This week I am busy.

I am looking forward to seeing it in in action, so I’m waiting for his video and then I’ll try making one.