Do I seem excited?! I am! I love IQ and this new stuff looks really good. 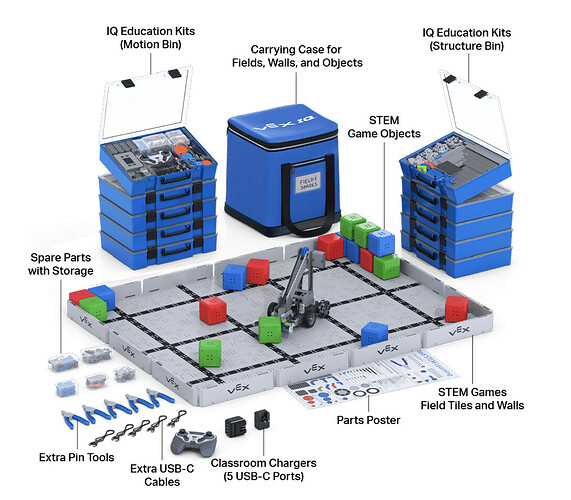 Gee, I wonder where the idea for 5S style storage came from???
April 2019: Starting a new class w/ VEX IQ and EDR - What would you suggest? - #16 by kmmohn
All the profits from selling these organizers through robosource.net went to funding our team.

Thanks for your work.

I didn’t even know those were available. I would have purchased about 40 of them back then if I had known. Oh well. I also was selling peg pullers. The new tool is much better though… so is the storage.

They’ll still be available until Robosource runs out. (which will take a while) I like the uniformity of all our teams (and summer camps) having the same system, so I’ll be saving out a couple dozen myself.

So, is this just updated brain and sensors and stuff? No new motors or anything? At least we are just about to place our season starter order. Just in time, looks pretty cool too.

So, is this just updated brain and sensors and stuff? No new motors or anything?

The FAQ Page and 2nd generation comparison page show some of the new electronic components.
You’re right that there is a new brain, new battery, new optical sensor (to replace the color sensor), and new Distance sensor (2nd gen).

You’re also correct that there has been no change to the IQ Smart Motors.

Check out the graphical contents of both kits here:
Education Kit
Competition Kit

I wish that an initial product offering of a brain, controller, (2) batteries and (1) of each 2nd gen sensor was available.

Any word on a trade in/up program. Maybe a 2 for 1 that includes the sensors. V1 brains can be used for a new grant program.

I think they said in the q&a that they are not going to do it.

Just wondering,Is the controler new as well or its the same? Also I want to know how much are they charging for two gen two battery, new gen two brain, and new gen two sensers?

The official announcement here on the forum explains that the controller has an integrated radio and gyro. It seems conterproductive to have this second thread distracting folk from the main post where everything’s detailed? It’s all here: New Products - August 2021 (VEX IQ Gen 2)

I just realized, there is new TIRES The ultimate STEM Robotics kit is here! Build Blitz has over 800 easy snap-together pieces and can be built into seven different motorized robots without the use of tools. Smart Phone Controlled through the VEX Pilot App 7 different robotic...

The new 2nd generation full IQ Competition Kit contains a large assortment of all of the interesting and useful (for VIQC) parts from these HEXBUG VEX Robotics kits, especially those that were not previously available in IQ add-on packs.

We also created a variety of additional new parts for the 2nd generation IQ Competition Kit to complement these existing parts and fill in any gaps in functionality, such as more linear motion parts, the larger drop cam and follower, the new hybrid (spur+bevel combo) gears, etc. Besides the IQ Competition Spare Parts Kit, we’ll also be offering many of these new structural and motion IQ parts in new add-on packs in the coming months.

The part I’m most excited about?
Having the angle beams color coded, as well as the gears & sprockets. Brilliant!

I am hoping that VexIq gen two comes before states or before my team’s second comp.

What is the point of introducing new tires?

Personally, I don’t see a lot of value in the new tires versus the old ones, and while I’m not sure that there is any real advantage, it does sound like they are more squishy (although I’m not too sure how that would be useful in a practical sense):

This new Gen 2 IQ too much for my brain

Im glad kids will have access to more interesting pieces