You know what, I’m really interested in this design, so I’ll kick things off here.

How does your bottom claw align the risers with the side you pick them up from?

The pusher is really the magic to that. The front of the robot (the pusher) evolved over time to what it is now. For this robot, this is probably the part of the robot you’d need to copy exactly or at least pretty closely.

When you drive into the risers, it is designed so that the risers automatically turn and go to the correct position for pickup. The key is that the robot reacts against the middle plate of the riser, not the standoffs. This ensures that the risers can’t get stuck in the front of your robot. It’s kind of hard to explain, but I think you’ll get the idea. Let me know if you have questions.

why does this forum exist? no offense but u might want to edit cause there is already aforum for this

You’re right, the name is definetely misleading. Maybe @FRC973should change the thread title to something a bit more associated with your team.

You’re right. I should have called it something along the lines of “97300J Robots.” I don’t have the ability to rename the topic, but if someone else does, then they are welcome to change it to something like that. I’m sorry for the confusion.

If you only used one motor and rubber bands to move the 4-bar for the robot that scored 210 points in skills would it still work just as well when you’re lifting risers?

Also, how are you guys doing with programming so far?

Oh I really want to make a drb4 but don’t know how. Could someone give me some close ups of their robot?

Is that for this competition?

I really want to make a dr4b but with three arms. Like your first bot, sandstorm. But just a dr4b instead.

You might make yours better than mine, but I’ve tried this and I realized that it doesn’t exactly work well, especially compared to the metas. It’s heavy and you don’t need to go as high as it allows. I think that a regular 4-bar would be easier and more efficient.

If you really want to make one though I found this video. It has some close-ups and will give you the basic idea. 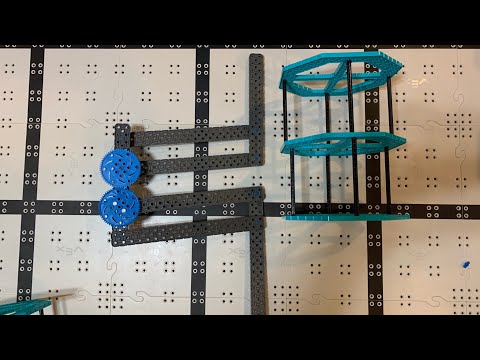 There is also the DR4B tutorial that was made by 333A. It’s for VRC but it translates over to VEXIQ.

Probably not, but you could try it. It is already loaded with rubber bands, and also, what would you use that last motor for? There is no room for an H-Drive on a robot that small. One reason that I could see would be that it is lighter and so it is faster, and that could definitely help. Let me know how it goes (I haven’t tried it).

We are doing well in programming, and we pretty consistently use up all the buttons on the remote with 200+ lines of code. This year is especially difficult because we have an automated place sequence, where when you press it, the robot places all the risers down in a neat stack and it lets go. It works about 95% of the time, and it took a good deal of tweaking and perfecting. In terms of the programming skills challenge we haven’t started, but that is the next thing on our list. How are you doing with programming? How is your robot(s) this year so far?

I actually tried to create two unique robots this year, and it took me forever. They failed. One of them was just too inefficient while the other just didn’t work. I’m now trying to make a back up robot similar to a couple metas online in case my next idea doesn’t work out either. If all goes well, the meta will be better than anything on youtube so far.

I’d love to see it when you are finished!