I decapitated a broken Jazz sax Santa animatronic. We put the head on our robot as a decoration.

Maybe some that are quite common

“Altiora Peto” ( Meaning “I seek higher things” in latin)
We say this because one we do stupid stuff so it’s ironic but
also so our robot can be better.

Coder: “Reset the field”
Me: “After I read every post on Dankest VEX Memes for the twentieth time.”

The sad story of how we competed in our first tournament this season with our backup-backup-driver.

Well, glad you planned it out that far. We usually just assert drivership the day of and all train equally before hand.

Programmer: Ya know, you are the smartest dumb person I know
Driver: …

“What music are we listening to today boys”

At a recent Live Remote Skills

Team: “are the judges ready?”

Referee (slightly annoyed that there is yet another team that doesn’t know the difference between judges and referees): “There are no judges here, this is not a judged event. The referee is ready.”

“Why can’t we use flex wheels on the base?” 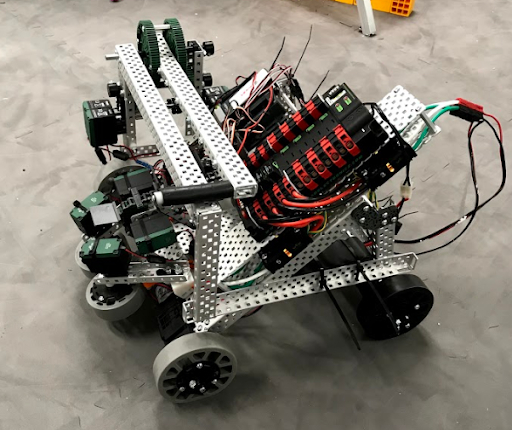 That is exactly something I was going to say!

“Stephen why does your robot kill its self every time you turn it on?”

“why is everyTHING IN A WHILE LOOP JOHN?!”

our driver - “things are falling off guys” our builders- “stop driving terribly then” driver - “uhhhh, stephen, the intake fell off” builders- “again?” programmer (me) - “can we stop building robots that should throw themselves in the trashcan?”

most of my team roasts each others robot, code, or attachment of motors

“Rectangle, toss me that square. Stop glaring at me, would you?”

“Why can’t we use flex wheels on the base?”

I recall having a similar discussion with other drivers on my team, we all agree it would be the most effective base