Possible To Record Driver Routine To Autonomous On V5 Brain?

Is it possible to somehow record a driver routine and then use that routine as a autonomous in skills or match? I know teams have done it on the old VEX cortex but not sure how to do it on V5 Brain.

It is very possible, in fact, I’ve done it. It was just a little side project though, and didn’t work well enough to use in competition.

If you really wanted to, the easiest way to essentially do that would be to set up an odometry code, record the values while driving, then program manually off the values. Any time you try to teach the system to code itself, it will be much much much harder. (did you get how much harder it would be? lol)

I believe Mr. Nick Mertin posted 5225A’s code at some point, or a guide on how to recreate it.

Could this way of coding be consistent if there is no slip or slippage on the wheels?

As part of the wheel placement, you would tend to place the trackers on small arms that hang down so that they maintain constant contact with the field. Also, since they spin freely other than the shaft encoder, there should be no slippage. Therefore, there should be no mechanical slop.

Further, if you do your trig well and use precise functions, you should be able to get your exact position within millimeters. With that in mind, you can work the equations backwards to teach the robot how to move to a specified place, which would be within millimeters. Personally, my user error in measuring is greater than the distance from actual position to intended position.

Then, if you want to take it another step, you could have the function update along the way, as in, if it got pushed out of line or something else goes badly, the robot will correct itself and continue to the desired destination.

TLDR: Yes, if done well, you could have a virtually perfect auton. However, I would suggest due to driver control errors, just code it instead of tracking the driving. It will be far more precise.

I hope that made sense.

iirc this method of creating autonomous (recording driving) is called a rerun. From what I’ve heard they are not super accurate, but @Sylvie made a video about it in the past 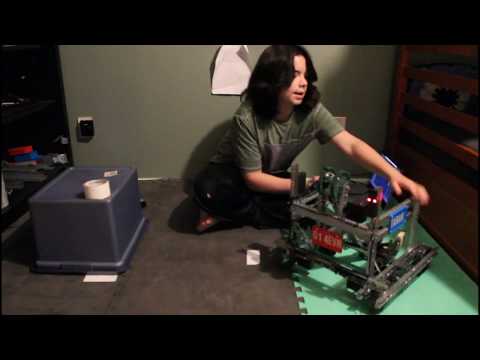 Oh god me from 2 years ago. Much cringe.

I have made a rerun program based off of @Sylvie’s video and it did the job. While it wasn’t the best, we still won almost every auton last year because of it. We wanted to only focus on skills programming so the rerun code was a easy way to hurry and make a match auton so that we could do what we wanted.

It’s definitely possible, I’ve done it before and it works, although it will most likely be less reliable than an autonomous using functions to make more precise and consistent movements.

For a quick autonomous that you need to get done quick though, I would say it is a very good option if you’re low on time, granted coding it can be fairly long at times.