Today I want to share a possibly OP motor sharing mechanism that I discovered while working on my ratchet tutorial video. 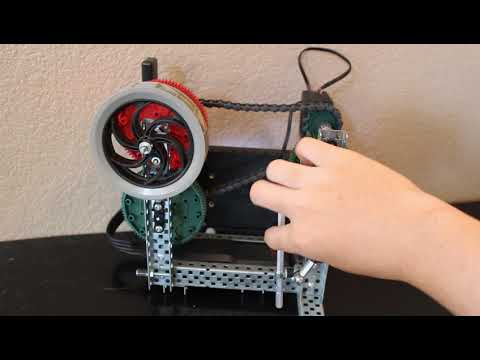 Feel free to ask any questions or leave any comments

Nicely done. I was thinking of the balls being able to push the door open, but I like the lock as a solution!

It might be interesting to attach a pulley or something to the flywheel and lift weights to measure how much power loss the friction of the ratchets have.

Jeez, what is up with all the good posts today? I really like the linkage locking thing on the trapdoor, I wonder if you could apply it on a lift or something else which needs high torque.

i was confused about your design before but after watching this video I finally understand how it works. Good job!

Taran this is genius! Great build dude. I was thinking of making a 3 ratchet system as well for a similar mechanism but you beat me to it. Great job as well with the lock as well.

Nice work. Very well thought out. Were you actively seeking to build this or did it just occur to you by accident? How long did it take to develop?

As I said in the video, this is really just a test bed, and things would be positioned differently on a real robot.

Were you actively seeking to build this or did it just occur to you by accident?

How long did it take to develop?

It would have taken about a day, but since I had most of the structure already made, it only took a few hours to build, with an additional hour or so to film/edit/upload

I have considered the fact the on a real robot, the trapdoor would need to pivot the other way. I am aware of this, and would build it like that on a real robot.

Well awesome, nothing like that would ever occur to me, I would definitely have to put thought into it.

You are saying flip in to maybe block balls from going up the indexer and into the goal??

I would definitely have to put thought into it.

Thought was put into this, but only after I decided to try and build it.

I try tons of things, and only a few work out well enough to put time into filming. You just gotta think of stuff and try it.

You are saying flip in to maybe block balls from going up the indexer and into the goal??

Also, y’all can stop DMing me telling me about how the door spinning this way wouldn’t work. I am aware and have already addressed this.

Oh yeah I just mean I wouldn’t even have had the idea to try and build such a thing (the theoretical knowledge to begin with). So why wouldn’t the trapdoor opening out work? I would think that it would be better to have it open outwards because it avoids the contingency of jamming on a ball.

So why wouldn’t the trapdoor opening out work?

Yup, problem is if it opens the other way you get issues with balls clogging. It’ll take a smart solution to get this final piece of the trapdoor figured out

Taran, how will having the door go in fix that?? If I am thinking correctly the problem would still exist. Are you relying on the trapdoor to become a surface of compression for the ball so it is able to contact the rollers enough to be pushed outwards? (So it doesn’t just spin and sit there or whatever the specific behavior would be)

Awesome, I hope it works. Id love to see trapdoors be the cube locks of this season

How about no. I’d rather that didn’t happen.