actually the 3rd one…

actually the 3rd one…

What happened to AURA?

AURA only competed when their uni schedule allowed for it. This is why they did not compete in Sack Attack or Nothing but Net. From what I have heard on the Unofficial VEX Discord server, it looks like AURA will rise from the grave and compete again this season, even with New Zealand’s stringent COVID-19 Protocols.

As for the CAD model of their Skyrise robots, I’m not if they were ever completed. I would ask the person who was going to create them whether of not they ever got it done.

As for the CAD model of their Skyrise robots, I’m not if they were ever completed.

OYES…. They competed in Skyrise.

After starting the season slightly on tilt, AURA have arrived in Louisville ready for Worlds. At midnight tonight (14 April) we will be revealing our robots here - http://www.aura.org.nz/2015-reveal. AURA has had the pleasure to clock up 1400 volunteer hours helping out the New Zealand educational robotics for school age kids in the last year. Our members include the recipients of 7 separate world championship titles. We can’t wait to see all the other VEXU robots tomorrow! Make sure to stop…

They were represented by @jacko Jack Barker and gang.
Some of them have moved on and formed the current Endgame in Battlebots. 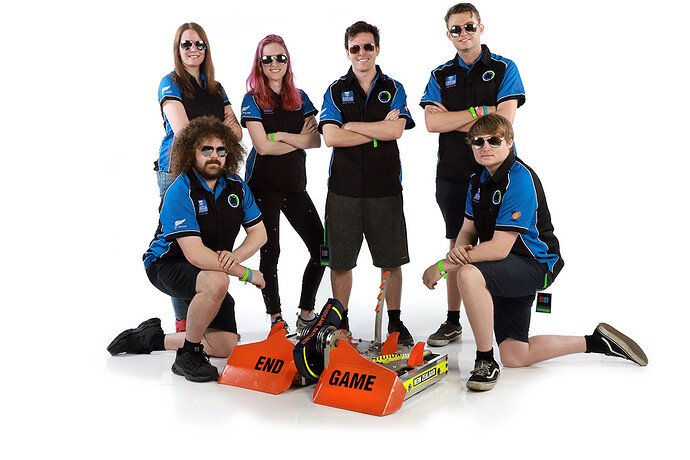 And btw, the Skyrise VEXU final between AURA and QCC2 was still widely regarded as the highest level of VEX engineering, programming and gameplay in VRC history, 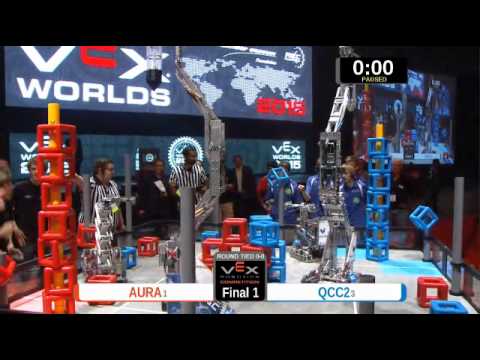 Edit: sorry - misread the word “completed” as “competed”. Oh well… still a nice piece of history for all that are new in VRC

you know, I ask myself that very often. they are very complex robots and 2014 cameras were not amazing. I have restarted a few times while updating CAD libraries. I have just not been motivated for them. the 24" will almost certainly never be completed because CADing that needle is almost impossible but the 15 might happen still.

Note: Everyone look at the Vex CAD server and search AURA to see how long I have procrastinated on it

Hello everyone!
I am announcing a project I will be working on for the next couple months, which is to cad 4082B’s Tipping Point worlds robot.

If you haven’t seen it already, here is a picture: 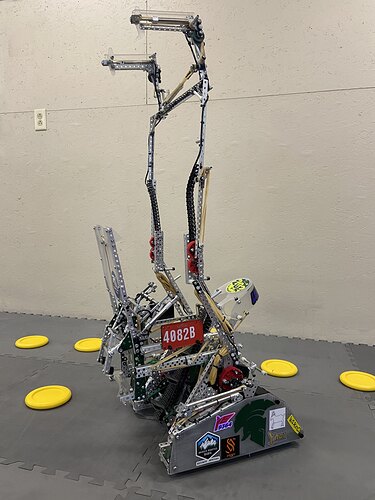 image3024×4032 1.7 MB
This robot is one of the most impressive robots I have ever seen in all of Vex, and in my opinion has no better place than to be included in this thread. The most impressive part, however, is the fact that this robot was not cadded. 99% of robots this complicated, sturdy, and also insanely compact are cadded, since there is just no way to plan this stuff out this intricately without using some kind of cad software. Unless of course, you are 4082B…

This was a jack of all trades robot, having the ability to score on all scoring locations except the middle posts of neutral goals. It was able to accomplish all of this fast and consistently, all while utilizing an 8 motor drive. On top of all that, it included a transmission on the drivetrain with a high gear of 600rpm and a low gear of 120rpm, for tugging robots across the field. This worked simultaneously with their PTO, which transferred motor power from 2 of their drive motors to their lift. They could be 6m drive 120rpm, 8m drive 120, 6m 600 and 8m 600 depending on the current need. Pictures can be found below: 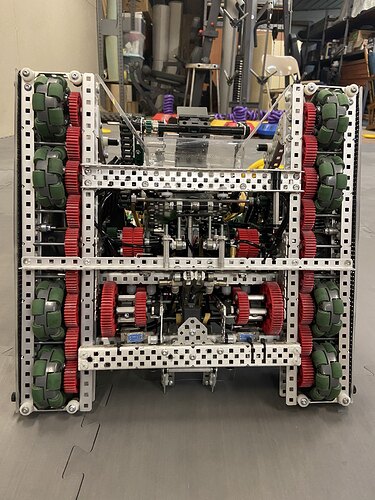 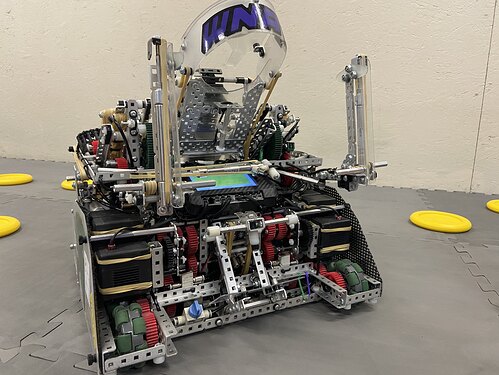 image4032×3024 1.75 MB
on top of all this, the robot was designed to fold up all below 12”, so they could fit almost entirely under the platform at the start of auton and have a massive advantage in the rush for the tall goal:

I don’t want to spoil too much of it, as there are numerous additional innovative aspects about this design that I will leave for them to explain in their explanation video.(

I don’t expect the cad to be done for another couple of months, as it is partially a learning opportunity for myself in trying to learn Inventor instead of Fusion 360 as well as a personal challenge. Their use of custom parts and the number of small movements happening at any given moment on this robot was unmatched. I also would like to have time to cad my own Spin Up robot, lol.

Anyways, I hope you enjoy this little teaser and I will see you hopefully in July!

Can’t wait to see it, whenever you get a chance DM me and I can add you to the google drive!

This is, in my opinion, the most impressive vrc bot ever made. Super glad to see it being preserved and publicized in CAD form for everyone to see, if any robot deserves to be here, this certainly does.

@Zach_929U, and others involved in Remembering the Best, I know that 44 was mentioned here several times as a possible addition to the list of bots to cad. A few weeks ago, someone posted pictures of 44 Toss Up’s robot. Is there a chance that robot could be cadded? I’d love to see that.

I’d love if it were and I’ve had a couple people reach out asking to do it. From what I know Andrew Elfman from GOATS wanted to do it at some point this summer but I don’t know the status or timeline cause i’ve been pretty inactive with this whole project since I did the 400X cad. I’ll try to reach out and see if its still something that might get done.

That bot is on my to-do list, right now I have the QCC2 15 and was waiting for Tipping Point to end before I began work on it, next was gonna be the QCC2 24 or 44 TU bot.

Yo everyone, have some updates.
Last fall, the project started getting hosted on the Purdue SIGBots Wiki with the VexCAD libraries. Not sure if I mentioned that but it is here for some better viewing:
https://wiki.purduesigbots.com/vex-cad/remembering-the-best

And new as of today, the library is also hosted on VexCAD’s GitHub thanks to YY and Jess. This should solve some of the downloading issues people have had and make the files a little bit safer with some backups and the such. This also makes it possible for people to make their own pull requests. The only downside is the steps need to be zipped which is one extra step but it should all be faster and easier. 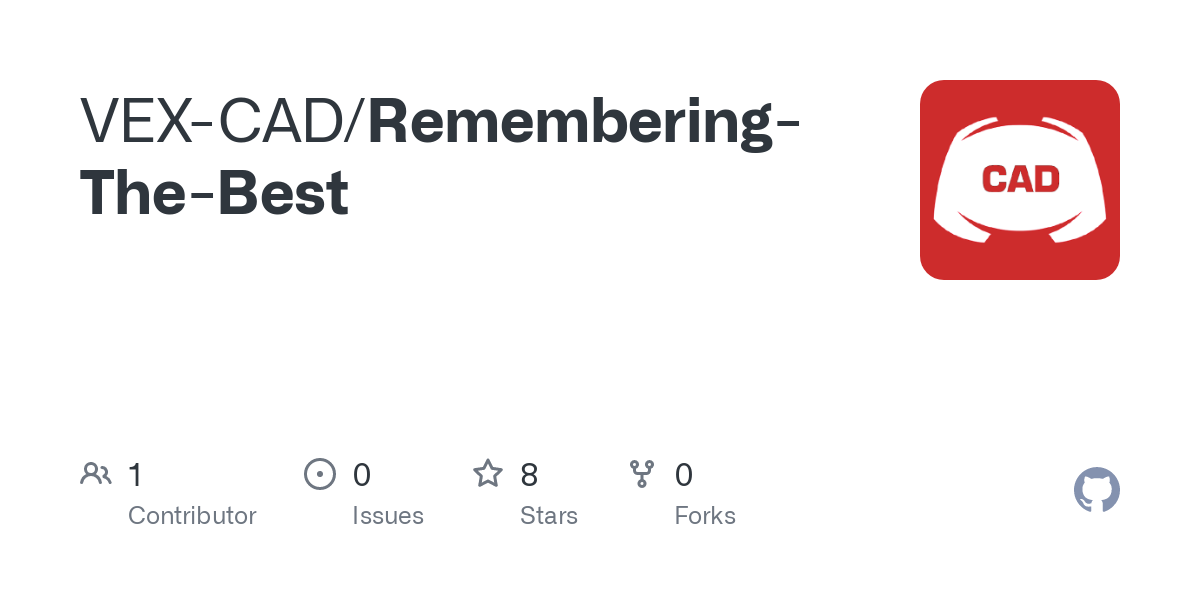 Contribute to VEX-CAD/Remembering-The-Best development by creating an account on GitHub.

Slight update on this:
I have unfortunately decided to indefinitely delay this project; I still plan on finishing it, but as the robot is so impressive and complex, it turned out to be a much more daunting task than it initially seemed. I want to take the time to do it properly and not poorly, and currently I don’t have that kind of time. With college apps and keeping my grades up, as well as working on my own robots, I haven’t have time to make meaningful progress on it. I can’t wait to work on it more, and I’m excited for the result and how many teams this will help/inspire.