The game manual defines hoarding as follows, and limits it to only one goal per alliance at a time.

A Robot is Hoarding if it is in Possession of any Mobile Goal in either of the two (2) corners of the field in their own Alliance Home Zone (i.e. positioned in the corner roughly the size of one foam field tile). See for more information.

As others have noted, though, there is no possession limit. This means that, according to the current rules, a team could build a robot designed to “hoard” goals through simple possession without ever meeting the criteria of illegal hoarding. A strategy like this could become especially dangerous if the goal-stuffed robot could balance on the platform, scoring 40 points per goal and 30 points for the robot.

Some people have mentioned that it would be unrealistic for a single robot to take control of all of the neutral goals, or even of two of them, in a competitive match. This is probably true of normal robots, but a robot purpose-built for goal collection will have the excess motors and space needed to design mechanisms specifically for stealing goals from other robots. Most forklift-type goal lifts would be vulnerable to a simple claw that lifts goals upwards, for instance. Clamping onto goals (legal since they’re not field elements) and just outpulling the other robot with a 6M drive or something is also a possibility.

SG7 seems to be intended to encourage offensive gameplay by preventing one robot from controlling an excess of goals without any intention of actually scoring rings on them or releasing them. Goal-gathering robots like those described above violate the spirit of SG7 while staying within its letter.

Should VEX add a mogo possession limit (2 or 3 seems reasonable) to prevent this type of strategy? On the one hand, I’d really rather play an offensive game where people build cool mechanisms to score rings than a defensive game controlled more by driver strategy and luck in auton. On the other hand, I’m sure that the GDC expected these types of strategies when designing the game manual, and they explicitly excluded them from the definition of hoarding. What do you all think?

I don’t have an opinion on whether or not this should be changed, but I do want the gdc to be aware that robots will be created with possession of 4 or more mobile goals in mind, and if this is a strategy that the gdc does not want to exist, they need to make that change now before teams invest a lot of time into developing those kinds of strategies.

robots will be created with possession of 4 or more mobile goals in mind,

Cool, we’ll see more than one type of robot, then! As a referee/judge/spectator, it gets a little boring when every team builds the same robot. Only the most advanced teams can pull this off, so there might be only one or two at an event.

Like Xenon, I don’t have an opinion. However if they are going to change it I hope they do in the next week.

If they don’t add some sort of possession limit, then they might as well reword SG7 to remove the locking down excerpt, because at that point it’s just a plain lie. /s

I don’t really care one way or another, I’m with the others that the change just needs to happen sooner or later if it is going to change, just find it a little funny that they’re saying one thing while letting the exact opposite happen.

Carefully re-read the definition of hoarding, which is a very specific form of possession which can occur only in two places on the entire field. If you can manage to pick up more than one mobile goal and still be able to drive around, just don’t go into the corner of your own alliance home zone and you’re fine. I’ll give you 99.999 percent probability that the GDC has no issues with trying to hold more than one mobile goal and determined that to be part of the normal game play.

No VEX should not ban it, as it will make a more diverse game which in turn is more fun

I think hoarding and possessing multiple goals are very different things because of how easy it is to hoard goals. Building a bot that is able move goals into a corner one at a time is very easy and comes at basically no cost. On the other hand, building a bot that can possess four or more goals is much more difficult and forces teams to make huge trade offs. Trade offs include sacrificing motors and a lot of space in the bot to store these goals, needing to be slower or having 6 motor drive to have enough torque to drag around the goals, and having it be either really difficult to or being not even able to climb the platform that gives a huge point bonus because a bot that possesses more than even two goals is going to be really big and really heavy.

I think that the multiple mogo possession rule will end up making an extremely boring game to watch, and basically make it so any robot that can grab 5, maybe 4 insta wins the match. This almost completely eliminates rings and makes it so that the game is won during auto. Do I think RECF and the GDC want this? Maybe, but my guess is no. I hope that its changed so only 2-3 can be held at a time.

I think that the multiple mogo possession rule will end up making an extremely boring game to watch, and basically make it so any robot that can grab 5, maybe 4 insta wins the match. This almost completely eliminates rings and makes it so that the game is won during auto. Do I think RECF and the GDC want this? Maybe, but my guess is no. I hope that its changed so only 2-3 can be held at a time.

I think you’re severely underestimating how difficult it is to build a robot that can hold 5 goals. And the fact that your opponents aren’t just going to let that robot pick up all the goals un-challenged. Rings will still be important.

The mogos are 13" wide, possesing more than 3 at a time would be EXTREMELY difficult.

just build a robot that can counter those strats

I could totally imagine crocbots with 8m mecanum drives and pneumatic jaws on all sides.

At the beginning of autonomous they will jump out at the high mogo from all sides, bite into it, and never let go for the rest of the match, each trying to pull it back into their home zone.

This is how the state finals could look like: 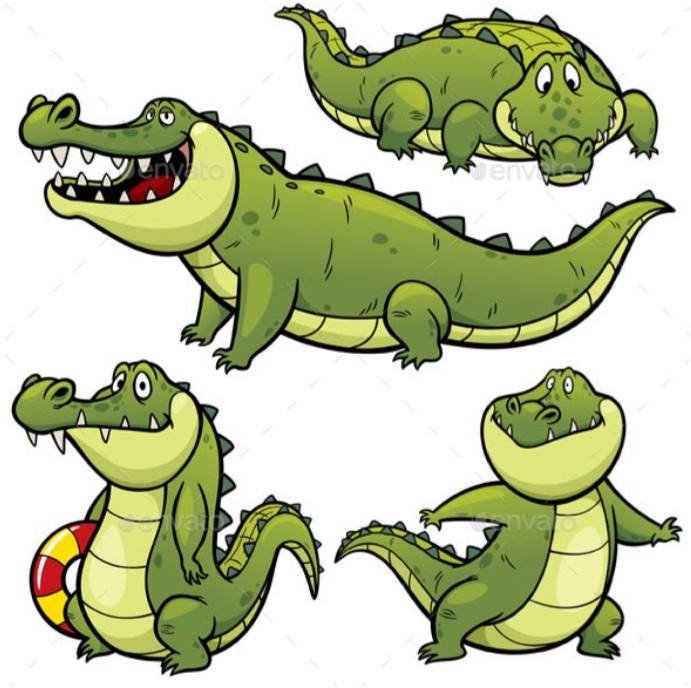 that is, um, grotesque

Welcome JakeNorth!! Just a minor point, VEX are the awesome people that design and sell the parts that we use in competition. The Robotics Education And Competition Foundation (RECF) are the amazing organization that runs the events. So your sentence should be “Should RECF add a mongo possession limit”

The last time we had a game like this, teams stashed goals under the ladder. Those elements were very heavy, the bases were filled full of sand.

I’d be excited to see robots grab all the mogos and drag them for 1:45.

To be fair, there are members of both the RECF and VEX on the GDC, so both organizations are involved in rulemaking.

If the GDC intentionally put absolutely no possession limit on any of the game objects, they are actively inviting teams to engage in strategies to try and hold increasingly larger amounts of game objects. The hoarding rule is just making it clear that teams which intend on controlling a large amount of mobile goals, have to do so through their own robot design and not by utilizing the corners of the fields. It’s not like they just released the game manual and forgot one of the most commonly used rules in VRC seasons.

I remember during ITZ season the question was “is it legal to drag around opposing alliance mobile goals?” or something similar - the answer was yes - and the team had a tow bar that allowed them to keep opposing alliance mobile goals during competition. This game is not exactly the same, but here are the pictures from the towing mechanism of the team from the QA at the time: 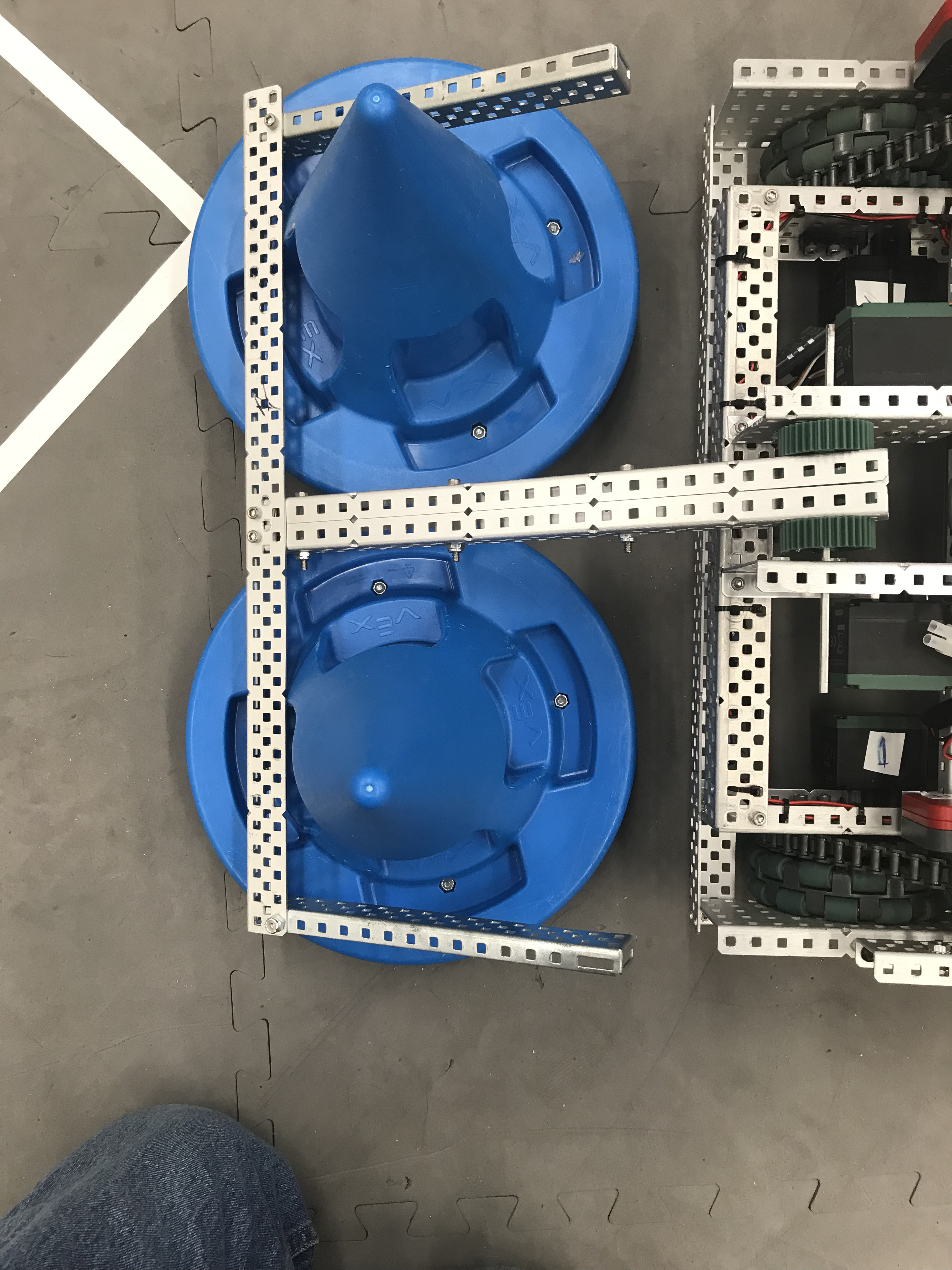 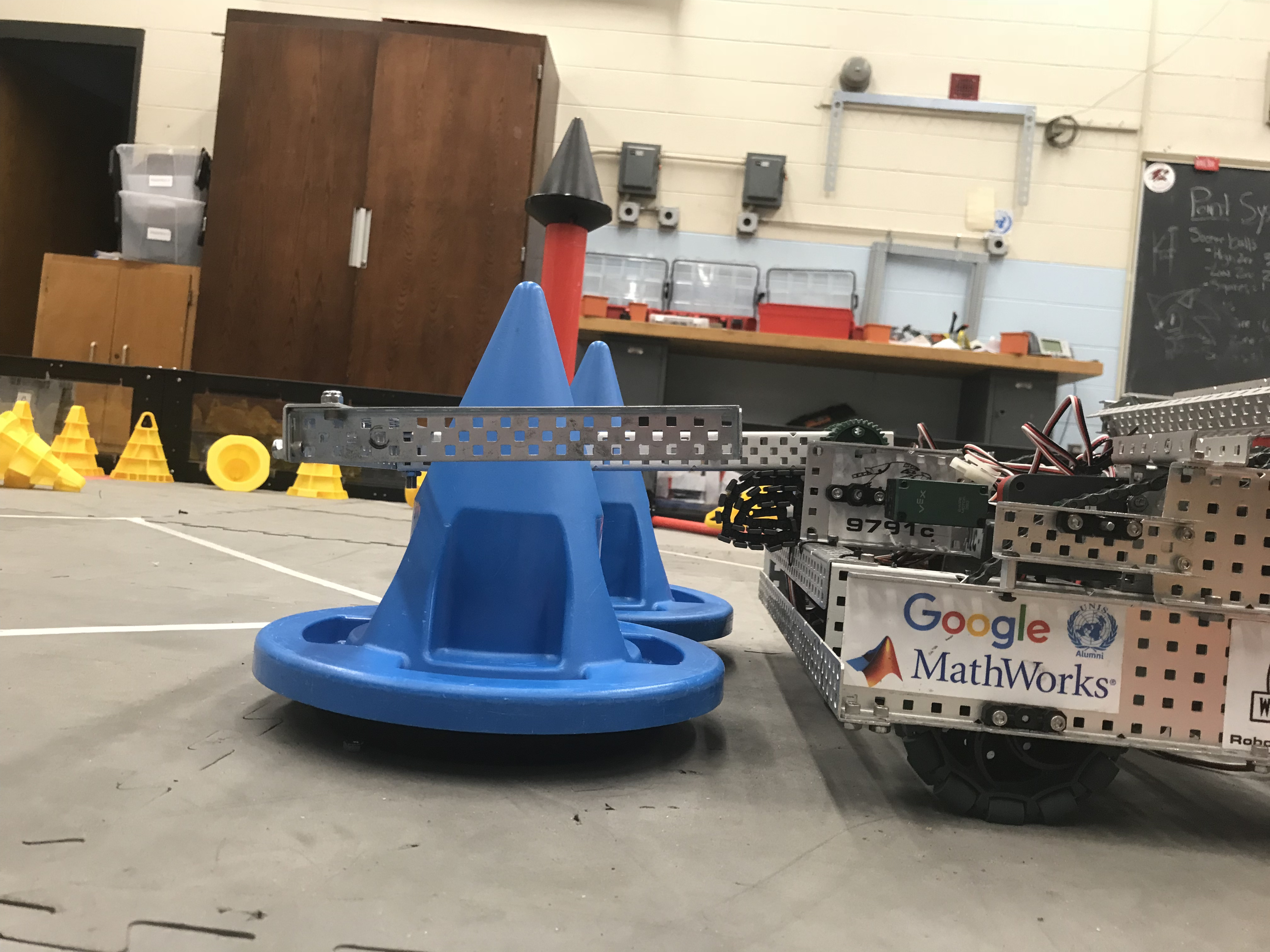 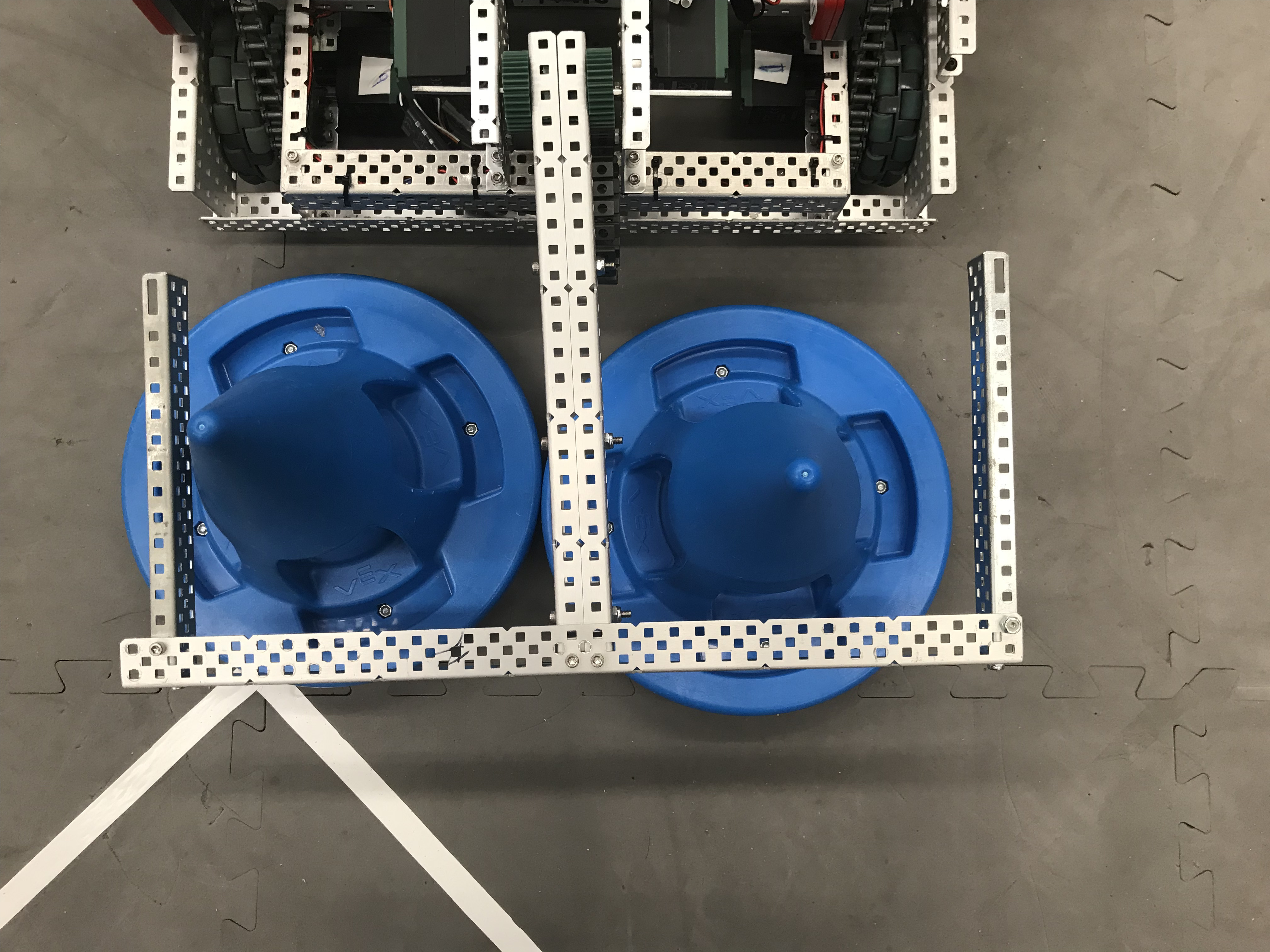 The design decision matrix question will be “is it worth it?” for this game.

I always find it difficult to understand why would competitors want GDC to impose rules that will restrict gameplay?

If GDC had restricted gameplay, then we might never get to see 2W in Gateway, which btw, is, the mother of all wallbots / capbots. Or 185A in Starstruck, etc.

Similarly, by getting GDC to impose restrictions in Tipping Point, it will only restrict the way the game can be and will be played. And limited ways the teams can play the game will inevitably lead to design convergence.

There are so many ironies here… eg. many of you focus and talk a lot about metabot, but yet you dislike design convergence. Many of you asked GDC to relax the rules on parts use (so that you can have more flexibility and innovative in building the robots), but yet you want to restrict the way how a team can play the game (which is also part of creativity).

Back to this season game…
A mobile goal is 13" in diameter, weighing between (about) 1.5kg to 1.8kg.
(Edit: And the horizontal expansion limit is only 36")
If there is someone out there that manage to carry all the mobile goals, then I will say - Great job! You made an amazing robot!

Moral of the story - be careful of what you asked for. All decisions cut both way.

But for me, I will always lean on the side that encourages creativity, flexibility and openness.