In light of the recent “Holonomic versus H-Drive” posts floating around, my team is under its own debate. I offered the solution of a drive similar to this where a holonomic drivebase is at an angle at 30 degrees. We are considering doing something like this. The reason is that strafing usually is used for maneuvering quickly, when torque really isn’t needed. (You aren’t going to push cubes or stars [onto an intake or under the fence] going sideways) If we positioned this drive so strafing is fast with little torque and driving forwards maintains a nearly straight gear ratio and maintains roughly 30% torque, then we may have an optimal solution, if a team is willing to build such a ridiculous drivebase. (well) What are your guys’ opinions on this matter? What angle would you recommend?

With that in mind, I still see the traditional 45 degree X drive and simple tank drives being the best options. In my opinion, the biggest uses of an X drive would be blocking at the fence and avoiding the opponent’s attempts to block. To do so, the X drive must strafe faster than a tank drive can turn, move to a new position, and turn back. However, the X drive also needs good forward/backward speed to get around the field and pick up objects, so it seems that a 45 degree drive would have the best overall performance in a match. I would say either commit fully to a 45 degree X drive, or just use a tank drive.

It does work, as in the drive does function, my former HS team did it the year after I graduated.

I’m honestly not sure about the torque, you are technically decreasing the angle of attack and thus trying to move a smaller unit of distance per unit of force, but I’m not sure if that translates to a real world measurable difference given all the slippage going on in a holonomic.

All in all, I would advise against it.

In addition to video link in OP, anybody interested in this topic may want to check AURA’s experiment video as well as their tutorials.

To answer the question about torques, here is the graph of the force and velocity as the function of x = angle between proposed wheel orientation and the default orientation as in the tank drive (straight forward): 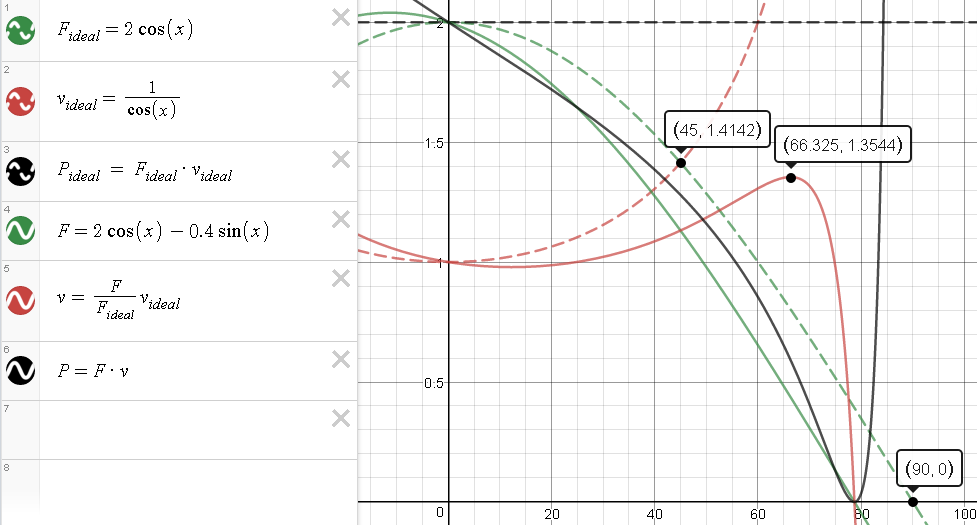 The unit of force is a single motor max (stalling) output and the unit of velocity is similarly its max (idle) velocity. In case when x=0 (tank drive) the force is 2 (two motors) and velocity is 1. Then, in the ideal case, force will drop as the function of cos(x) and velocity will grow reciprocally (dashed lines).

However, in the real world, friction, especially in the omni rollers, will make things less than ideal. As the angle (x) increases so will the friction loses and both force and velocity will start underperforming their ideal curves more and more (solid lines on the graph). Real formulas would be more complicated and I made friction coefficient high for the illustration purposes, but at some angle (x) the wheels will either slip or the friction will be consuming almost all available motor power, PTCs will be tripping, and both velocity and torque will effectively go to zero.

Note that power curves are not the real power output of the motors, since you cannot have both max torque and max velocity at the same time. Still they are useful for comparison of what you could expect from your setup.

So to answer original question I would agree with @Cody and recommend against 30 / 60 degree drive, because at higher angles it will be more sensitive to extra friction and you will be losing power fast.

But it would make a great entry for the eng. notebook to build a test chassis and measure actual forces you could get out of it. And, if you like what you get, it may work great for you.

@technik3k Thanks for all the math; I hadn’t really understood the reason against skewed drives. We mostly thought about this because, typically, if you’re strafing you don’t need much torque in the direction perpendicular to the drivetrain. Possibly, the loss of torque due to friction would still be okay, considering this. I do plan on building a test chassis, although in light of this information the design will not likely be integrated into the final bot.