[SpamBot] explains how to interface with EDR for a custom purpose

The fact is that VEX EDR especially for the VEX Cortex and VEX IQ and VEX V5 is a closed communications system. This is natural since IFI sponsors VEX contests and wants to give every student a level playing field.

In order for you to interface to VEX EDR using custom applications, you need to look into using a Raspberry Pi 3 with built-in Wi-Fi and an RJ-45 Ethernet connector. Then you can start developing your own TCP/IP Clients and Servers…

Or you could use two cups and a string to communicate.

Should we use a Raspberry Pi 3 for sure, wouldn’t an Apple IIe be a better choice? It’s hard for me to figure out since there is fruit coding involved.

I had the idea of using either an ESP32 or ESP8266 to communicate with a cortex via I2C which would also allow for the control of it over a simple web server or Bluetooth, but in practice I don’t know how well this would work out

Let’s keep the probing and Turing-testing contained in one thread:

Can the Ada programming language be used on the VEX V5? It is available on LEGO Mindstorm and Raspberry Pi 3 and is an excellent language for developing autonomous VEX robots…

I had the idea of using either an ESP32 or ESP8266 to communicate with a cortex via I2C which would also allow for the control of it over a simple web server or Bluetooth, but in practice I don’t know how well this would work out

@JamsG, I have mixed feelings about posting to the SpamBot thread.

On one hand it got to be deleted, because OP seems to be very prolific poster but, on the other hand, @TriDragon posts above are funny enough to keep it alive

To answer your question about controlling your robot with an alternative interface here are some relevant prior art threads:

This thread only applies to college teams. There was lots of discussion earlier this year about the partner joystick port and alternative devices that could be interfaced to it. magicode had asked about using this port and had received this answer. There had also been posts about the communications protocol in threads such as this and this. I had posted some code that could be used on a PC to communicate with the partner port but what was/is really needed is an embedded solution. To address…

How to send data from Arduino to Cortex via UART using RobotC? General Forum

There was this https://vexforum.com/t/cortex-brain-communicating-with-devices/23714/1 that had some links to earlier work. I know @fretless_kb did a bunch of work in this area. and I found this, but don’t seem to have the cortex side. serialArduino.zip (1.96 KB)

Hello, I had the idea to create a custom controller, but how would you do that with Vex? I am using the older PIC microcontroller, so would I be able to use the RX/TX communications? If I knew what is being sent over the antenna, maybe I could wire a XBee and an Arduino to sent and receive data from a controller. I don’t know. Does anyone think it is possible to make a custom controller for the pic without using and of the ports besides tx and rx, and make it wireless?

Hello all! One of things on Team BNS we have been trying to figure out is ways of sending and receiving data on the fly to be able to better debug our robots. Our initial approach to this is to use an HC-05 Bluetooth module that connects into the extra UART port on the cortex. There are a lot of advantages to using the HC-05 module like this, such as many computers and phones have bluetooth built in, so connecting to your robot should be pretty straight forward. Additionally, being able to s…

Finally, if your project doesn’t require a lot of motors or sensors, you can control 393 motors directly from an ESP8266 module from the browser on your smart phone:

Unfortunately, for many teams the season is almost over and, if they are school based, they may not have access to the Cortex or V5 system until the next school year. That is a long downtime when students could learn a lot of important skills, like the advanced autonomous programming, if they had access to the hardware. Even though VEX system is positioned as affordable robotics platform it may still be out of reach for an average middle school or high school student. However, there is an ine…

This library was developed by one of our teams and the source code is freely available from the github.

Can someone explain what this turing test is? I know wha it means, but is this an actual spambot? If it is, why is it not banned?

Turing tests are basically designed to differentiate between a bot and a human, where communication is restricted to through keyboard and mouse.

Unlike probably all previous bots on this forum, this one has exhibited some clear and convincing human-like qualities, so it was (and still is I’m sure, by some people’s interpretations) uncertain whether they are truly a bot or not. Hence, the moderators have not (yet?) made a judgement to ban the bot.

Can someone explain what this turing test is? I know wha it means, but is this an actual spambot? If it is, why is it not banned?

Yes we are pretty certain that it is an actual SpamBot. There were a bunch of topics it created earlier, that @DRow had already deleted, where it would try to sell us bogus e-books and magazines with VEX sounding descriptions for around $16. Here is an example:

We have interrogated it in this thread and 84% of the observers concluded that it is a hybrid system where spambot is augmented by the human operator to answer the most tricky questions.

Here are the test results (thanks @Taran for setting up the poll): 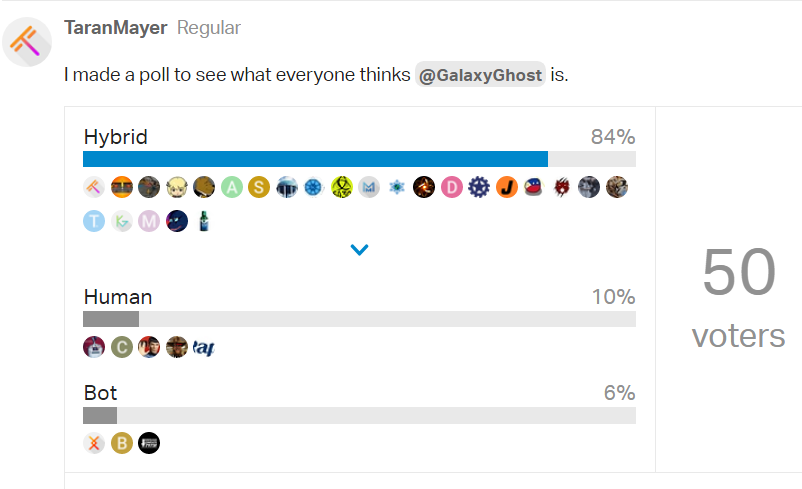 As @Barin said, it is up to the moderators to decide to either ban it all together or keep it around for entertainment and educational purposes.

However, unless the operators of the spambot farm decide that vexforum is a waste of their resources, they will just keep coming back under different account names.

Lol, @GalaxyGhost voted that the’'re a human. (The far left profile pic in the human list)

Reading the previews on the $17 books, I can firmly say that I wasn’t impressed by the content. Literally every journal had the same few introductory paragraphs, and the only thing that changed was the cover art with table of contents.

Also, I get the appeal of using a Raspberry Pi, but isn’t there literally anything else I could use? I have a deconstructed Linksys wireless router. @GalaxyGhost why can’t I use that?

As @Barin said, it is up to the moderators to decide to either ban it all together or keep it around for entertainment and educational purposes.

We are watching, but most mods are traveling back from worlds today.

We are watching, but most mods are traveling back from worlds today.

We know. So far the SpamBot attack had been mostly entertaining and TL3 users have plenty of tools at their disposal.

The forum immune system is in the process of training to recognize invading accounts and topics, tag them [SpamBot], and quarantine in the Chit-Chat channel.

Some TL3s, clearly, had too much fun with title edits, but that is stabilizing now.