What are we thinking about this one?

Idk, something with spinning around and maybe building.

some type of projectile shooter game, uh, something like ftc game, or maybe a goal you have to spin to gain control over to actually score

It seems like there will be a large central scoring zone. Perhaps some balls that you need to shoot into it? I’m hoping for a mix between Nothing but Net and Turning Point. And maybe hanging at the end.

You know what spins?

Off of immediate reaction, I can only currently imagine

A. A central scoring structure that spins (almost like FRC 2007 Rack N Roll https://youtu.be/FJtWEUfNnBE except well, it would have 360° of rotation.

C. A momentum based rotating scoring/field element where the faster you spun it the more points you got. Obviously as that’s tough to measure for human scorekeepers there would need to be a tweak.

But, I do feel some for a central scoring spot /srs, like Pitching In and it’s cheap copy Rapid React /j

I would say don’t rely on your Pitching In / Rapid React experience for this one.

This might have also been implied by the word “spin”

Here’s some leaked screenshots including one of the game elements. 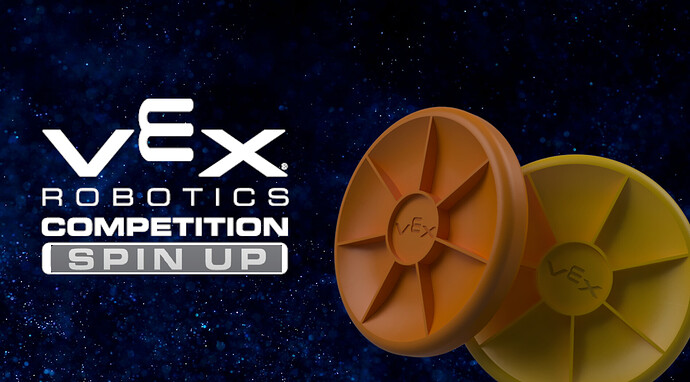 Where did you find this?

I want to believe it’s real so bad.

I don’t know what the next game is, but I will say what I want it to be, no, it NEEDS to be.

It needs to be an aggressive game, where multiple metas can form. I hate games where you don’t interact with the opposing team, one notable example being the current VEX IQ tournament, even though I never participated. Tipping point was so much fun in the matches, because you really did have to think of everything. You could play defensive, offensive, and even though scum strats came into play towards the end (where you hold two goals and hoard one in the corner) the game was pretty fair in my opinion, in regards to plays. It was not “whoever gets there first wins”, it was legitimately variable and the tides could turn, even at the end of the game. That’s what I loved about it. I’m just hoping that spin up isn’t just “grab goal, shoot, get points: also there’s a wall between everyone”.

That’s just my hot take on what is NEEDED to keep vex interesting for us all, and my last remark will be “stop only thinking about the meta, innovate!”

actually I quite disagree with you, having a game where it matters if you have a good bot and not, I have pistons and a 6m drive, sounds quite enjoyable, this game seemed to have maybe 3 fully developed strategies in main tourny season. having a game where there’s a fence and it matters if you can physically outscore the opponents even if you don’t have great funding or a lot of knowledge is what makes vex vex, this game seemed to have many extremely similar robots, 4 bar with a piston clamp, a ring system, and a back position clamp, and a 6m drive is what a huge majority of the teams have. for example turning point is a great game, tons of different designs all specializing in something a little bit different.

There was no “Spin Up” teaser, you are all crazy.

In south Florida at least, there was much variation for us. We saw a LOT of different designs. Even the 77788 guys had some crazy variation. We saw tank bots, speedy bots, we saw a couple that our team named the “baby jail”, we figured out how to steal goals from the back of other robots, it was crazy. There were very few carbon copies. If you took two random robots in tipping point down here, they would be completely different.

well from NORTH FLORIDA. quite literally the same state, I disagree, again, there was very little variation, if you could send some team numbers so I could see this variation that would be fantastic

7121E and 7121F, 77788A, 77788H was pretty strange, our alliance in the brackets during the McCarthy championship was a tank bot, there was some other really crazy ones but I forgot all of their names. There was one robot I saw that had 15 goal capacity for literally no reason. We were pretty basic in our design, but we performed pretty well in one of those tournaments

but the majority. it was still as previously mentioned, correct? most robots were extremely similar. 5 out of some 30+ doesn’t prove that majority is personal design. majority was taken from the meta.

there is definitely a meta, but it’s different from most seasons in that there are multiple ways to execute this meta, and off-meta robots can still be very successful. It’s not like some games where the only way to be very successful late season was to use a very specific type of robot.