Talking About <SG7> (And How to Counter it in a Match)

Alright everyone… I have a competition on Saturday, so I might as well share some things about this past game manual update. If you’ve been living under a rock, on December 7th, the GDC updated the Tipping Point game manual, with two major things added to it. The first one talked about SG3, but this one has been recently solved. Link talking about that and part of SG7 is here.

But let’s talk about the second thing, updating Hoarding, Possession, and SG7.

Let’s get some definitions out of the way.

So far this is normal. I’ve talked to pass teammates of mine and VEX veterans in our group, and this has been shown depending on what Scoring Object(s) is/are important. Until about the definition of hoarding…

“Hoarding – A Robot is considered to be Hoarding a Mobile Goal if it is actively blocking an opposing Robot’s access to a Mobile Goal without directly Possessing it, such as by expanding horizontally across a portion of the field.”

If you’re wondering what’s the problem of that, this makes this possible: (this is an exaggeration)

Not an SG7 violation: 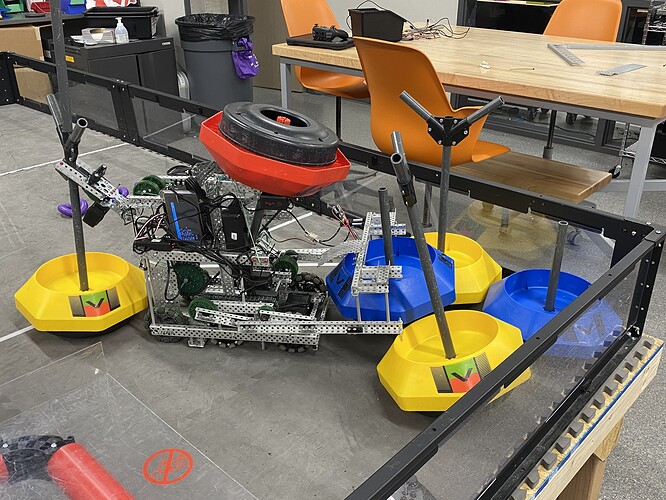 Yeah this is going to be a thing now.

I believe @Jon_Jack officially called dubbed this term “ramp camping” so this is what I will call it from now on.

So basically, from the photo, the robot currently “possesses” almost all mobile goals minus the blue alliance goal in the corner. Which is why “ramp camping” is possible. Maybe the GDC will probably update this to make this strategy illegal, but this will probably be active for the next few months.

So the question is what can we do counter this?

Let’s see a few scenarios about this with four major factors:

These match scenarios will be highly competitive with the intent that the other robot in the red alliance will try to grab the neutral goals during autonomous, and play defense during the driver control period. The robot that can Ramp Camp simply has to grab as many mobile goals as they can possibly grab and do some “ramp camping” up until the last 30 seconds. Then, “for giggles”, they can just park on the platform or just place a few goals in the platform to make there is no chance for the blue alliance can’t win.

The Blue alliance can’t do anything about it, as they can only grab as many goals before the “ramp camp” robot takes them all, and even them, they have to worry about the other robot pinning at least one robot back and forth. Even with the probability that the blue alliance are down one mobile goal, they’d still have to worry about platforming each goal and at least one robot to it, which is hard enough on it’s own.

I could really go on about the problems the Blue alliance has to face during all of this, so let’s just talk about it. Ramp Camping can be effective as shown, and from what I base from the few competitions that I’ve participated in, the majority of robots are mogo-only robots.

When I first saw this, I originally thought that there wasn’t anyway to counter this. But hey, I wouldn’t be typing this for an hour if I didn’t have a solution. (Note: this was also talked about in the forum page I linked earlier, so go check it out.)

It was Jon_Jack that made this quote that made me explore this further:

Oh yeah, it’s time to talk about those little things in the ground that no one uses!

So we know that having a ring in the alliance pole or the neutral bottom poles count for 3 points. Having two rings makes it 6 points, 3 rings makes it 9, and you see where I’m going with this. If the Blue alliance, in this case, has at least one robot with a ring intake, the Blue Alliance has a chance to win. Let’s get the same scenario going, but with that changed factor:

I would tell the math about this but Jon_Jack actually did before I had the chance to.

If the blue alliance was down 4-3 mobile goals:

What I was referring to in my original post was the more likely situation of being down 4-3. In this case, the amount of ring scoring you have to do is much less. If your opponent is only balancing goals on the platform, then:

If you were down 5-2, which on paper it’s possible, but theoretically hard to create, then you would have to have at least two ring-intake-robots that can make 20 rings for 60 points, double parking with both goals on hand for a 180 (goals in zone included), and a toss-up for autonomous. Again, not easy, but doable.

With all of this, I hope people can actually see the importance of rings, and how special they can actually be now. And hey, who knows, maybe I wrote this all for nothing, but it’s at least a solution for now.

(I’d like to quickly credit @9MotorGang and @Jon_Jack from the forum I linked earlier. Go check them out and give them some love!)

I don’t think that strategy shown in the image is actually legal. The definition of possession in the game manual is

I might be wrong in my interpretation of this rule, but it seems to me that this robot would be considered “In possession” of the blue alliance goal in the corner. It is being controlled by a concave shape, the two mobile goals surrounding it, and if the robot were to turn in either direction, the mobile goal would be moved in that direction too, at least somewhat. Also, just because the blue alliance goal isn’t touching the robot directly doesn’t mean it isn’t being possessed. For example: robots that throw goals into a large container in the back. There may be a mobile goal that gets thrown in, but is entirely supported by other goals, and is in no way touching the robot itself. I don’t think anyone would say the robot is not in possession of said goal, so the same applies here I believe.

If they could prove to a judge that they are possessing (aka moving the goals through the transfer of energy in the robot) then yes, this situation is legal because only the blue mobile goal in the corner is hoarded.

prove to a judge that they are possessing

Maybe prove to a referee, the judges don’t really care about specific matches, but they might watch a match or two as they evaluate your team for a judged award.

Wow, I somehow typed out that whole paragraph and completely forgot that hoarding only one is allowed. I’m dumb.

G3: Use common sense. When reading and applying the various rules in this document, please
remember that common sense always applies in the VEX Robotics Competition.

From the red box of SG7:
In general, unless a Robot or Alliance is intentionally and blatantly utilizing a Hoarding strategy, violations of this rule should be rare.

Quote from the GDC 20 char

There trying to say, yes there may be a “loophole” but we want compeitors to use common sense and realize that it is very difficult to write the rules without a small grey area being added. And to realize thats probably not what they meant

If the team can verify that if the robot moves, those goals move with the robot, then yes, they would be in possession by said robot

Actually this got proven that it was not hoarding by the actual person who made the picture:

Sorry for the late reply. The picture in question shows my robot in legal possession of 5 goals and it is also hoarding 1 goal. Effectively, this locks down 6 out of 7 goals. The two yellow goals are held in by a long screw, and they do meet the definition of possessed.

However, this is not a guaranteed win.

First of all, if your alliance gains possession of 6 goals, I feel like @Jon_Jack 's post applies:

At some point, the best robot should win.

With equally matched opponents, A 4-3 goal split is the most likely, possibly 5-2 if one side’s auton messes up. With the new way hoarding is defined, you can assume that each alliance will be able to “lock down” the goals. I am also going to assume that the alliance with the goal lead will win autonomous (as most autons that get more than 20 points don’t just score rings), and that no rings are going to be scored on the neutral goals. At high levels of play, you can assume that all of the goals will be elevated. This leaves the alliance with 3 goals 46 points behind.

In order to make up the 46 points without scoring goals, you have two options, parking and rings. An elevated robot is worth 30 points and a full alliance goal is worth about 30 points. This means that in order to win against an opponent with a 1 goal lead, you need to fill 2 alliance goals, fill 1 alliance goal and park, or double park.

However, your opponents also have access to these methods of scoring points. These means that to win, you need to perform 2 more of these additional actions than your opponent to make up a 1 goal deficit. So if you opponents park and fill 1 alliance goal in addition to elevating their 4 goals, your alliance now needs to double park and fill both alliance goals in addition to elevating all 3 of their goals.

TL;DR In order to counter a goal deficit, your robot needs to be able to park and score rings.

Thanks for the reply! I’m sure this is good to know for everyone!

The two yellow goals are held in by a long screw, and they do meet the definition of possessed.

depends - if the robot loses control all the time with the two screws, then not really in possession.