This is my custom video slider that uses VEX parts. It can slide a video or DSLR camera back and forth automatically at various speeds that allow for smooth video using a simple control box. It shows a practical application for VEX based construction projects.

It is powered by a 12 Volt SLA battery or a 12 Volt wall transformer. The red power switch on the control panel turns the video slider on or off. And the control knob is used to control the motor speed.

Applications that I have used this Custom VEX Video Slider for include taking panoramic photos, and 3D Stereoscopic photos and even photogrammetry, as well as recording very smooth sliding video. In addition, you can “train” the slider using three small push button switches (not shown).

Three small pushbutton switches (not shown) allow you to select which scanning algorithm to use. The default mode is just the smooth video slider control mode.

The stereoscopic control mode moves the slider to the center and then delays five seconds to allow the photographer to take the left side photo. It then moves the slider to the right exactly 6.5 centimeters (interocular distance for men and 6.3 centimeters for women) and then pauses another five seconds to allow the photographer to the the right side photo before returning to its center (home) position. These photos can be viewed side by side on a PC or laptop using a 3D stereoscopic viewer with red and green or red and cyan glasses to view the photo in 3D!

A panoramic control mode moves the camera starting from the left to the right every n centimeters while pausing five seconds between moves to allow the photographer to take a photo.

Finally the last mode is the photogrammetry control mode which starts the slider from the left side and moves it to the right very slowly.

The slider is attached to a timing belt which pulls the slider cart back and forth. In addition, it uses two VEX limit switches which are used to switch the camera scan direction. This video shows the Custom VEX Video Slider in action! 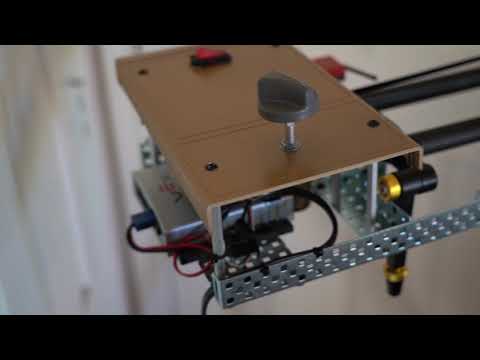 … Great use of the old cortex system

Does this mean @hero1 was behind @GalaxyGhost?

Edit, for those not familiar: fun times

Thank you! Actually this project used the original legacy VEX 0.5 Microcontroller, which worked very well considering the results I have obtained in panoramic and 3D photogrammetry and 3D stereoscopic photos.