We bought nine motors this year and seven of them died within two to three weeks of light use. We use antistatic tiles and not doing anything unusual. For all of them, we had the same issue - all of a sudden, the red light won’t turn on after switching on the brain. It seems like the issue is with the new motors of 2022. I would like to know if anyone else is in the same situation and if there is anything we can do.

How were they being used? Drive, flywheel, ect…

my team has been having problems with motors breaking. the motors would seemingly completely turn off. the port turns dark (not blinking, like when a port is blown). this has happened on two different robots and two brains. the brain doesn’t recognize the motor at all. this has happened three times, and all with motors we bought this summer. attempted solutions and tests I tried plugging them into different ports I tried swapping wires I completely disassembled one of the motors and testing i…

VEX is purportedly investigating the cause, no word yet though.

Drive, intake, and flywheel. It happened all for all scenarios. However, for flywheel, it happened twice.

Thanks! It’s just so frustrating. We have comp tomorrow and are feeling defeated already.

Have you reached out to any local teams to see if you can get some motors on a temporary basis? Your local RECF TEM can also put you in touch with some larger organizations that might have spares.

@levipope Any updates on the investigation into the V5 motor failures?

this happened to us as well with a order of new motors received a month and half ago. Three of the motors in the box were not working. As of now were trying to contact vex to see if we can resolve the issue somehow.

Thanks! I am asking other teams and hoping for the best for now.

Our engineering team is doing analysis on the few failed motors we have seen. Once that is finished we should know more.

We are also trying to reproduce this issue and not having much luck. Any feedback on the specific circumstances where this happens would be much appreciated.

We are also trying to reproduce this issue and not having much luck. Any feedback on the specific circumstances where this happens would be much appreciated.

From my understanding motors are dying through light/normal use, sometimes even within 30 seconds of being put on a robot. Hopefully others with more direct experience can chime in here. Are you saying that VEX hasn’t seen a single rev 10 motor fail throughout the last week’s worth of testing? That would be quite surprising to hear.

Not sure from the various reports if other teams are seeing the motor failures only with new brains, or with existing brains as well

In our org we’ve had about 30 motors break, all of them were new teams who purchased new motors. They all broke with etxremely light usage, even just with drive bases running around with nothing else on the robot. If an extreme use case for a motor is a tray or intake from TT, these motors were generally on the opposite end just spinning rollers or moving a drive.

I don’t know if it’s happening to all new motors and it varries in time before it happens or if it’s just some of them, but reproducing the issue seems to be just using a robot with new motors and eventually it will happen.

I took apart a broken motor and have pictures of it. This motor doesn’t like up or blink when plugged in and is unresponsive, the same symptoms of the other motors. 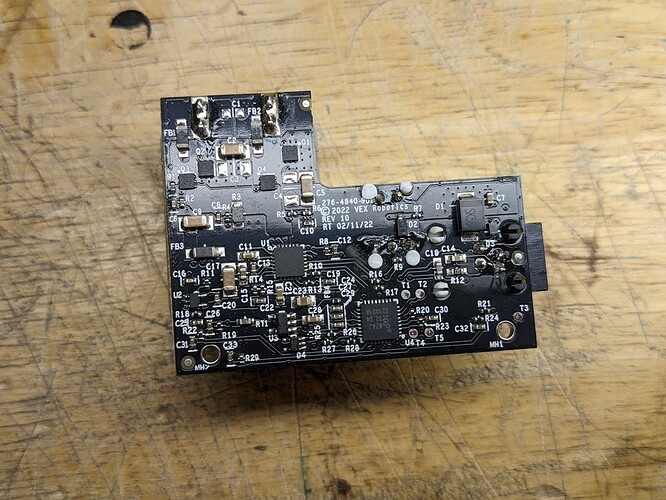 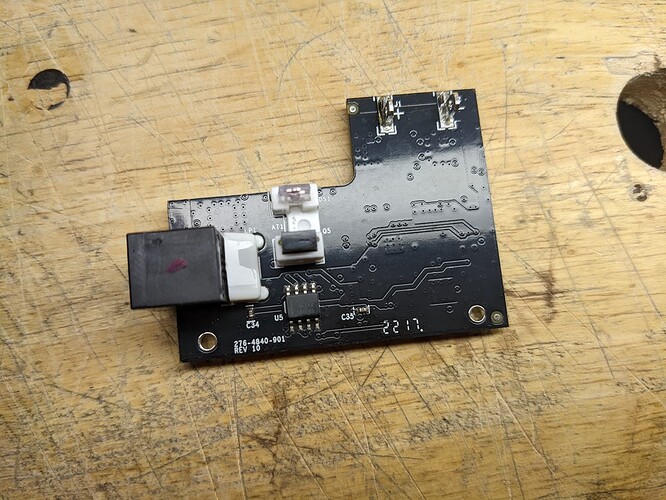 We are using a new brain. The teams having problems are all new teams, so new brains and new motors.

Are you testing with a new brain? Maybe that will increase your chance to reproduce the issue.

We had one motor die on the intake, the intake had just a little bit of friction, and it was running at 95% power. Then we had two motors die on the flywheel, the flywheel had minimal friction and we kept the acceleration steady and slow enough. I recieved these motors in a V5 Super Competition Kit in August of 2022.

Same problem here. My group had 2 bots at competition, we lost 6 motors that day, light, normal use (nothing geared high or overloaded.

The Vex site says “thousands of hours of engineering” went into the new v5 motors… apparently not thousands of hours of testing though? As an electronics engineer, I cannot believe these circuits do not have a shut-down to protect itself from dying (overload, overheat, etc). Or, if they do, these board revisions are faulty in some other component. Vex desperately needs to make this right.

@levipope please update this thread when you have a solution. Thanks!

Our team has trouble with the motors too, but its only for the motors bought from the new suppliers. None of our previous motors has died yet

I apologize for the radio silence on this thread. I just want to let you know that this topic is on the top of our priority list and we are working on it diligently to make sure it gets solved.

Here are the updates I have:

We have collected enough failed motors to know that the issue only happens on revision 10 of our motor PCBs. What we have determined is that something is causing a diode to fail on that revision. When that diode fails it brings the power rail down on the entire board and the processor will not boot.

We still don’t understand why some motors fail and others don’t. But we have been able to replicate the failure but only by aggressively back driving an unpowered motor. Obviously that is not how all of these failures are happening. Unfortunately, we have not been able to replicate the issue on a robot. But it could very well be that we are not accurately able to recreate the environment where these failures are happening. Regardless, we are still trying to replicate and are also working on solutions to protect that diode and resolve this issue.

We are currently working through all of our inventory to make sure we do not ship any Rev 10 boards. As soon as we have a solution for this issue we will arrange to rework/replace the remaining rev 10 boards that have already shipped.

Thanks for the great update! I’m glad to hear vex is working on it.

Quick question: what do you plan to replace the Rev 10 boards with? I can’t imagine that the motor shipment time will do anything but go up, but I’d like to know if that is definitely the case or if there is another plan. I’m imagining teams sending in motors to be reworked/replaced expecting quick turnaround times and ending up not having any motors rather than having potentially fallible motors.

Great question. We will need to figure out a few things before we can nail down exactly how this will work. First we have to find out how many pre rev 10 boards we have in the warehouse and at the factory. Second we need to know what the final fix is for the rev 10 boards.

Once we answer these questions, the goal will be to throttle the RMA process so that we will only take the motors that we can quickly replace. Hopefully that will minimize the down times for teams.