my team has been having problems with motors breaking. the motors would seemingly completely turn off. the port turns dark (not blinking, like when a port is blown). this has happened on two different robots and two brains. the brain doesn’t recognize the motor at all. this has happened three times, and all with motors we bought this summer.

if it helps, these have all been drivetrain motors, but three quarters of our motors are on the drivetrains of our two robots.

if anyone has had this problem or knows the solution, please let me know.

Try reading this thread. Dead V5 Motors - VEX V5 Technical Support - VEX Forum
Apparently there is a substance you can buy which may reduce the chance of motor failure.

What gear ratio and/or rpms were you getting? Also what color motor was it?

What gear ratio and/or rpms were you getting? Also what color motor was it?

Not exactly, the gears do not have to be the same size, but the overall ratio needs to be in agreement between all the gears. 200 rpm motors geared up 72:48 will produce a same ratio as 600 rpm motors geared down 36:72. so you can mix and match motor speeds and gear sizes, as long as the ratio comes to the same thing, and no 2 motors are trying to turn a gear at different speeds. If these motors are all on the same system that is, op might be referring to separate motors on separate systems.

Regardless, this issue does not sound like a mechanical issue, friction or mechanical problems will cause motors to stall and overheat, but they won’t just break them like this.

I’ve seen a number of causes for a motor to just stop working like this, sometimes it’s due to a faulty cable (perhaps bending the pins in the motor port and shorting them? I’m not entirely sure), sometimes it seems to be static related, and other times it just happens without any easily discernable explanation.

Judging from his previous posts, it sounds like these motors were from 2 different robot, and I’d assume one robot’s drive uses a 72:48 and the other uses a 36:72.
Correct me if I’m wrong, of course

Yep! I have one 300 RPM robot with 4 inch Omnis, and 300 RPM drive with 3.25 inch Omnis. Every single motor on each drive drives the same size gear.

Note: I just noticed one of the motors on the second drive may not have been spinning at all, which could have caused the other two motors on that side to work harder.

Do you need to see a picture of the drivetrain to fix the problem?

Do you need to see a picture of the drivetrain to fix the problem? 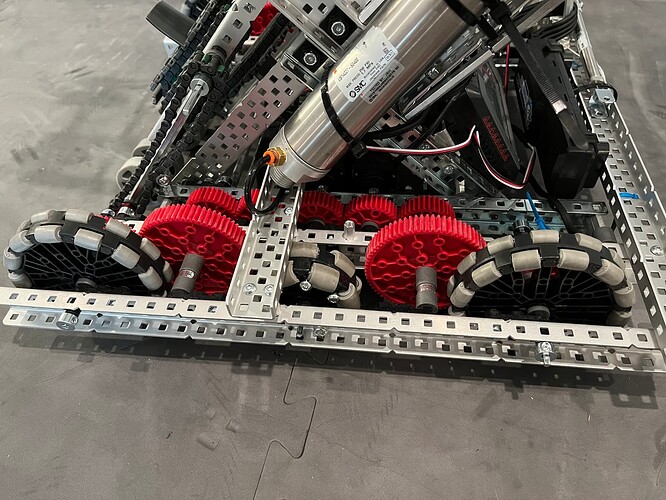 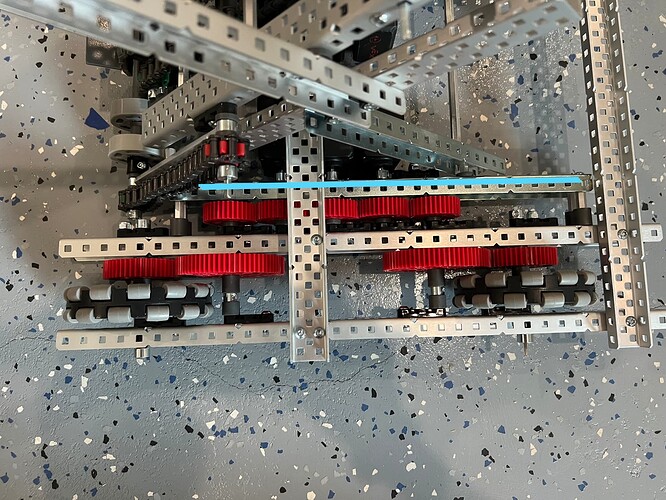 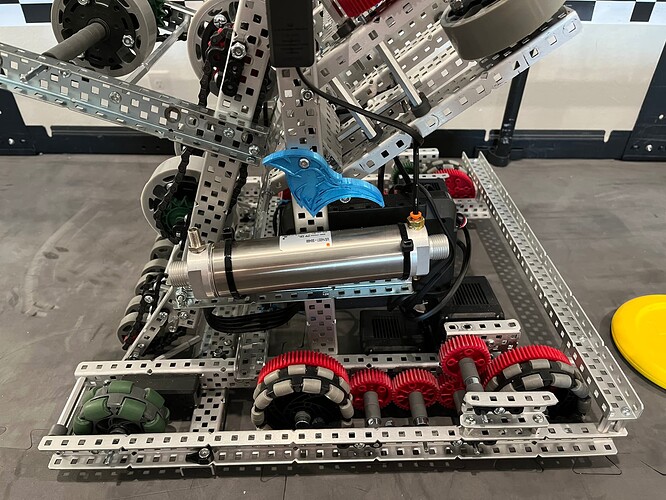 Unfortunately, that sounds like a static electricity issue that many teams experienced right after introduction of V5 system, in the fall, when schools start turning on building heating systems, thus resulting in dryer air that allows faster accumulation of the static electricity charge.

For example: Two Dead Ports In 1 Day, V5 port burnout, Broken V5 Ports... and How to Fix Them!

Does your school just turned heating system on and do you have new anti-static tiles from VEX or still use old tiles without applying anti-static spray?

From what you’re saying, I’m guessing the motor port would have blown, am I correct? because all the electronics inside all three motors seemed to work fine.

The motor port was dark, not blinking, and the brain port it was on worked with any other motors and sensors.

Is there anything I’m doing wrong, or do motors themselves break from time to time like brain ports?

Funny thing we just experienced the same exact issue on our first build of the season but were reluctant to post/talk about it because it invariably turns into a naggy “stop shuffling your socked feet around / this is real life get used to adversity / your team should learn how to build better / go look at other threads and stop wining” etc… Long story short this is the first build of the season for us, just a chassis. We have the antistatic tiles on the field. We built the chassis with 4 brand new antistatic omniwheels. Tested, drove around, worked fine. Then realized omnis make us vulnerable to pushing sideways in the spin the rollers battle. So we mounted 2 of the brand new anti-static traction wheels (thank you VEX for finally making the diameters right) centrally to prevent that. We placed robot on field and half a minute later 2 motors died. Motor ports were black not red, not blinking fast, just a lack of any light. We have fried an immense amount of brain ports over the years and got used to it by now. Motor port blinks fast, you shrug and know what to do. Plug into a new port, put tape over the burnt one, reprogram and go on, until you run out of ports, complain to your coach/mentor who tells you we’re out of money and/or brain is out of stock or back ordered. You cry, miss a tournament or two, pick yourself up and become tougher. That’s life. You don’t like it, quit. Got it. But this is new, we never burnt motors like that. We did the stupid first, which was plug 2 new motors on different ports of the brain. Drove around, banged into the wall a few times, then when jumping over one of the barriers, one motor burned. Same symptom. Dead, port on the motor black. But strangely, the port on the brain fine. We stopped to think and built a matrix of all possible things (even if completely absurd).

We tried all of the above until we achieved the most frictionless chassis we ever built but were still burning motors (9 in total - mentors were kind enough to let the team experiment and try to figure it out and not complain about the expense that will come out of their pockets).

The only thing that stopped the madness was replacing the V5 brain. The original brain went through an entire season last year and didn’t give us much trouble except the occasional burned port and a few white screens during matches (yes replaced the power cable as well). Has only been a week but we have not burnt motors yet (also we don’t have any more to burn which causes stress and anxiety and people don’t want to drive the robot anymore). Basically we still don’t know what/when/how/why went wrong

Weird. I broke 2 motors on one brain (these motors never worked from the start), and on our second robot with a new brain, I broke a third motor. Switching brains didn’t work for me🤷🏼‍♂️.

What are you using the motors for?

There are many threads on static issues: complaints, notes on static spray, anti static tiles, dead motors, dead brain ports, ESD brain protection, and so on. What I have NOT seen (and if there’s a thread please point me to it) is an actual measurement of the static levels involved, where they are actually generated from, how they build up w/o discharging, and building practices to prevent all of the above. I’ve sent a few PM back and forth with a member here regarding these issues. They point…

I would warn against this generally. It can both raise the friction on the shaft and start to wear on the metal, getting shavings in places you don’t always want and damaging parts (eventually). I instead recommend using a different technique for static discharge such as cut up wires grounding the shafts to the frame. If you hold them in place properly, they add almost zero friction and help keep the shafts from being isolated with the motors.

I gave the short version. If you go through the whole thread, it’s mentioned to leave a gap the thickness of a sheet of paper or fingernail. The shaft’s normal movement will cause enough contact to happen w/o friction being an issue. Additionally… if you use grounding wires, you must get through the insulating layer of aluminum oxide covering the metal.

Thank you for pointing out that the wires must be grounded thoroughly. I had neglected to mention that. I maintain my opinion about avoiding metal on metal contact in rotational joints as much as possible, but if it works for you, go right ahead. I would encourage people to use wires for grounding rather than shaft collars on their flywheels (if applicable) because of the relative accuracy and importance of that system, but yes, shaft collars are the easy way to do this. Just keep in mind that there’s a reason that you don’t often see joints like these in commercial or industrial settings.