Hello, team 1715S here with more catapult issues. As you will see in the video below, the beams holding our catapult fly off when the catapult shoots. We can’t lower the power as that power is just enough to send the ball into the pitch. Does anyone have any thoughts on how to fix this? By the way, thanks to @JacobM and @u89djt for helping fix our former issues. That’s a jpeg, containing fewer than 20 chars of information…
While we’re waiting for the video, I suggest looking at your other pivot options like shafts, and maybe consider building together everything that rotates in sync.

Sorry, here is the video I would try attaching a shaft through both gears.

Oh yay! I love threads like this! Because you’re basically asking someone to redesign your robot for you, are you not?

I’m not going to let you get away with that. Not without learning something first, at least.

So let’s think about what the design process actually is. First we identify a problem. Next, we decide on a potential solution. Then we impliment the change and observe the results. Wash, rinse, and repeat until the problem is solved.

So let’s start working through this problem together. What is the problem we’re trying to solve? I’ll give you a hint, it is not that the pins aren’t strong enough. It more has to do with how you are using the pins outside of their operational range.
You wouldn’t make a skyscraper out of construction paper and popsicles sticks and then blame the popsicle sticks for being too weak, would you?

I don’t think I saw anyone asking to redesign a robot, just asking for help, lol.

@1715S - So you have identified a problem, the force of the catapult is causing the pins to come out on full rotation and firing. Try deciphering the problem listed above to figure out what to test. Make sure to document things you try in the notebook and what you had to change to make this work. I’m sure this kind of stuff will make judges hearts melt.

If you get stuck, you may want to search other threads on the forum, as this issue has probably come up on several other threads before.

bruh. one of the main issues is that u have WAYYYYYYYYYYY TOOOOO MANY RUBBER BANDS. Like too much. Like way too many

I would reccomend using less rubber bands, positioning them BELOW the edge of the catapult, and use less speed in the gears for the catapult. There is too much g-force/acceleration for the pins to handle both the rubber bands and centripidal force, so you should try to solve the force changes on the pins. also, capped pins will help.

Well as I have many experiences with these type of problem, first I will recommend putting two balls on your catapult to see if that will work. If it does not then add stronger pins.

The best solution would be to attach the catapult assembly to the gears using axles.

Alright, it doesn’t look like I will be getting engagement on this post and no one has just straight up posted the solution I was going to work towards (though some are eluding to it). At the risk of soundling like some other forum users, I’ll talk to myself. Please enjoy this internal monologue that has become external.

Well, Brandon, if I have to identify a problem… I’d say the catapult is too strong for the pins on the choo-choo mechanism. But I can’t make the catapult any weaker, because it just now is barely making it into the goal. How can I redesign my robot without removing rubber bands?

Perfect! Let’s see then. So would you say the force of your catapult obviously too much for the pins?

I guess so. I could just replace the pins with a stronger option? Like a standoff or an axle?

Maybe! That’s a good idea, but let’s say hypothetically that we could make the pins super strong! Like so strong they wouldn’t break. What would be the next thing to fail?

The gear is still moving, so maybe the gear? Or maybe the links themselves would break? The links are only held on with pins too…

Great points! So how do we take the force off of all the moving parts? Does the catapult break itself when you catch the catapult before the end of it’s travel?

No! It doesn’t blow up if I stop it before the end of it’s travel! That’s so weird. I wonder if I could build a structure that would be really super strong and rigid that would stop the catapult before all of the linkage parts get completely stretched out.

That, my friend, is called a hard stop. You could totally do that. In fact, the hero robot Fling that VEX released has that exact mechanism at the top of it to do exactly what you are looking to do. The hard stop reacts against the actual catapult arm and takes all shock loading away from the linkage and puts it into the structure and the catapult arm. 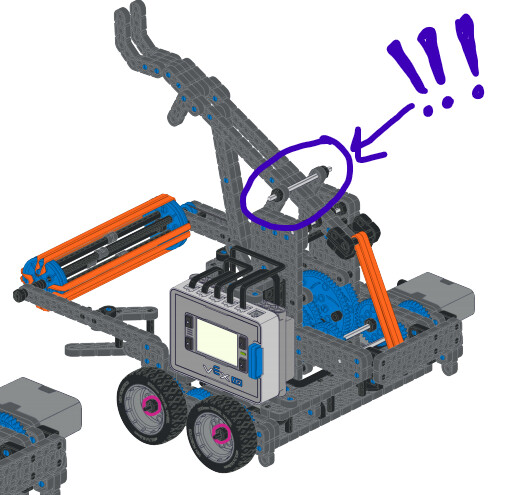 Wow you really wanted that problem solved. Also maybe his/her robots catapults range of motion is the problem, in the sense that it does not travel enough to create enough momentum for the ball to reach the goal.