At this time, Robot Virtual Worlds as it is known in ROBOTC is not planned for VEXcode IQ Blocks. We are, however, looking at ways to provide interactive experiences within the VEXcode IQ Blocks software for future versions.

“My Blocks” as Scratch 3.0 uses them will be a future update beyond the 1.0 release.

“Saving Data” is a bit more difficult due to the memory limitations of the VEX IQ, however we planning on adding datalogging and sensor viewing capabilities in a future update.

The core of the block-based engine is based from Scratch 3.0 (licensed under a BSD license). There is not a public repository for the VEXcode IQ Blocks.

We are continuing to evaluate the potential for both LINUX and Raspberry Pi flavors of VEXcode IQ Blocks, but do not have anything for a planned release at this time.

Thanks. Consider then an online browser version.

An install-free online version is something we plan on developing once we have the first 1.0 versions of Blocks and Text released!

I’m hoping that this will eventually be built into Scratch like the Lego modules. I know you would still need a browser plugin but to have this actually part of Scratch would be killer.

OK, I played with this for a bit. No bot here.

But this is amazing.

I won’t have to teach this anymore. I’m done. I will never again have to explain what “setmotortarget” means. Everything is in plain English and makes sense. The contextual help is through and awesome.

I would only like to see it auto configure the motors and sensors like Robot Mesh Studio, but this is such a move in the right direction that I am beyond good with it. I never even thought about naming directions. That’s awesome.

This move alone is going to double the number of Elementary teams doing programming given how popular SCRATCH is. The kids will be teaching their coaches.

When I installed on Windows 10, everything went normally. When I did the WIndows 7 install, Windows had a moan that the publisher of the driver was not recognized. You can just push past and install anyway but some schools might find that tricky.

Definitely not the intended experience - we’ll take a look further on Win7. Please PM with any extra info you might have (32/64 bit, any special system settings, etc). Thanks!

Since it’s using Scratch 3.0 Blocks, is there a plan to be able to code vex in scratch down the line?

Also, will there be a way for students to save their work in an account rather than just onto the computer? It would be extremely helpful!

Integrating VEX into the online Scratch 3.0 system requires becoming an official plugin with the Scratch team - something we’re investigating but cannot add on our own.

All kinds. I encourage kids to start creating their own functions/blocks as soon as possible. One of the primary reasons is to organize their code and make it easier to read, as well as increasing efficiency by reusing code. It also helps them realize that the commands that they are using are often just functions that some other programmer has created. And what they are doing when they create their own blocks is extending the language for themselves.
It’s good practice for them to recognize logical chunks of code that can be built into blocks, or text based functions.
Most of my teams create functions that create and initialize variables that are needed, they create functions to do initial on field calibration or positioning, they might have functions that read the controller. Really whatever makes sense for what they are trying to accomplish with their program.

I tried downloading and installing the Mac version today and was unable to open the dmg file. It states the image is not recognized. I am using Mojave 10.14.5.

I tried downloading and installing the Mac version today and was unable to open the dmg file. It states the image is not recognized. I am using Mojave 10.14.5.

Doing some googling, it seems like this most often happens when your download of the .dmg is corrupted in some way. Try redownloading the .dmg and see if that fixes it. FWIW I was able to mount it no problem from my mac, also running Mojave.

Well done to you guys! This is definitely a huge addition for the programming tools. From an education perspective, I believe a lot of younger age students are going to appreciate the familiarity of using something that is scratch-based. Definitely going to download this later and give it a whirl!

A bit of a sneak preview for the 1.0 release in a few weeks… downloading to a VEX IQ Brain via the Smart Radio from an iPad. 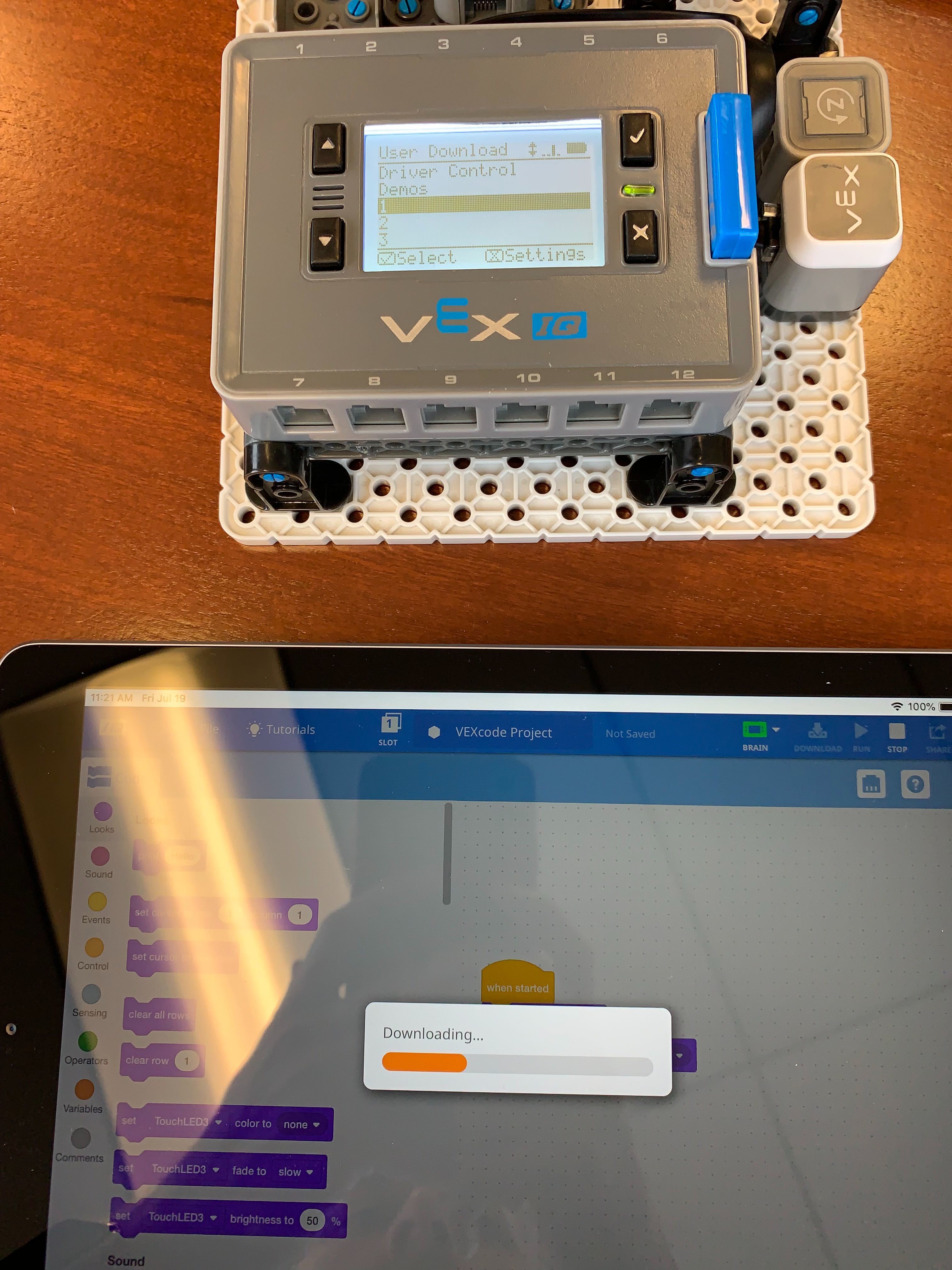 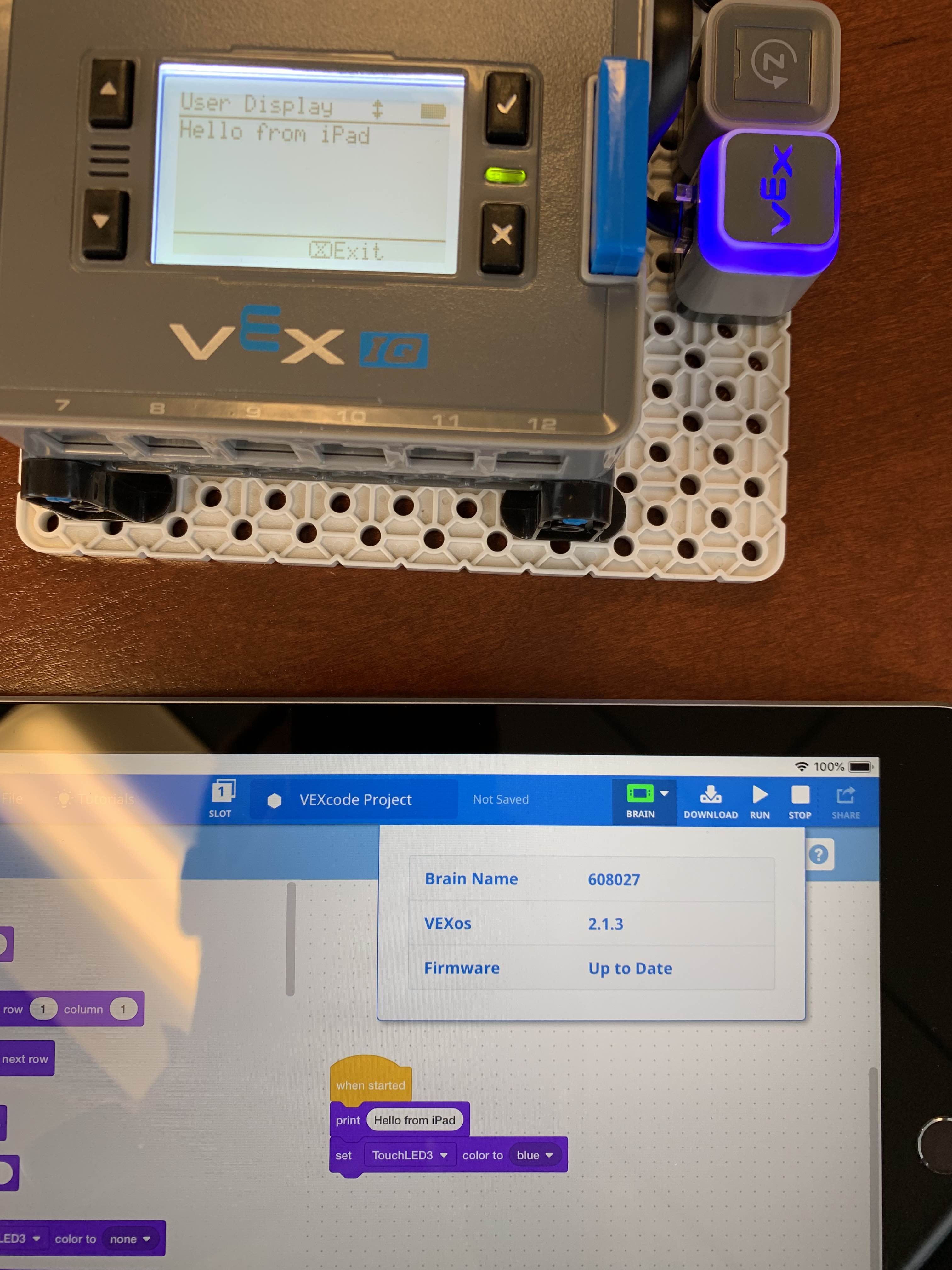 Looks great! Will 1.0 support downloading via Bluetooth on all platforms? Would be great to do this from a laptop as well.

the goal would be to support wireless downloading on as many platforms as possible.

Please! My USB ports are dying… Thanks for all your work!