The VEX Robotics team is happy to announce the release of VEXcode VR! You can experience VEXcode VR by visiting vr.vex.com

VEXcode VR includes Virtual Playgrounds - choose from different virtual 3D playgrounds to take advantage of the virtual robot’s features. Control your point of view as the robot runs your code. Visualize data on the playgrounds dashboard. Playgrounds include a grid map, an art canvas, and a walled maze. Many more will be added.

Challenges and activities (https://education.vex.com/vr/) are also available with VEXcode VR - our team of education experts created approachable activities that can be implemented easily. Activities are in Google Docs, so teachers can copy and edit the activities.

This first release of VEXcode VR is a “Preview Release” - while fully functional, we will continue to add more features as fast as we can. Use the Feedback feature in the top right corner of VEXcode to let us know what you like and what is missing. Below are some of the planned features on our roadmap for VR over the coming weeks and months.

Long term features to be added:

So when will VEXCode 2.0 and VEXCode Pro be available?

Sorry about questions, I’m not trying to be annoying.

We’re still targeting after “Virtual” VEX Worlds - sometime in the May timeframe. Our entire teams priorities have shifted to VEXcode VR over the last 3 weeks - but VEXcode 2.0 is still on its way!

is text code supported yet? like c++ or should we see that in the future?

is text code supported yet? like c++ or should we see that in the future?

Long term features to be added:

Along the same timeline for VEXcode 2.0, we’ll add Python support to VR.

Great I love it. Especially the education activities under the stem labs.
Is it supposed to work on tablets and Ipads, as I get a message about Unity WebGl not supported when I start up the playground or do I need to download that on those devices?

That’s just a message from Unity3D (the core of the Playgrounds) since WebGL is still experimental on some platforms - you can ignore it for now and we’ll work to hide it in a future build.

But yes, it works on iPads and Androids.

ok ignored it , but all I see is black playground?

We’ve found that the Unity Playground does take a while to load on most tablets unfortunately. Internet speed and the age of the tablet both factor in. We are working on a loading progress bar and hope to reduce the load time in future releases 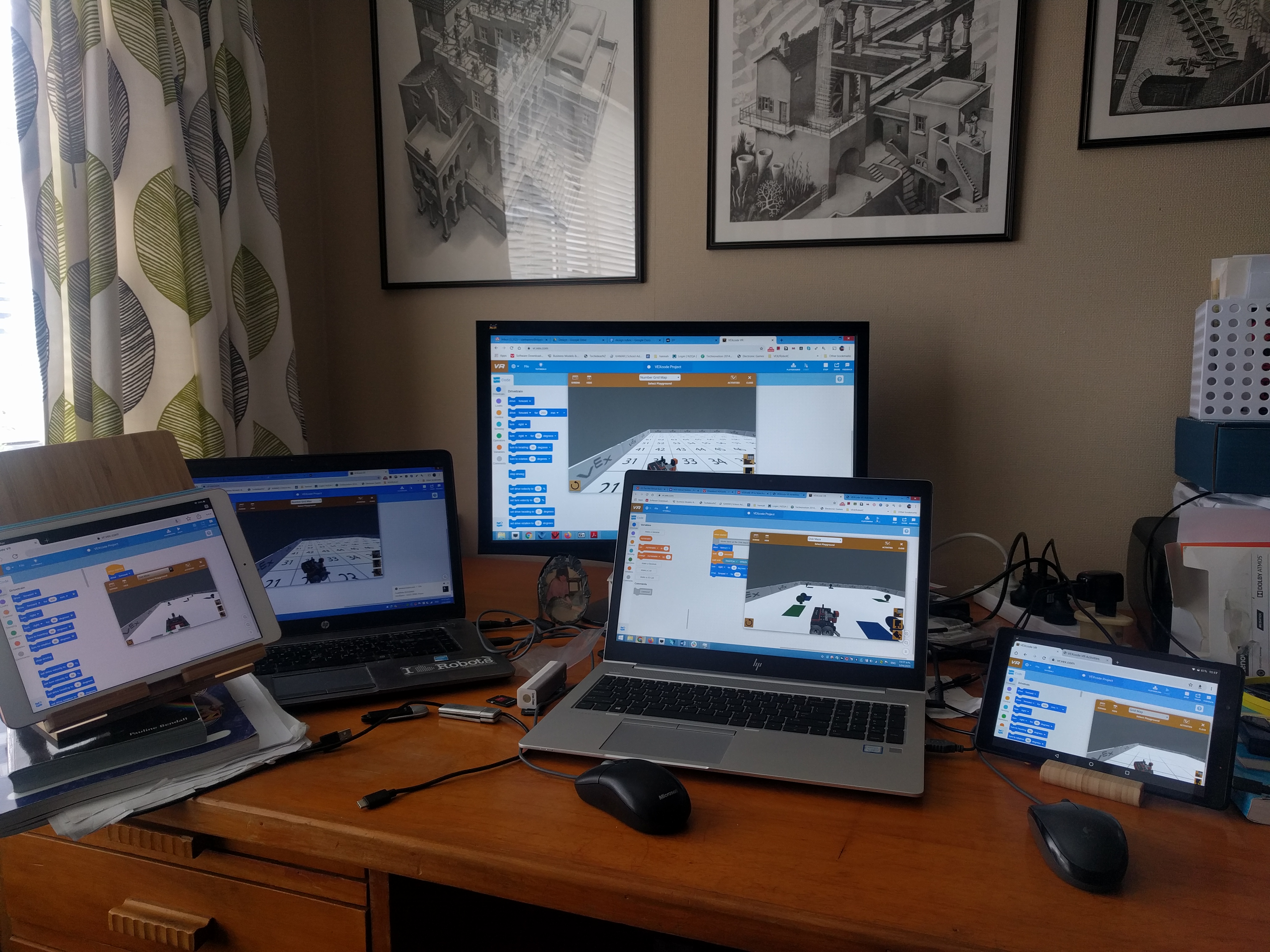 got it working on PC x2, iPad and a tablet. Patience is a virtue

FYI, we’ll be hosting a VEXcode VR webinar, and it starts in 15 minutes!

Man, I forgot how utterly perfect robots behave virtually. Can we have a random error feature (that is disable-able) that gives you a little error on your robot?

Hi, I’m trying to upload some v5block programs to vexcodeVR, but they don’t seem to be working. How can I use the programs we’ve created for robots in the past with VexcodeVR to test them while my students are away from the physical robots?

Each VEXcode application has its own set of blocks, so they’re not cross-compatible at this time. You’ll have to start your VEXcode VR projects anew.

It would be epic if it was made compatible with virtual reality headsets like the Quest and Rift/Rift S.

Thank you for the great program you created for the students and teachers. You save me a lot of pain because the students doesn’t have the physical robots. Vexrobotics is the only one right now that supports Ipads and students do not need physical robots. Great job, Thumbs Up. However, I received the following error: "Type Error: undefined is not an object (evaluating ‘window.webkit.messageHandlers.setIQBrainID.postMessage’). Thank you again,
Ms. Mejias